Pit stops at all levels of motorsport have always fascinated me.

From the minutes-long ordeals you see on vintage highlight reels to the gas-splashing and frenzied buzz-buzz-buzz of five-lug wheel changes in NASCAR to the seconds-quick endeavors in Formula One, pits stops are an inevitable change of pace in nearly all top-level racing series.

This is especially true at an endurance event, where you aren’t just swapping for fresh tires but also a fresh driver.

This is why I spent as much time as I could in the WeatherTech Raceway Laguna Seca pits at the California 8 Hours that Sara and I attended last month.

There’s a lot more to a pit stop than what you see on TV, and there’s a lot more happening in the pits at endurance race like this versus a series where you just see quick wheel changes. Each move the crews make here is critical, too, capable of costing the entire team the weekend.

Over an eight-hour race it doesn’t make sense to try to save a second or two on an operation as dangerous as refueling, so the regulators of the series require 101 seconds for GT3 and GTC cars and 145 seconds for GT4/GTS and TCR cars if you fill up. Although this particular minimum time limit is set in place only if you’re refueling the car, there are still plenty of ways to exceed this time if you aren’t careful — especially if there’s damage or quick setup changes are required — because you aren’t allowed to work on the car while fueling takes place.

It’s also worth pointing out that the GT4 class doesn’t use center-lock wheels, meaning that the pit crew has to hit each wheels five times the old school way, hence the extra time required for GT4 cars in the pits.

From the pits it is ever more apparent how much of a team sport racing really is. The drivers tend to get the glory, but the tools and teammates here can make or break any race day. It’s cool to see how much engineering goes into this part of the weekend, too.

Pit strategy always plays a big role, and although it might not be as do-or-die here at the California 8 Hours as Formula 1, teams also have a lot more constraints to manage. Each driver is allowed a maximum single stint of 65 minutes and a maximum of 195 minutes over the eight hours. Also, each driver must complete at least 60 minutes behind the wheel, so you really have to do the math to figure when is best to take the time penalty to refuel, or just do a tire and driver change.

Talking to a couple of the race engineers was quite interesting, as there’s so much more to it than I previously thought. You might start out the weekend with a handful of optimum potential strategies, but you also have to react to what other teams around you are doing. Plus, there’s always the factor that you don’t have any idea what will actually happen on the track, and you’re constantly required to adjust your pit windows to accommodate damage, flat-spotted tires, sick drivers, or whatever else may come your way.

To ensure each of these conditions are met, and that nothing fishy goes on during the pits stops, a couple dozen SRO officials patrol the pits and garages throughout the duration of the race.

A Bit Of Chaos

Over any eight-hour stint of going all-out wheel-to-wheel with dozens of cars who’d like to take home a victory, mechanical failure is inevitable.

Around the halfway mark the garage of the Wright Motorsports Porsche 911 GT3-R lit up and all of the mechanics ran out, yelling, to push the car into their garage.

As the team scrambled to diagnose the issue the driver was having when shifting gears, I took the opportunity to get up close to the battle-beaten car.

It’s a great time to take in the details, and those with a general admission ticket are usually fine to take a quick peek at things as well. Just keep in mind you’re surrounded by a dozen guys working in a panic to get the car back on the track as an eager and edgy driver sits waiting — move swiftly and don’t linger.

The team tore the car half apart, and I took advantage of a moment of stillness to look inside the car to see what was going on. I also took a moment to ask a mechanic if it was a gearbox issue, to which he curtly replied, “Just because we have trouble shifting doesn’t mean it’s the gearbox, right?”

My welcome worn out, I scampered off.

Unfortunately for the Wright Motorsports team the issue wasn’t something that could be remedied and car number 912 was retired after leading the race earlier in the day. When you’re watching from home on TV you almost always see the frustration of the drivers when there’s a mechanical issue, but what you don’t always see is the disappointment in dozen other guys on the ground supporting the car. However, the team did have solace in the fact that their sister car would go on to take third, as covered here.

It’s crazy how quickly the calm in the pits can turn to chaos when the car has an issue. The guys literally sprint around the paddock to get things back together.

As the Honda Team Motul group worked to repair and reinstall an upright (or, more likely, an associated part), their pilot remained in the driver’s seat, covered in sweat, patiently waiting for the opportunity to play catch up.

His chance came and the Acura NSX GT3 Evo was shortly back at it again.

From the panic of an unexpected repair to the urgency of a routine pit stop, the intensity in the pits is always high when a car comes in. Click play above for a quick look into what I’m on about.

I can’t think of another sport where the seconds and minutes between the action is so intense, but pit stops are just one more aspect of racing that makes it so good to watch.

Anything can happen, always, and it’s the job of the unsung heroes in the pits to manage both the known and the unknown.

When The Ghosts Of Motorsports’ Past Come Out To Play 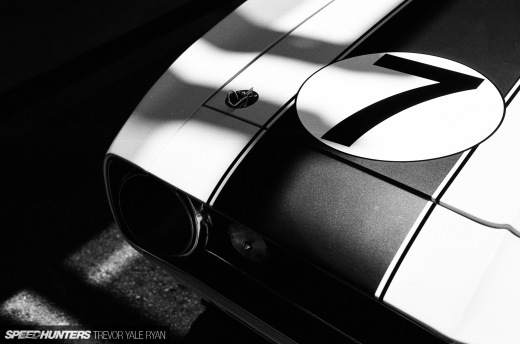 This is a great piece. Loved this story and the sentiment it carries.
Well done!

Great behind the scenes coverage

Awesome coverage Trev. How about a look behind the scenes at one of these big drifting events for comparisons sake?!

A little more depth into the tech of: centerlock wheel guns, fuel transfer systems, air jacks, skates to move cars in and out of garages, etc would be super interesting.

the photos show emotion and they are really amazing!

to repair and reinstall an upright (or, more likely, an associated part)


I see what you did there