When was the last time you saw a Porsche 917 in person?

For many people, the answer will be ‘never’, however, and luckily for me, it was at last year’s Goodwood Festival of Speed, when the Gulf-liveried 917K took to Lord March’s driveway.

It looked sublime, it sounded incredible, and it felt special.

When was the last time you saw more than one 917 in the same place?

That, well, that’s a new one for almost everyone I’d imagine, but at last weekend’s 77th Goodwood Members’ Meeting that’s exactly the sight that greeted the Speedhunters team as we entered the prestigious Goodwood Motor Circuit paddock on Saturday morning, as five 917s in various guises sat side-by-side.

And then later out on track. Only at Goodwood, and only at Members’ Meeting.

The 917 is a monumentally important car to Porsche, and sports car racing on the whole. The product of Ferdinand Piëch’s infatuation with achieving a Porsche victory at Le Mans, the 917’s very existence, and indeed the golden era of sports car racing, can be traced back to the World Sportscar Championship’s ever fluctuating rulebook circa 1968.

The Commission Sportive Internationale (a competition arm of the FIA), trying to instill increased safety at high-speed circuits announced that from 1968 onwards Group 6 Prototype Sports Cars would be restricted to 3.0-litre engines, while Group 4 Sports Cars would be allowed to run up to 5.0-litre power plants. These would be need to be homologated to 50 production units.

This latter part was the crux, as the sudden rule change, alongside the cost of building and selling 50 homologated units put the nose out of a number of big manufacturers. Porsche were still racing the 2.0-litre 907, and the 3.0-litre 908 was in production to be introduced later in 1968, while Hans Mezger was working on a 5.0-litre flat 12 aircooled engine behind the scenes in Stuttgart.

Still, Porsche had no car for the engine, and no desire to build 50 to satisfy the CSI.

But then, with the championship receiving lacklustre feedback and falling in popularity, the CSI made the vital call to reduce the minimum production quantity from 50 to 25. This was all the encouragement Piëch, and Porsche, needed to begin work on ‘Typ 917’, and chase after Piëch’s dream of dominating at Le Mans.

Like a man possessed, the 917 went from an idea in Piëch’s head to a physical machine in just ten months. Porsche displayed chassis 001, a white 917, numbered so with green accents at Geneva in March 1969, and built the 25 production units to satisfy the CSI.

That white and green car is the very same one that you see here. It’s the prototype 917, chassis #001.

The car was light years ahead of its time, and constructed of lightweight and exotic metals and composite materials, it was physically light too – the chassis itself weighing just 42kgs, with the complete car tipping the scales at just 800kgs (1,763lbs).

Parts of Mezger’s ‘912’ engine (so-named to apparently cause confusion in the press with Porsche’s four-cylinder 911 that was in production) were refined to shave further weight, and the gearknob was, famously, made of birch wood while the tubular chassis directly carried fluid to the oil cooler up front and back again.

The issue was that the 917 was initially… not very good. In fact, it was outright dangerous. Porsche drivers reported that the car was blisteringly quick, but displayed terrible handling characteristics at high speed – the 917 was designed to be low drag, but at speed the rear of the car would lift an extraordinary amount.

It also wasn’t very good on twisty tracks either, and in 1969 the 917 sat in the wings while the 908 enjoyed the limelight, briefly.

Short-tailed versions of the 917 were developed (the 917K) as well as a low-drag longtail with improved aerodynamics (917LH) – the Porsche started to win races. Finally, the 917’s long-awaited big moment of victory came during the 24 Hours of Le Mans in 1970 when the red and white Porsche Salzburg #23 917K finished in first place, followed by the Martini Racing #3 917LH in second.

Looking at the 917 today I still find it incredible that Porsche even built it in the first place. It’s a machine so extreme and risky that no manufacturer would entertain it in modern times.

A true embodiment of the golden era of sportscar racing.

Friend of mine drove one of these one time at 85% for a shake down before an owner sold one. He described the chassis as shit.

Always found that funny, people glorify this car but at the end of the day its from the 70s. By todays standards this thing is probably garbage haha.

It wasn’t very good when it was built either (as mentioned). That doesn’t make it any less important - it was an outlandish project with a singular goal in mind which it achieved. For its time, the thinking behind the 917 was more extreme than any other manufacturer came close to - you’d certainly not see an OEM taking risks like that today. Its rarity controls its desirability and price too, rather than its quality.

And it's pretty too!

"...while the tubular chassis directly carried fluid to the oil cooler up front and back again."

This is an old VW/Porsche trick from WW2. I found out about it looking at a front subframe from an Audi at the junkyard. I noticed that the tubular subframe was running boosted air through it, and I was astounded by the genius of that. That's a twofer right there: the Holy Grail of engineering. I looked it up and it was a trick developed in WW2, probably by Porsche.

Anyway, that is the kind of design that you aim for.

I took a photo similar to the cover at Rennsport Reunion last year. 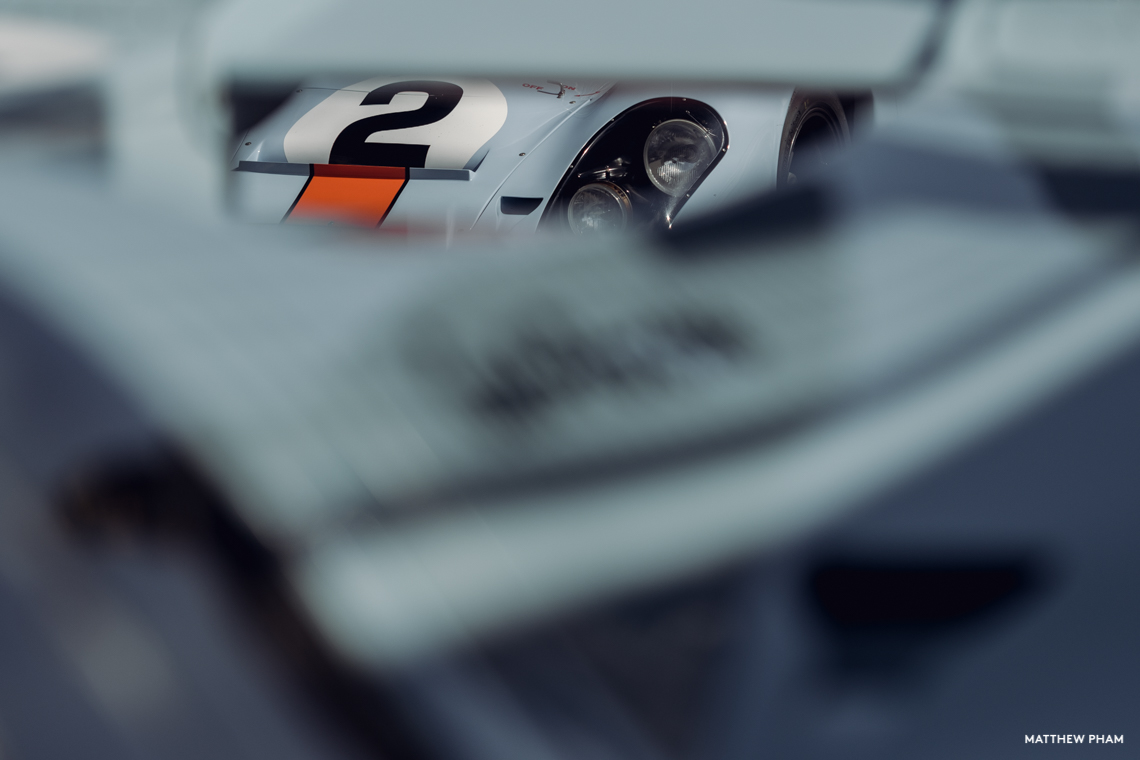 To effort all around boys! Great read.

Piech did not have enough time to build all the cars for homologation. He built a handful and the rest were just static models. The cars were displayed in a small alley so the inspector could not access the cars easily. They can only see the cars on both sides of the row.

I've heard contradicting stories about this – from some accounts the first time the CSI visited only some of the cars were built but the rest were in parts, as Piëch argued why build them only to tear them down again to be customised for each customer? The CSI declined to accept that, so Werk 1 build them all the second time around, and Piëch even offered the CSI drive each one.
The photo below was taken on homologation day – there was certainly room to inspect each car. 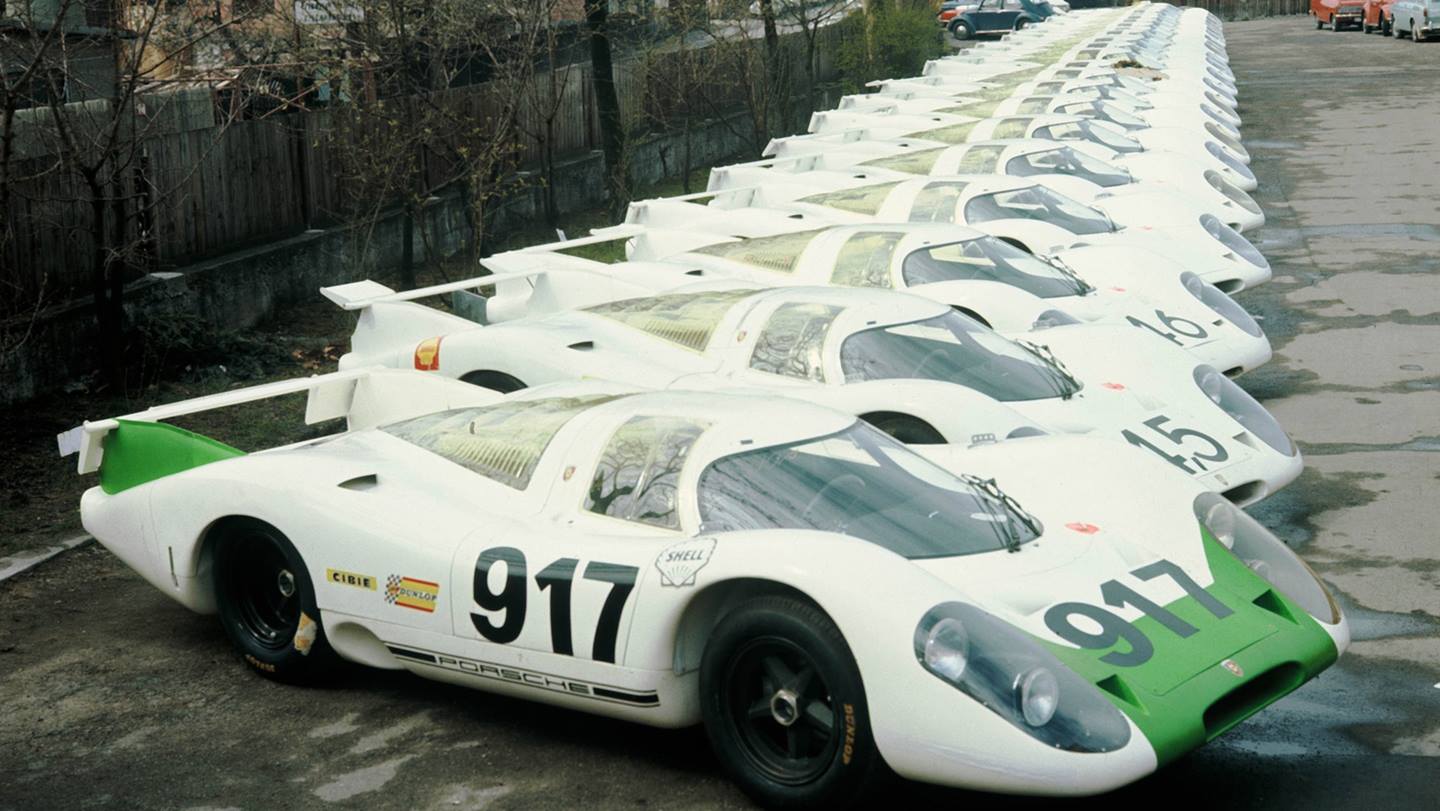 Cars like he Porsche 917 & Mazda 787B make me sad in a way. When you look at the LMP1 cars these days they just don't compare, even with all the new tech breakthroughs.