This time last year I used Toronto’s Motorama Custom Car & Motorsports Expo as a way to express my appreciation for car shows in general.

Coles Notes, I throughly enjoy car shows. Furthermore, car shows that are all encompassing are among my favourite type of show. I thrive on variety and would rather touch on as many genres as possible within a single post rather than work within the confines of just one.

From cars created to attain a near perfect score on a judge’s sheet, to those built to cross the finish line first, Motorama honestly has it all.

This year, my intent was to best last year’s efforts by delving deeper into the show via a series of posts similar to what Dino has been doing for Japan’s 2019 Nostalgic 2 Days coverage.

Unfortunately, exactly a week prior to Motorama a slight trajectory miscalculation aboard my BMX resulted in a completely ruptured left Achilles tendon. I got my first of a series of air casts the day before the show opened and long after I told my five-year-old son I’d be taking him to the show.

Worse still, prior to my tumble, I told a certain outspoken Irish Editor in Chief that I’d have some great Canadian content coming just around the bend.

Not wanting to disappoint my son (who took the three of the four photos immediately above this paragraph) or Paddy – and by extension all of you – I opted to push through my current predicament. Swelling and better judgment be damned.

Two-footed or one, the best place to start at Motorama is Hall One. This main hall is where the showiest of the show cars are housed.

Little expense is spared in building these cars, and from an eye candy standpoint it’s a tough hall to beat.

The fact that many of these cars won’t be driven much more than on and off a trailer may irk some, but I feel they are still worth some level of appreciation. I mean, it’s hard to ignore a Pontiac Acadian that boasts over 2,500 horsepower thanks to a Nelson Racing Engines 632ci big block V8 and mirrored 88mm turbos.

A very slight notch below the Pontiac was a 1972 Chevy Vega known as Vegabond. Like the Acadian, it was a completely transformed pro touring-styled show car.

Chevy 427ci V8 through to the custom interior and widened rear end, there isn’t a single area of the Vega that’s not customized or painstakingly detailed.

As someone who hesitates to buy light coloured wheels due to road grime, I can’t imagine the upkeep required to ensure a polished white undercarriage remains clean, even on a car that’s seldom driven.

Not to devote the opening chapter solely to General Motors products, this 1930 Ford Tudor was not to be ignored. Channeled over a custom frame, with a drastically altered roofline, the 1,500 horsepower V8 looked almost comical with the blower an even height with the roof and the air cleaners towering inches above.

The owner proudly stated this car is destined for much more than racking up awards. Time will tell if that’s true, but I’ve yet to see a completed car from Binbrook Speed and Custom that didn’t get driven.

Following Motorama’s main hall is a motorsports-focused room that showcases all manner of unique race cars. Many of the cars in this hall race in series that have yet to be covered here on Speedhunters in exacting detail.

I’m not sure if there are many super modified, sprint, or lawn mower racing fans among us, but if there are let’s hear from you in the comments section.

Personally I don’t follow any of these series very closely, but I am somewhat up to date on NASCAR. That is to say, I’m slightly aware the criticism surrounding the sport circles around the fact that the cars running laps have very little in common with the names pasted on the side.

The OSCAAR (Ontario Stock Car Association of Asphalt Racers) ‘Hot Rod’ series aims to change all of that, at least at the grassroots level. Like any race series there are a number of vehicle stipulations, but the most interesting is that the body of each car must be a rear-wheel drive North American car produced from 1949 to 1974.

Furthermore, the cars must retain their stock roof and grill, and any replacement panels not only have to resemble the factory pieces they’re replacing but also still be steel in construction.

The result of this unique rule set is a racing series of cars that look absolutely menacing. I hope I’m not the only one that wouldn’t mind seeing this aesthetic reimagined for the street.

Continuing on my rollabout journey through Motorama, the second to last hall I visited was a new addition for 2019.  To many, ‘Motor Mayhem’ was simply the hot rod room, but it wasn’t solely the cars that made this area of the show so special.

The music was loud, the drinks were flowing, and the people – who were as eclectic as the vehicles – really brought this room to life.

There were plenty of recently-built yet traditionally-styled hot rods within the Motor Mayhem room, but the ones that really captivated me were the untouched survivors.

These cars – which ranged from custom hot rods to factory stock C1 Corvettes – have been pulled out of garages and barns all over Ontario and the neighbouring states. The general intent for these cars is to make them drivable again without losing any of their original charm.

After looking each surviving car over I couldn’t help but wonder if 30-plus years from now people will want to preserve the best efforts of 2019?

Spring Is In The Air

Directly beside the Motor Mayhem room was ‘Spring Fever,’ or to many the tuner room. As one transitioned from Motor Mayhem to Spring Fever punk rock gave way to trap beats and American iron was quickly replaced with import metal.

The two rooms were as far apart as they were similar; each one focused on niche tuning styles, but these styles were literally decades apart. As someone who spends a lot of time on both sides of the fence it was an interesting juxtaposition to say the least.

It was pretty awesome to see the more adventurous members of each crowd take a peek over on the other side to see what those ‘old guys,’ or ‘young punks,’ were up to.

I spilled a considerable amount of ink last year expressing my respect for the creativity behind this Jeep. There are as many in-your-face modifications in this project as there are ones that fly completely under the radar. For example, from the factory neither the hood nor the rear doors open the way they do in the photo above.

The reason I have taken a moment to post it again is that for 2019 a 392ci Hemi V8 and 6-speed transmission out of a 2015 Dodge Challenger Scat Pack has made its way into the tucked and shaved engine bay.

Rivaling the crowds the Jeep drew was an equally unique Honda Civic. If you didn’t catch it in the photo above, this EK hatchback has a little secret.

It’s now all-wheel drive thanks to an epic Honda parts bin dive consisting of components from a CRV and Wagovan. To make things even more interesting, the car produces a lot of jam.

Featuring a Dart aluminum B-series block and a Garrett GTX3582R turbocharger, the engine puts down a hair over 890whp at 36 pounds of boost. That’s gobs of power under the hood of an EK.

When asked how it drives, the owner said it’s actually shockingly similar to his Mitsubishi Lancer Evolution IX, just in a smaller package.

I am going light on the details with this car only because I think it’s more deserving of a proper feature. Usually I don’t make assumptions, but I don’t think assuming a few of you will want more details on this car is a bad bet.

In an era full of motor swaps, is there any more universally loved than a Honda B-series in an original Mini?

I have yet to meet a single person this swap offends because it really combines the best of two great manufacturers. The nimble handling capabilities of an original Austin Mini and the reliable power of a Honda are the makings of a winning combination.

There are trade-offs to the swap of course, with the most obvious being a lack of space. In a Civic a B-Series motor is appropriately sized; in a Mini it’s huge. But where there’s a will, there’s always a way.

Even if that way requires jettisoning your front grill to make room in the name of VTEC and boost.

Given my current mobility restrictions, I am sad to say that my coverage from Motorama 2019 more or less comes to an end at this point.

I’ve included a few more photos in a final gallery chapter, including bonus snaps of a what a wheelchair-bound Speedhunter looks like through the eyes of a five-year-old.

Stories from Canada on Speedhunters

Feature on the turbo single cam EF? Lovin It

Do lakesters ever show up at shows like these anymore?

Those OSCARR rides are sick! Can we get a feature on those?

Dave, how many pictures in total did your son took? Kid's got potential. With a bit more practice, he should be able to take quality shots.

At this event he took around 15 or so usable photos that were car related, then lots of random stuff that interested him. I took him to a drift event last year and he took a lot of really cool photos and it was interesting to see his perspective. It's slowly growing from a way to keep him occupied at an event to something he enjoys.

I used to work for someone mentioned in this article. Quit after his lead fabricator and I had a fist fight in a machine shop. Great times.

What a hell of a show, wish there were more like this. Putting this one high on the bucket list!

Oh man I'd love to see a proper feature of the AWD EK Honda CIvic!

It was good to see you and Asher at the show, Dave! Hope your leg heals well and soon.
Always love your reports on the show. We're so busy running around (during) that we miss most of it and you point out neat things that we didn't get a chance to see or time to notice.
Thanks to you and Speedhunters for covering Motorama!

you assumed right, please feature the EK hatch, the Bseries Mini and the Blue BMW

Do you have more pics of the Turbo Regals? If you can’t post them can you email them to me?

These guys, I've got a couple. I'll email you. 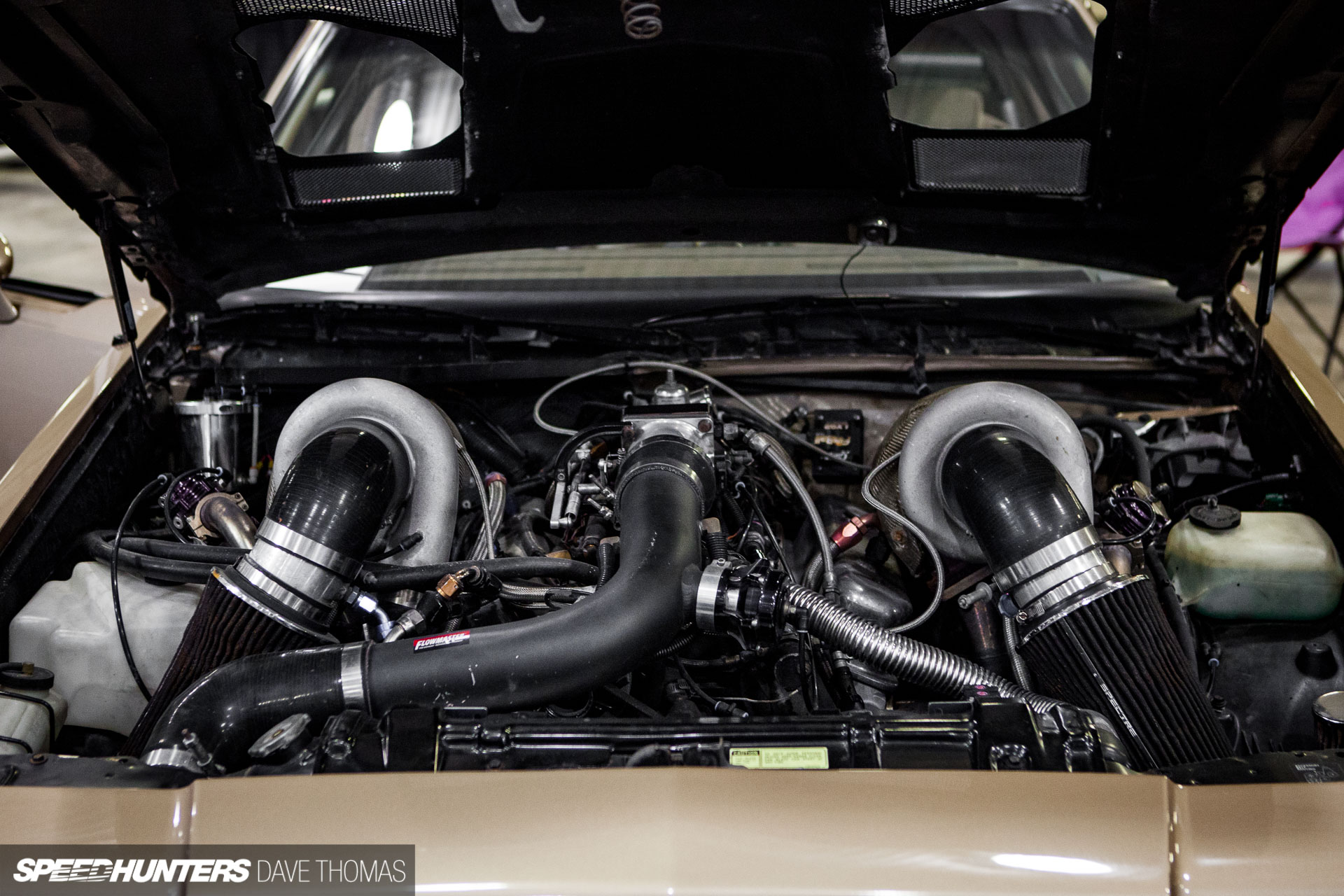