After just 17 years, Rockingham Motor Speedway in Northamptonshire, England is closing its doors.

As sad as this news is, it shouldn’t really come as a surprise to anyone familiar with the venue. When we hear news of any motorsport venue under threat here in the UK, it’s usually a result of noise regulations and complaints from nearby residents.

How someone is able to buy a house near an existing racetrack and then complain about the noise from said racetrack is beyond me, but that’s a different discussion for another day…

Rockingham’s imminent closure, however, isn’t down to this. Perhaps even more unsurprisingly, it’s solely financial.

As of the first day of 2019, Rockingham Motor Speedway is to be repurposed as an automotive logistics space (fleet storage facility to you or I). It’s far more profitable to park cars on the circuit than it is to drive them.

We should be grateful for the time we’ve had, I guess. The very fact that Rockingham exists in the first place bucked the trend for motorsport in the UK. The vast majority of our other circuits are converted airfields, but The Rock was purpose-built upon a former industrial steelworks wasteland. It’s a hugely ambitious and impressive venue, but one that’s seen more use as office and storage space than motorsport over the years.

The circuit comprises of a 2.38km (1.48mi) American-style banked oval and a 3.12km (1.94mi) International Super Sportscar Circuit, and there are 13 track configurations possible in total. The original build cost was some £70,000,000 back in 2001, and I seriously doubt that the venue ever turned a profit, despite changing hands countless times.

The original dream was to host the CART Champ Car World Series, which it did during its first year in 2001. This was probably the one and only time Rockingham came anywhere near its 52,000 capacity; some of the grandstands were only opened once or twice, many of the seats never sat in.

The declining CART series moved to Brand Hatch two years later, at which point Rockingham introduced its own stock-car series, ASCAR. The UK crowds didn’t really take to this either, and just a few years later ASCAR was no more.

Rockingham did manage to attract BTCC to its infield circuit for a number of years, and the facility was still used for testing and film/photography purposes right up to the end.

But perhaps what the majority of UK automotive fans will remember Rockingham for is its eventual accessibility for grassroots motorsport. With so few big-name series showing an interest in hosting events there, Rockingham became a haven for those wanting to host grassroots events for those on a relative budget. With large paddock areas, it became the perfect venue for regular drift days. A flat part of the outer banked circuit was even converted to a Meihan-style track layout on occasion too.

It also became a hit for track day enthusiasts. Rockingham may not have been the most glamorous or exciting circuit that we have on offer, but it was easily one of the most accessible. From a photography point of view, I loved it. At sunset during good weather, with the huge grandstands and banked corners in the background it was like a small pocket of America.

I’ve been here to drive and to shoot, for TV shows and magazine features. I guess I always thought it would be here, so maybe I took it for granted.

One Last Time Around

With my coverage of one of TrackAddict’s open pit lane days last year being so well received, I thought visiting for its last ever track day at Rockingham would be a fitting way to give the circuit a send-off, Speedhunters’ style.

Originally my plan was to briefly stretch Project RS4’s legs around the track, however with a recent diagnosis pointing out that my clutch is on its last legs and needs changing ASAP, I sadly had to sit this one out. Some of the other Speedhunters team members were in attendance, though.

In fact, for a winter event the attendance was much larger than I expected. Apparently during a show of hands during the drivers’ briefing it was clear that most people there on the day had never driven Rockingham before, and seeing the wide and unexpected variety of cars out on the track it seems to me that some people were there to tick the circuit off the list at the last opportunity.

I’d imagine there’s a certain sense of sentimentality involved. If years down the line someone reminisces about the good old glory days at Rockingham, they’ll be able to say “I drove there once”.

Relaxed open pit days such as TrackAddict helped bring Rockingham to life for many of us. Here you had this huge, abandoned and unused shell, and in the middle of it a small group of likeminded people could congregate to enjoy our silly pastime.

Sadly, my visit to TrackAddict’s final fling at Rockingham was fleeting, as I was only able to stay for a couple of hours in the morning. But what I saw couldn’t have gone better. With a huge and eclectic mix of cars lapping time and time again, everyone got their money’s worth.

Regal Autosport’s freshly supercharged Lamborghini Huracán was stretching its legs along the start/finish line straight, the boosted V10 screaming to the tune of 800hp.

Although I’m sure others were having just as much fun with 100hp or less. Shout out to the guy in the 1.25-litre Mk4 Ford Fiesta; it may have four doors, a roof rack and a tow bar, but I’m pretty sure the driver left paint from his wing mirrors on the circuit the way he was cornering.

At one moment Speedhunters’ own Ben had a bit too much fun and may have used a tyre wall to come to a halt. I’m sure it’ll buff out.

Perhaps what’s most enjoyable at open pit days such as this is the relaxed vibe. It’s a classless society, where a cheap hot hatch can mix with an expensive supercar. Jokes and stories are shared back in the paddocks, and friends swap keys (not in a fruit bowl type way) before comparing notes on each other’s cars.

There’s inevitably some who will take it more seriously than others, but it never shows.

As I had to dash early, I left Rockingham one last time with the sounds of TrackAddict reverberating around the empty grandstands. I think I’ll miss this place, but times change and it’s as good excuse as any to experience a different circuit for the next one…

More Stories from the UK on Speedhunters 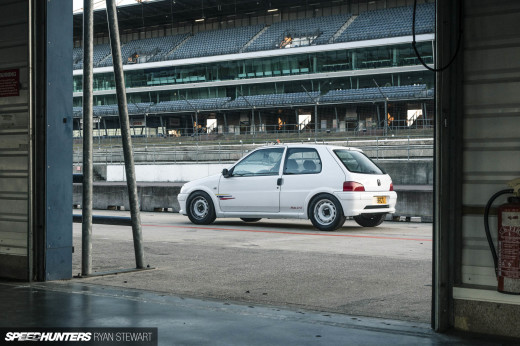 The After Work Drive: Why Simple Cars Are Best

This reminds me of that story wherein Dunsfold Aerodrome, home to TopGear UK, is about to be built up as a residential area. Which is all well and good for all in general, but I really wish the track, the main strip, and the big warehouse studio stayed as a museum of sorts. It was a British institution, after all, and still is. We can wall off the place with soundproofing...

Now I wonder what it would take to graft the whole test track. I bet I can reassemble it somewhere far from homeowners...or potential homeowners.

Ha! I sprint against the guy in the Fiesta with the roof rack, drives the wheels off the thing at every opportunity.

Hi Nick thanks for the kind words! replacing the fiesta with an ST150 powered ford fusion next year along with the racing puma so it was the fiestas last outing. 1 year 10k miles Brands GP, Combe, Rockingham, Blyton, a sprint and 2 autosolo's not only that it was my commuter car this year she has been a little beast!

Thanks dude, its my car. Owned it nearly 11 years.

Yeah its been with me for a while now. Massively underappreciated is true, they're such a well sorted little car.

Great write up Jordan!! Great day had by all its such a shame that we wont be going back there in 2019. There was a strange feeling to the day, everyone was buzzing to be on track but you feel the disappointment about the closure.

Hi Jordan Great article thanks for the shout out (I'm in the red fiesta) alas it was the Rockinghams and the Fiestas swansong as next year brings something new and equally stealthy! Me and my friends wanted to visit the track before it was lost forever and had an amazing day with lots of excellent machinery on display!
Thanks again
Mike Taylor

Is that a super seven?

looks so fun all those machinery playing speed, its just a sad one that a track will close.