So far in our spotlights from SEMA 2018 we’ve showcased a re-imagined Gull Wing Mercedes, a twin-turbo Ferrari powered Mustang, a grape colored BMW E30, a custom Ferrari and an electric RWB Porsche.

Each of these vehicles have been unique in their own right, but so far we’ve neglected one very important aspect of car culture at SEMA: Hot Rods.

As Dino mentioned in the SEMA overview, hot rods are not the main focus here at Speedhunters, but at the same time it’s a genre that absolutely cannot be ignored. The Las Vegas Convention Center was full of exceptional hot rods, including the Cal Auto Creations Model A known as AfterThought.

Afterthought was originally built as a 2017 Ridler Award contender. The Ridler Award is one of the most coveted awards in the entire hot rod community. It can only be won at the Detriot Autorama and to be eligible each car has to be built in secrecy.

Coverage in any sort of media prior to the event disqualifies a car from competition, to my knowledge it’s the only competition with such a stipulation.

When the veil of secrecy is finally lifted, each car must pass through a rigorous scrutinization process to be selected as one of the eight finalists. From there, those finalists, known as the Great 8, go on to compete for the Ridler.

Afterthought isn’t a Ridler winner, but it was a Great 8 finalist. To put things in perspective, this years Battle Of The Builders winner, Detroit Speed’s Camaro Tux was another Great 8 finalist.

I say all this about the Ridler Award to establish the bar in which this car was built to. By any measure this Ford is a beautiful car, and at SEMA 2018 it was the crown jewel of the Mothers booth.

A few eagle eyed readers have picked out minor flaws in some of the cars spotlit from SEMA so far. If looking at things through a half empty glass is your sort of thing, then I challenge you to locate a flaw in Afterthought.

From custom grill to quick-change rear end, every inch of this car has been built with the utmost care.

The work of art between the custom grill, and heavily modified Ford body is an aluminum flathead V8 originally built by H&H flatheads. It’s equipped with Ardun OHV conversion heads,  Stromberg 97 carbs, and a blower. All of which is backed up by a Bowler Transmissions C4 automatic.

Painted in a natural cast color, polished fins appear on the blower, valve covers, block, and basically everywhere on the motor as accents.

Custom machine work carries through into every corner of the vehicle. Brakes, suspension components, everything including various areas of the interior from transmission tunnel to dash.

The center mounted instrument cluster is that of a 1957 Oldsmobile that’s been reworked by Classic Instruments. The cluster introduces white to the color pallet, and the custom wheel and shift knob bring in some wood grain.

This all flows quite well with the distressed brown leather interior, and of course the continued use of polished metal bits.

For the curious, the reason this car is called Afterthought is because it was never intended to be a Ridler competitor. Everything you see today is a result of decisions made after the original vision for the car was conceived.

I could easily continue on about this car but with several more spotlights waiting, it’s best I keep things moving along… 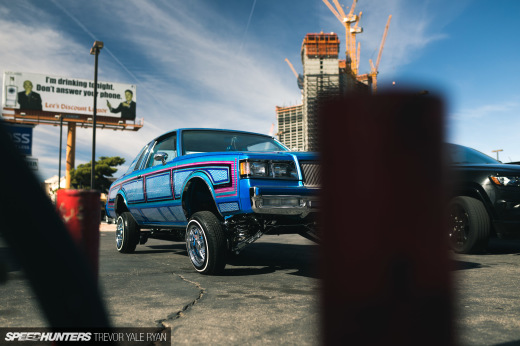 Inside & Outside The Walls of SEMA

I have been in love with this car since the first time I saw it. It looks even better in natural light!

Wowzers. This rod and a couple of the other builds really strike me with their subtle warm / cool color+texture carryovers from the cafe-racer / streetfighter bike world. When I see something like this, I know it's not going to disappoint. The bar was set high 30+ years ago by the Boyd Coddingtons and John Butteras of this world, and they've been amazing us ever since.

I do wonder if rods like this ever turn a tire in anger, but I wouldn't be so disappointed if they didn't.

A lot of the cars built by Troy trepanier end up being driven often, and hard, by their owners...and I’d dare say his shop builds cars at a even higher level than this...!

Thank you for the detail pictures, this car is so well done, even simple things like the motor mounts take so much work to look just right. I love all automotive culture but the history and talent involved in builds like these inspires me the most.

I've always wondered what's up with that style of rear-facing carb inlet. Just looking at it, I would think the air rushing past them at speed would suck air out, not force it in. Is it a form of cowl induction, taking from the turbulent air created by the windshield?

The engine actually sucks the air through the carb so it doesn't really matter which way its facing.
The benifit of that orientation is your less likely to pull debris into the engine.

Yes it does:
Throat Up: needs to be enclosed, since air will create a lot of turbulence when exposed to rushing air
Throat Forward: Will see benefits above 180kmh, but only if designed correctly. Will induce extra drag, and in windy conditions tends to mess with fueling a lot.
Throat Backward: If placed close enough to the windshield will use the pressure buildup because of natural drag of the windshield. Does not induce extra drag but counters it a bit.

You do pull just as much debris in it though, as air on that part of the cab is slow moving, high pressure. And the carbs suck air in, but helping them do so always helps. It's just a matter physics....

Allthough I must add: The benifits with forced induction are minimal though....

I'm sure the SC won't struggle to pull air in, and facing backwards would stop any debris making it's way in by chance!

I was just thinking along the lines of there even being any air for the engine to suck in, with it all going away from the inlet. Maybe I'm just overthinking things, though.

A bonnie, a beauty and a joy.

It's a beauty. I first saw the car in Instagram and I was hoping you guys would spotlight it.

Beautiful car, and i have to say I'm enjoying the variety of cars you've been showing from sema. Between yourselves, bangshift and fuelcurve websites you're bringing the various car cultures together which is great to see. More of the same please

Thanks! At a show like SEMA I find there's so much to enjoy sticking to one genre is simply no fun.

I've got a few more interesting spotlights picked out as well, just pulling a few details together.

Even as an import fan myself, I just love old school muscle like hot rods

From the header, I really thought at first it was a hot rod powered by some DOHC V8, possibly a Coyote or even an older LT5 motor, bc the valve covers looked like something off a DOHC motor or something. Somewhat disappointed it was an old school carb'd v8, but I still seriously appreciate the detail that's been put into the build from end to end.

If it has OHVs, how can it be a flathead? Yes, I get that the block may have been originally designed for flat heads, but if it doesn't have flat heads, then it's not a flathead engine...

It's a conversion. Ford commissioned Ardun to improve the power of their V8/60* truck engines. Uses the flathead block but does convert to OHV with hemispherical combustion chambers. Lots of issues with the early conversions (pushrods were cast steel and too heavy, valve seals came free, wild cams cause lifter bind etc) but many can be solved using Chrysler Hemi components.

Ferguson has basically perfected the conversion but you can still buy legit repo Ardun heads if you've got some deep pockets, last I saw the kit was $14K. Full race specs are @ 800 bhp but you'll mostly see street versions @ 350 bhp. Some vintage racers use them and they're popular with the hot rod crowd, obv. Ironically enough Ford didn't use the heads... they were too wide for the trucks.

Semantics I suppose? Fair point though.

There are no overhead valves, no overhead cam. Think of 8 old Briggs & Stratton cylinders tied together.
I would love to hear this one lit up!
Beautiful build.

Flat head block, ohv conversion heads. I'll update the copy to be a little clearer on that point.

I think we can all agree it looks rather good though.