Some things never die. Some.

It’s been a couple weeks since I strolled around a roped-off Japantown San Jose at Shukai for what appears to be the last time. As such, I wanted to feel this one out and see what other people were talking about after the event, and what the general takeaway was before I collected my thoughts.

While I would normally go straight home, transfer my photos, and lay out a framework for a story the night or day after an event, this particular show wasn’t so cut and dry for me. And while an astonishing number of media were present for what is essentially a community event, I haven’t seen too many touching on the thoughts that have stayed with me for the past two weeks on my travels to Irwindale, Atlanta, and — as I write this — back to Los Angeles.

There were plenty of cool builds I could talk about, but there are a couple more nuanced aspects I’d like to focus on here instead. Car culture around the United States is alive and well, but any event beyond a late-night parking lot meet takes an astronomical amount of behind-the-scenes work to pull together.

If it wasn’t for the hard work of Cary — along with local shop owner My Nguyen from Headliners in Japantown — Shukai would have never happened this year. All the headache didn’t go unnoticed, though, and Cary was actually honored at the event for all of the work he’s done in the background for Bay Area car culture over the years.

Getting one of just a few registered Japantowns in the United States to close down its streets for a few hundred cars to roll in is not a straightforward task. While Japantown SJ and the associated businesses themselves are on board with this event (and judging by the turnout,, why wouldn’t they be?) there are still a lot of hoops to jump through to pull off a show like Shukai. The last person they worked with at the city retired, meaning that Cary had to start from scratch in a sense.

While Cary and My were able to pull it off at the last minute and fill the streets with great builds, all this stress and planning has taken its toll on the duo. To put all this work in with no direct return — besides the obvious philanthropic feel-good glow — “has mentally burnt me out,” Cary said afterward.

Taking time out of his usual busy schedule running a couple businesses along with a few side hustles, not to mention his family (read: twins, age four), the time invested comes with a very real cost.

Couple that with a couple of bigger issues – the first being that Cary is moving back to Hawaii soon, and the second that the big lot at the end of the show is slated to be sold for a construction project – this was probably the last Shukai we’ll all enjoy.

While I might hope it’s a bit like Irwindale’s last FD season (again and again), who is going to step up and continue the tradition of Shukai? It needs to be the right person; someone who embodies the roots of the show and continues delivering the community feel.

The second topic I wanted to briefly touch on is something that will make my life much, much easier at shows like this. It’s a tool that we (photographers, organizers, and attendees alike) could have used a long time ago.

It’s an app called The AutoGround, an ambitious project spearheaded by few local college graduates and students. The team hit me up beforehand and told me they would be piloting the software at Shukai, so I decided to give it a go.

The idea is to essentially catalog every part ever made so that users can create a uniform mod list for their car. From here you can place a generated QR code in your window that anyone (if you allow them) can scan at a show to see the details of how you’ve built your car. Talking to the developers, the app is meant to help event organizers simplify the registration process, vet applicants, and increase the quality and experience of car shows. While it’s still in its infancy, eventually you’ll be able to search and save users, see who has been to what events, what awards they’ve won, and so on. While these are all useful features, we might see this play out in a less altruistic way, especially when it comes to the scoring system.

Different aftermarket parts carry different, pre-assigned weights or ‘points’ in the app, and it seems like it would be really hard for this catalog to remain unbiased and accurate. Beyond potential partnerships with manufacturers which the end user might never see, how does one measure rarity, cost, or quality of a part? Maybe it’s possible to determine these attributes from one exhaust setup to another, for example, but how do you do this with hundreds of thousands of parts and mods? Mods like Matt Reynolds’ homemade exhaust and what he calls his ‘twist throttle,’ a concept he found on a few cars in Japan and mimicked himself.

Also, what if the fab work or execution is just flat out poor or, on the other hand, exceptional? Despite the fact that you can add hardware, aesthetics, performance mods, and so on to your car, no one’s magically invented an algorithm to measure the overall quality or cohesiveness of a build, and I don’t think an app can ever replace that.

It’s the attention to detail, combination of specific chassis-appropriate rare parts, quality of fabrication, and the intangible ‘something’ that elevates certain builds above others. So, although there’s no way to measure the spirit of a car, at least someone is trying to make things more manageable for those who want to organize shows and events, big or small. I can only imagine the tremendous amount or work the team has put into it this project and the number of cataloged parts so far is unfathomable.

Even if it turns into yet another penis-swinging contest, a new way to for a certain crowd to look down on others cars and all the while brag about how much money they’ve thrown at their own, I feel like its useful features will outweigh any adverse side effects. The AutoGround will undoubtedly help car enthusiasts find and plan more events as well as help builders share a standardized mod list.

Phone back in my pocket, the show on the whole was a great time. I saw old friends and made new ones, I got updates on people’s builds (check out how Matt’s Cressida was sitting last year), and as you can see the variety was staggering.

I truly hope it isn’t the last Shukai, but only time will tell.

In The Streets Of Japantown SJ
ADVERTISEMENT 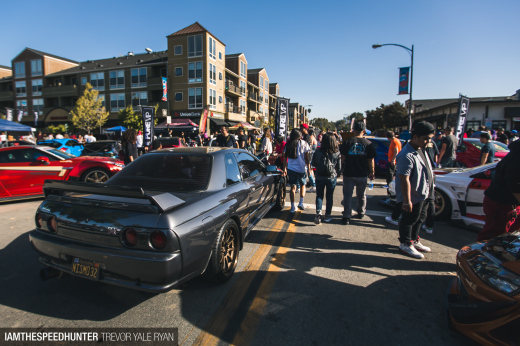 Taking Over Japantown SJ For Shukai

Genuine query: What is the JDM obsession with like, stickers manga girls an stuff? Is there a meaning behind it? Don't get me wrong, I love my JDM cars and won't ever stray (again), but when I see these stickers of birds in their underwear, it makes me cringe.

I know I do it simply because I like anime, it's just a sub culture sort of thing. People who like anime and cars are probably gonna put anime on their cars

Its a sect in the auto world. Not a big thing in Japan. not a lot around then you think . Its more about flare and to stand out than anything.

It's pretty simple, they like it for the aesthetics or cause they like anime. There's nothing really deep to read into

That last shot clinches my need for a lovely restored vintage Mercedes, IN THE WEEDS.

Okay, I can't be the only one curious about the custom white NSX Near the end. I'm almost certain that the body kit is a one-off set. Also, it has a pretty era speciffic look to it. Somewhere between 88-92 and I don't mean the model year.

That thing is just sweet.

Its a '91 with a SUPER rare MSM kit owned by a guy named Les, apparently only two kits in the world, and the other is of course in Japan. My buddy at http://www.fullthrottleco.com is selling the car. You can check out the site for more info and pics, but here is the important info. For the record im NOT trying to promote, just giving the info on the car..

" Wearing the only BSM widebody in the US, this ultra rare import is also sporting a CT Engineering supercharger and tune, custom one-off CT Engineering exhaust, Endless brakes all around, Zeal FX coil-overs, custom audio, and much much more! More details and pics coming soon! Please contact us for more details!"

Yeah it's pretty nuts. Tried to find the owner several times but had no luck.

Well, here's hoping the owner's a SPEEDHUNTERS fan and sees this article. Any spotlights from the show coming?

I've already found a way to get in touch with him after you left that comment haha. Nothing immediately, but expect at least a couple full-length features in the coming months.

That RX8 or green S2k

nice shots
what are those signs under the tire for? always wondered why they there?

They're stands that go underneath the tires on a car that has air suspension where the car is so low that the frame drops underneath the bottom of the wheels.

Anyone else wonder what that red miata would look like with the pop up headlights deleted and just those circular lights in the bumper? Looks cool.

What is that little custom scooter? That thing looks fun as hell. I'd love to have a little side project fixing up one of those.

If you're talking about the blue one, it looks like a stretched honda ruckus... semi-rare and definitely can be a b*tch to find a stock/clean one

@Trevor how bout some Z33 features? Plenty of material there so why not?