What is it exactly about rotary power that makes people so excited?

People who love them, really love them. I’m sure at least a few bar fights have happened over the topic of rotary maintenance, engine swaps, and that sort of thing. They’re a passionate bunch and it’s a topic that I can only begin to fully understand. Just like how the owners of LS swapped RX-7s say you just need to drive their cars, I think to really understand a rotary engine you need to spend quality time with one under your right foot, as well as wrenching on one in your garage.

One way that everyone can relate to any motor is the sound of the thing. With an exhaust note like nothing else, pretty much any rotary power plant is worth a listen to at any RPM.

So, making up for last year where I didn’t do any recording at all, I was fortunate to happen across all four GTP and GTO rotary cars being warmed up at the Mazda booth at the Rolex Monterey Motorsports Reunion.

Starting with the GTO class, this was likely my favorite of these cars out on the track. Actually being, or at least inspired by, the FC RX-7 I really wish there were more GTO-class inspired street builds in the wild today.

I can only imagine the focus required to drive a car like this, especially one with history. With so much racing success under its belt the pressure has to be on at least a little bit.

I initially hoped this car would have been using the 13J power plant, but racing in the ’94 24 Hour wearing this color scheme I second-guessed that it’s been upgraded to an R26B. However, as mentioned out in the comments below, the 13J was indeed retained due to regulations.

It definitely seemed to have a bit of a different buzz, perhaps more of a growl, than the GTP cars. Maybe a different exhaust, or maybe it was my imagination.

Perhaps the most easily recognized to the casual fan, the 767B is always a pleasure to get up close to. Before I really knew anything about cars and before I enjoyed racing like I do now, I knew about the Mazda wearing this livery.

That’s due to the 1991 24 Hours of Le Mans, the first time a Japanese manufacturer took the overall win at the endurance race, doing so in the next generation 787B. The 767B, on the other hand, was out in 1990 with a 20th place finish. Previously enjoying the ’95 winner’s quick blast out on track, this weekend at Laguna Seca was a good one for fans of Le Mans.

Also out on the tarmac was the less celebrated, but equally intense, 787. Wearing number 56, it would be reasonable to conclude that this is the chassis that raced alongside the winning car in 1991.

In a proper run group over the weekend it was fantastic to see, and hear, the R26Bs being revved up and delivering power exactly as they were built to do.

Moving on another year, the other rotary-powered car in the Mazda area of the paddock was this RX-792P. With two built in 1992, these cars didn’t see the success of their older brethren on the track.

Catching fire a few times, before the races even started, the RX-792P marked the end of Mazda’s racing prowess. The following season Mazda pulled out, investing their money in other areas.

This weekend, though, the car won its (shortened) Sunday race and recorded fastest lap in the GTU/GTO and Trans Am class.

Perhaps a shame, but the exclusivity of these rotary-powered racers makes them all the more special and interesting. Any racecar is going to be cool, particularly one from this era. But throw a lightweight, high power, and high-revving rotary into the mix and it’s the stuff of legends.

These cars, and other rotary-based racrs, are consistently out at the historic races in Monterey.

Come for a visit, you won’t regret it.

Stories from Laguna Seca on Speedhunters 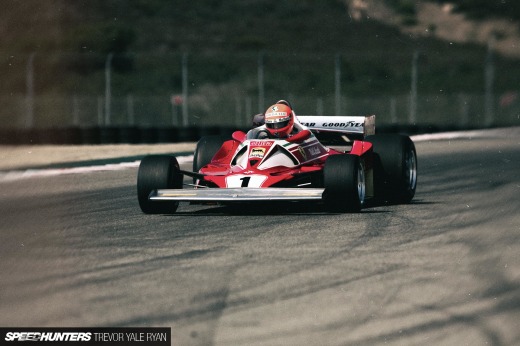 The green and orange one is a 767B, it says so on the front

It was raced the year before the 787B at Le Mans.
The blue and yellow RX-7 did race with a 13J 4-rotor because when rotaries were allowed back at Le Mans the telescoping intakes the R26B had were not allowed.

Oh boy...it's been a long week, thank you! Updated above.

That's a cool note about the '94 RX-7; being that older and quite successful '91 version had a R26B I figured this one must as well; looks like I have some reading to do!

Buddy of mine is a formula mazda champ who has been racing over 50 years now. Guy told me he has never heard of a rotary being unreliable until hearing about car enthusiasts having them. Seems race teams don't necessarily share the sentiment of unreliability. Thought it was an interesting comment.

Most of the bad wrap comes from operator error.

I'd say the unreliable reputation comes from the turbo cars and owners trying to get max power.
People seem to forget/overlook the fact that most of the big race winning rotaries were non-turbo and not the most powerful cars. The biggest turbo win I can think of is a near stock FD in a production car class at the Bathurst 12 Hour. Even the 4 rotor racers weren't as powerful as the V12 and turbo V6 cars they beat. It's irritating when Mazda fans say the rotary was banned from Le Mans because it was too powerful. They just stayed out of the pits longer than the rest.
That said, I don't know what the deal is with RX-8s being unreliable.

To clarify further, in 1991 FIA said new designs had to use a 3.5L engine or you could use your 1990 car. The 3.5L engines were new and weren't proving to be reliable. For LeMans, most teams switched back to their 1990 spec cars. The 26B was reliable and along with being 200kg (441lbs) lighter than the other piston powered cars, it was able to run the long game. It was "banned" in 1992 when the FIA said everyone had to run the 3.5L engines, no question. The 787B only won a single FIA race.

I see what you're saying but a race environment where an engine is required to run for a few hours (or 24 hours) and routinely and extensively maintained is a much different set of circumstances than driving one for a decade or two with countless start-stops in there.

They are an awesome powerplant and do agree that if more owners/enthusiasts were better educated on the rotary engine that we'd see more of them in use and surviving, but, alas...

True. Also note worthy with regards to comments made about the 787b le mans car is that it qualified some 12 seconds slower than the Saubers.

Nice! If you get me a plane ticket I promise I will

Where was my TRIGGER WARNING?
Caution: Eargasms ahead.

Come next time! We've got a couple extra rooms, about 45 minutes away

I dont undestand why people say the turbo rotary engines are unreliable. I still have mine and it ran a good 8 years on the same turboed engine with no issues. Evenutally it just wore out and it blew a apex seal. It was abused and daily driven as well as tracked and autocrossed as well. Most of the issues people have with the rotary engine is lack upkeep of the car. Clean the spark plugs or replace them every 15k. Run lube in your gas and don't expect big power numbers out of the engine without good cooling and good single turbo and proper porting with block upgrades.

Well having owned 5 Mazda rxs over 25 years, I'm well qualified to pass comment. We've had faultless service from them, one and all, anf our fd from 92 is all original, as it left the factory way back then. Can only Sayit as as you find it .... Rotary for life.