It’s strange how you end up hunting speed.

Not long ago, Mark Riccioni and I were planning our travel for a job in Romania where the shoot would finish on a Friday evening. After that, we’d head to the airport, have a beer, maybe some dinner and then fly home. The perfect end to a five-day adventure driving a Dacia around the Romanian mountains. Or so we thought.

A quick look at flight options out of Sibiu International for a post-dinner departure or a potential early morning airport dash, revealed that the people of Sibiu only like flying to London in the evening. 5:40pm was the earliest direct flight back to Luton Airport, which meant that we had a whole day in Romania. This, therefore, presented a few options:

1. After four days with less than four hours sleep each night, we could have got drunk and had a decent lie-in. If the shoot was post-SEMA Show and we were in Las Vegas, then this might have been appealing, but lie-ins are not the most efficient use of time, and we were in a small Romanian town. So, a proper night out was off the cards.

2. A quick Google search showed that Dracula’s Castle was a short drive from our location which was great news, but castles aren’t that relevant to Speedhunters. Besides, by that point I’d have itchy feet and want to check out a new place. Plus, when it comes to work, Mark is happiest when he’s taking photographs or is hardwired to the internet. With no more photographs to take and an internet speed rhyming with stressful, a day doing tourist things with me in Romania was not going to go down well with Mr Riccioni.

3. This led us to option three. A check on the departures from SBZ airport showed that the first flight out of Sibiu was at 6:05am on Saturday, directly to Munich. I love Germany and I’ve always wanted to go to Munich, so this was a result. What’s in Munich you might ask? The BMW Museum. Since Mark owns an E61 M5, I didn’t even need to ask him if he was into this option. There was one challenge, though.

This early Lufthansa flight would see us land into Munich before 7:00am, a whole three hours before the museum officially opened for the day. There’s no such thing as killing time, you’re just wasting it, so after a couple of emails and a phone call, the nice lady at BMW Museum’s press office agreed to open the doors two hours early for us. Good news indeed. In fact, this gave us time to land in Munich, repack our bags after dealing with Lufthansa’s silly carry-on allowance, grab breakfast, and gawp at the fact SIXT will rent you a BMW M2 in Germany. What a wonderful time to be alive in the land of autobahn.

If you want to check the BMW Museum out, then it’s a short taxi ride from Munich Airport, or an exciting road trip from pretty much anywhere. You could easily spend a whole day there. The food is good and the beer is cold, too. Don’t go on a Monday, though, it’s closed.

The home of Bavarian Motor Werks is far better than any lie-in I’ve ever had, and probably more interesting than Dracula’s Castle. A special thanks to the lovely people at BMW for making this visit possible and even for opening the doors to BMW Group Classic for us, but more of that another time.

The following gallery is, as always, best viewed on desktop.

WOW! Thanks for this, some great reference photos there.

I am quite surprised that it seems like there isn't an E39 M5 on display. That car is the epitome, along with the E46 M3, of what a good modern BMW should be. Comfortable enough for daily use, but tight and understated to hide its performance. Speedhunters should feature more of this generation M3/M5, especially the M5, where it's not loved as much on this site.

I totally agree! The original M6 and the E39 M5 are the two best styled road Bimmers.

Such a shame these cars are overshadowed by modern bloated models like the M4 and current M5 and M6.

The opening image says it all, i can stare at this image for days and still feel like a young boy in the candy land. These are dream cars.
Sure it will last for a long time as my desktop background (it was a GT-R 32 for the last 2 years) special thanks for this shot, you made my workplace happy and relaxing again.

Jesus Christ, I think it's my favourite feature ever on Speedhunters! Thank you very much for these amazing shots! When I visited BMW Welt the museum was closed and I nearly cried. Now I know what I missed.

Which means now you could not hold yourself and really started crying.
I feel your sorrows man.

Erm...anyone...I mean this is an EA-affiliated site so I'm sure someone's listening...can you please put the E46 M3 GTR in Real Racing 3 along with the new M8 GTE?

Wait, wait, wait... What's with the black E46 M3 CS(L) badge?!
I've been there 3 years ago and i've got pictures literally from the same angle of the same car (same licence plates, same location) and it says M3 CSL, did someone scrape the "L" and noone noticed? Also, was there ever a CS E46?

To answer your question, BMW did produce and E46 CS. It packed the usual 343hp along with brakes, steering wheel and rack from the CSL model. Very low numbers came here to the UK.

Good spot. People steal things from the museum and the 'L' was a victim of theft. Obviously BMW Welt do their very best to keep on top of things like this, but we were in the museum early in the morning, so this might have happened the day before. I've heard that some museums have issues with visitors dropping coins into engine inlets, so extra care has to be taken of these cars when they are moved. Absolute madness, but alas, that's the world we live in.

Really? People go to museum and try their best to desecrate the exhibit? Unbelievable...

The CS was also known as the Competition Package (ZCP) in the USA and Europe. The "CS" name was used for the UK market.

And I'm pretty sure that black car is not a CSL, reason being all CSLs were only available with SMG II gearbox.

thanks for the info about the CS version, but it is the actuall CSL, the picture after that is the picture of M roadster's interior. Here's my picture taken 3 years ago 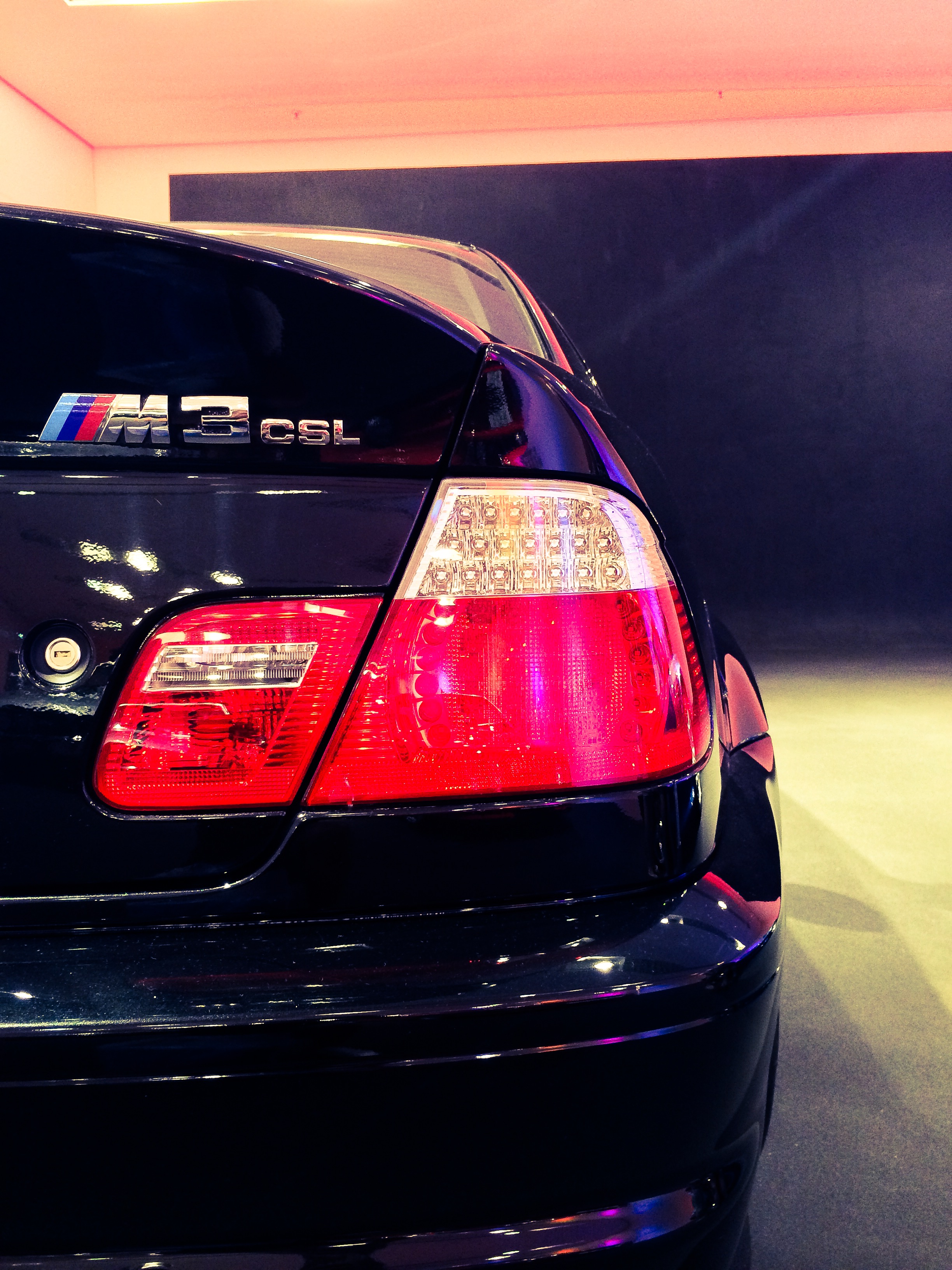 It's 100% an E46 M3 CSL. There's no interior shot posted in this story. Here's some YouTube evidence: https://www.youtube.com/watch?v=ZQHJkkWcXq0

Been there last year, amazing place, I loved the thing from the ceiling that made the shape of their cars.

Finally a place I have been to on Speedhunters! Yes!

Goddamnit, the BMW Museum is beautiful.