Every car in the Speedhunters realm isn’t just a car, it’s a reflection of its owner and creator.

It’s something that we all too often overlook, and something which removes context from a build. Without context, you can never really appreciate a car.

For as long as I’ve been involved in hunting speed, I’ve known Neil Sheehan. We both grew up in the same town, although we never really knew each other until our love for cars and photography introduced us. He’s maybe the most outspoken person I know when it comes to cars, and certainly has an opinion on pretty much every facet of car culture. Nearly all of which, are equal parts accurate and hilarious.

His passion and enthusiasm for cars, the JDM scene in particular, can only be described as infectious. He was the original driving force and creator behind Juicebox, Ireland’s absolute best car culture site. What’s funny is that he didn’t drive or even own a car during Juicebox’s formative years. There’s no judgement on that; I didn’t get my full license until I was 25. Simply, we couldn’t afford to drive here.

Like a lot of people I know, Neil felt the effects of the recession in Ireland hard. It ultimately forced him to emigrate to Canada, where he lived for a few years before – thankfully – returning home. I can’t count the number of friends that are now living overseas, and likely never to return on a permanent basis. I’m glad they’ve found new lives, but they will always be missed.

Upon returning home, Neil had gained a new appreciation for Irish car culture, something he found was missing in Canada, or at least paled in comparison. His energy for Juicebox was revived, and with the help of friends, set about arranging last year’s Juicebox BBQ, which went down a storm. In the year since, he’s got his license and a humble daily driver. However, his dream car – a Toyota AE86 – still evaded him

With AE86 values rising at an alarming rate, it seemed that it might never happen for him. However, over the course of a few weeks, and through some incredible circumstances and luck, he found himself the owner of not one, but two AE86s. Sort of.

The first was actually a two-door AE85 shell, which he recovered from a container with the help of some friends. But it was only a few weeks later, that he was made aware of an AE86 that needed a new home. There was a catch, however.

Video warning: swearing and awful accents are contained within.

The 1987 Trueno GTV – one of the last AE86s made – was exported from Japan into Ireland in around 2005 or 2006, and was used as a competition car in the early days of Irish drifting. It would have come with a naturally aspirated 4A-GE from factory, of course, but at some point during its life in Japan it was re-powered with a supercharged 4A-GZE from a front-wheel drive AE92 Levin or Trueno GT-Z. “Proper ’90s crust” as Neil describes the conversion.

The kouki Trueno was sold on again; the top mount intercooler was replaced with a front mount (the scoop remains) and the car continued to be used in anger. Around this point, the paint started to flake and the lacquer was peeling, so it was taken off the road to be sanded down and resprayed. That never happened.

For quite a few years the Toyota sat in a back garden, slowly being overgrown by nature. Its then owner was obviously aware of this, and when he heard that Neil was looking for an AE86, set about getting in touch with him through his friends. A deal was done, the car was recovered, and its restoration began.

Neil’s original plan was to use this as a parts car for his AE85 shell, but as it was cleaned and examined, he fell in love with the Trueno. It was in surprisingly good shape too, all things considered.

There is some rust and rot to deal with, but nothing that’s insurmountable. With the interior stripped, Neil’s conviction to restore this car was only strengthened.

Okay, it needs to be started with a screwdriver for the time being, but it runs, drives and stops. It’s as good a start as any. There were some pleasant surprises, too.

There’s a 4.778 final drive TRD limited slip differential, TRD shocks, TRD shifter, TRD N2 wing and a TRD bolt-in cage along with a Momo steering wheel. The rear wheels are Southern Ways; the fronts are Volk Racing by RAYS. It also has the “sketchiest” tyres, ever, according to Neil.

On the driver’s side there’s a Bride recliner that has seen better days, but it’s nothing a good upholsterer can’t repair.

Along with the AE92’s 4A-GZE engine and loom swap, came the same AE92 cluster which Neil laughed off as a complete botch job.

As said above, it is running, but does need tidying and further tuning. It’s also running a smaller Cusco supercharger pulley for higher boost, along with what I think is a GReddy front-mount intercooler conversion kit with hard pipes. I’m not sure what Neil’s plan is here, as it’s still early days in the restoration, asides from documenting the build on the Juicebox YouTube channel.

For now, it’s baby steps as the car slowly begins its transformation. Part of me wants to see its patina and neglect retained while turning it into a screaming 16-valve and mechanically-perfect fast road car, but the other part of me wants to see what all the years of ideas that Neil has in his head can do with this car.

Considering it was almost certainly destined for the scrapyard, he can really do no wrong with it. Nothing could be worse than it rotting away in a hedge. Hopefully, this won’t be the last time we see this car on Speedhunters. It’s just up to you, Neil.

Oh, and there’s the small matter of this year’s Juicebox BBQ to attend to.

Leave the exterior like this! With a mechanical overhaul and the junkyard look, this may be one of the biggest bitchslaps to the stance kids in a long time.

The car hasn't been built as a 'bitch slap' to anyone, it's just a guy building the car he's always wanted, for himself.

I like builds like this precisely because the owner isn't trying to bitch slap anybody, or tell anybody to fuck off, or is building in a general troll-like manner.
Dude found the car he wanted, and is building it. boom

Paddy, you also know that its a lie.
My car will never be on the internet, because i built it for myself, and im not interested in other's opinions about it.
For cars presented on this site, it simply cannot be true.

There's so many flaws in that logic, that it's not worth arguing with you.

take care of the rust at least!

The video was everything I love about cars and mates. Stellar. Will follow this!

fire off some youtube channels you enjoy. Most of the ones I find suck, so I'm crowdsourcing lol.

That video just confirmed for me that the Irish are indeed batshit crazy as I suspected, and that I absolutely have to pay them a visit! I'd love to be able to find something this cool out in a field! The best I've done is pull some old spaff mags out of a hedge when I was 11...

Slightly off subject, but any recommendations for big events or anything to make a long weekend out of?

Depends what time of year you want to travel, but Japfest is probably the best and close to Dublin.

Awesome, thank you dude. Keep up the great work!

Lack of car culture in Canada?? SMH
Where did he live while in Canada?

Vancouver, as far as I recall. In his defence, I often find the same when I travel.

I'll let him speak for himself, but I don't believe he meant it with any malice or slight against Canada, it just made him appreciate how good Ireland is, especially for JDM car culture.

Thats bizarre. As someone who lives in Van there is a massive 86 and vintage Toyota community called Dorikaze. Wonder if he missed it or just didnt think it was up to snuff haha. Or perhaps the JDM culture in Ireland is just that good

I could understand east coast lacking JDM, but Vancouver is full of JDM car culture... Nearly all Canadian JDM cars would come through Vancouver. Some incredible builds in western Canada.
Speedhunters needs a Canadian hunter!

Here I am about to defend my native country and there's Richard haha.

Sort it out mechanically.
Drive the shit out of it!

On the screwdriver 'key' note lol my grandfather's 1978 Mitsubishi Colt Galant down here in South Africa(Sigma elsewhere) starts with a tablespoon.

I haven't laughed that hard at a YouTube video before part 2 is even funnier. Subscribed to the channel and eager for more crazy accent car filled videos! Another one saved. Top work.

Love it, I just know this is going to be good. Been a fan of juice box forever! Love the Irish scene! Cannot wait, one day I'll have one of these...

The patina does looks great; I mean the car looks sturdy enough, it's just paint. BUT! A fresh coat of paint would pull the restoration (if only in the minds of some) process so much more into the 'doable' region. Just like finding minimal decay produced some confidence, so might a restored paintjob. idk. maybe i need to be bitchslapped

Awful accents? BEST ACCENTS. They're like British accents except that they're interesting.

I could listen to Irish people talk all day. I was in Northern Ireland (no offense) and Dublin in 2009 and hearing people talk was, by far, my favorite part of the trip.

PADDY! Please tell me that there is some way or some how you could get this thing together with the equally patina'd 911 that's co owned by Bryn Musselwhite and Bruce Holder?

Maybe? There's an ocean between the two cars, which is inconvenient.

Hey Paddy, just wanted to say that I really appreciate your articles. Your battle with disillusionment with the whole tuner scene has really shaped your journalistic style. I find most of your writing to be very relateable and down-to-earth. It's refreshing. Keep up the good work.

I really appreciate that, thank you. 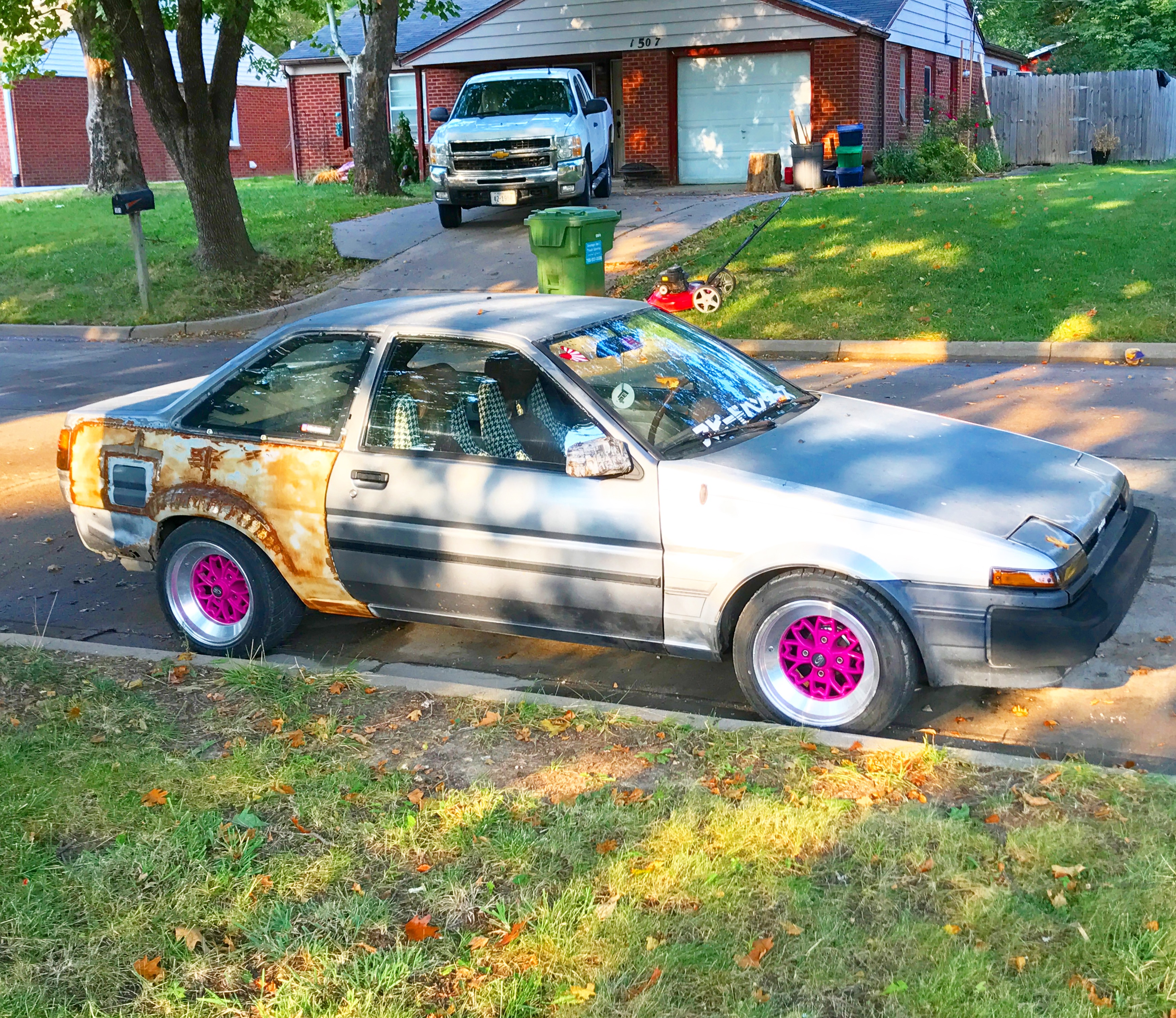 Wait a minute... are those genuine Techno Racing Yayoi wheels?

Matte clearcoat and we're done here. I hope he doesn't plan to paint.

Strange he had trouble finding the culture out in BC, that's the JDM haven in the North. You gotta fight tooth and nail out east here.

I'd like to see the car remain as is in appearance but with a brutally clean and smoothed well presented engine bay with an octopus exhaust manifold and some big trumpets on keihin slide carbs.

Good to see it's getting the love it deserves. Looking forward to the rest of the build. Can't wait to see it at Japfest Ireland this weekend!

Proper piece of shit. So good !!

Why is this even an article? Are you serious?

Speedhunters used to be decent.