It was so easy to miss. In fact, I may have walked past it a few times the morning of Players Classic as it was fully pushed back into its adopted pit for the day. It was only in the afternoon, when it had crept forward a few feet, that I realised its significance.

Before you read on, there’s a caveat to this spotlight: there aren’t any full pictures of the car. Unusual as it might be, due to the positioning of the car, its proximity to others and its dark colour resting half in full sunshine and half in the shade, it made it too difficult to get an unobstructed view. Well, that’s my excuse anyways.

The first detail that caught my attention was the carbon fibre front end, which previously just looked dark in the shade.

Poking my head over the carbon half-bonnet – this was one of two E30s at Players Classic with this unusual feature – I found something instantly recognisable as not being of BMW origin.

A V8 swap isn’t an unusual setup in an E30, but we typically see owners and builders keeping it in the family, so to speak. In this instance it’s a small block Chevy with twin Holset HX35s turbochargers, both equipped with TiAL external wastegates and screamer pipes. The net result of this swap is output figures circa 880hp and 723lb/ft.

Usually, when cars feature horsepower and torque levels of this kind, we would expect to see a stripped, caged and fairly simplistic interior. But not in this case. Here, there’s a pair of Recaro CSs and a full interior re-trim in Ruby Red nappa leather with contrasting black Alcantara. It gets even more interesting when you walk around to the rear of the car and take a look inside the boot…

Ah, that is definitely not typical BMW fare. While the swirl pot and twin Bosch 044s are not all that unusual, the in-board custom cantilever suspension with GAZ coilovers certainly is. This is a car with a lot of surprises as it seems.

The 17×9-inch (front) and 17×10-inch (rear) Hartge three-piece wheels are well suited to the car. When the doors are closed, the boot is latched and the bonnet is down, you would be forgiven for thinking that this is just another nice, simple E30 BMW.

Now, to try and hunt it down for a proper feature. Because who knows what else this car has in store…

Don't be mad, I don't usually do this, but you lost me at 'small block chevy'. And I didn't have to scroll too much farther to reach the comments. I'd like to know more about the suspension though...

Don't forget that on this side of the world, a SBC is a rarity.

I'll see myself out, sorry lol

Your pictures suck.... The only time I see you guys take really good pictures is when you are taking Picts for advertising from places like Replica Wheels AKA Rotiform!!!

Yeah, that's the only time we take good photos. You absolute jackass.

And here I was thinking that Speedhunters was the one outlet which had escaped the fake news conspiracy theorists.

The car is a really cool find regardless though. I definetely want to know more about the inboard suspension.

It's a falling rate suspension, that means it sucks! And it was designed by a complete idiot!

Behave like an adult, or get treated like a child. This is your one and only warning.

You sis not take any pics of the whole car? Really real car people don't care you did. To get to take it out for a one off.

Why don't you take your abundance of free time and take some "better" pics. You know, so the rest of us can make snide comments about your lack of skill and class.

Very interesting car but only these few pics and that's it?
C'mon... we want to see the whole car at least...

(also, going to try find it and feature it.)

Wait isn't this the same E30 Alex from CarThrottle reviewed?

Yup it's the widowmaker

And you must be the guy behind the whole build!

I must say, absolutely stunning. Also, it's a bit different now isn't it? What's with the half-bonnet tho? Very unique!

Yup that's me lol, yeah since we did the vid it's changed quite a lot , it's actually 2 over hauls since we shot that vid idea behind the bonnet was just really to get the heat out of the engine bay , it works what can I say

Whoever designed your suspension need to go back to college. They have no idea what they are doing. Falling rate, inboard rocker? What the hell was the point of that? And no, you don't have an excuse. So don't bother replying.

@joe Bye Felicia. Don't let the door hit you on the way out.

Thanks for you input

He's an engineer. Everything you see in this E30 has been engineered by him to fit. Asking questions but telling him to not reply? What drugs are you on?

Lol is that only half a hood? If so, why bother opening it?

It still covers the business end of the engine

Well, if you need one I guess.....You could easily create a custom preset to take care of and batch edit all of it out but you're the pro here.

that inboard suspension turns me on

Such an awesome car!

Nice, falling rate on the rocker arms. What a joke!

pivot placement should be inboard of the shock mount, so the force is applied in the x vector along the shock, instead of x and y with y increasing as movement increases?

what aspect of the design causes it to be falling rate?

There is a chance that the reason for this set up is that the car has been lowered for the show and would normally sit at a different ride height.

Someone explain the bonnet please! 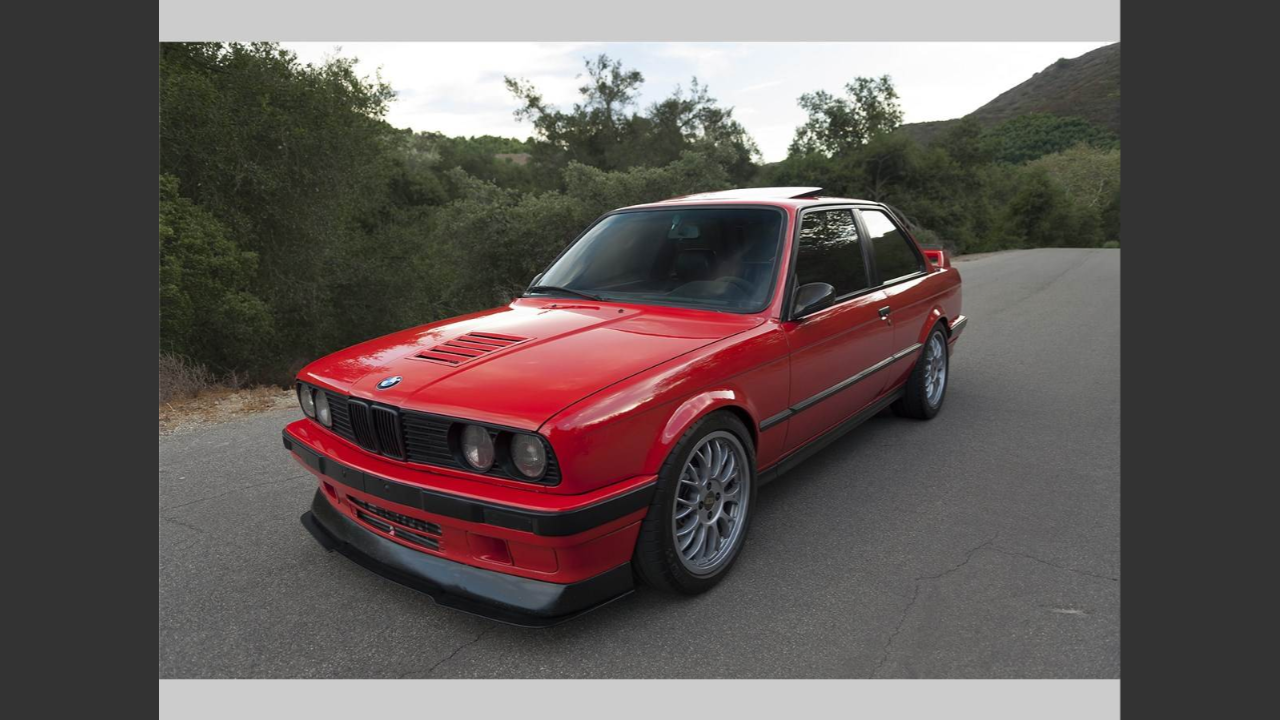 Weird. What would make you think that now is the time to post a "mine is better than yours" comment? Most of us quit doing that when we were in middle school.

I don't know, if a comment could, or could not be modified here after it' been posted, but know all I see is, that Robert wrote he likes his car better. Not that his car is better.

Are you sure you have to insult your readers for nothing? He did not write that the car on your photos is bad, or worse than his. Hi did not criticize your photos or the car, especially did not do it with harsh words, like others (on the other you telling those commenters to behave is something I appreciate).

I was just answering another user's question, but I definitely interpreted his comment different to you. If I'm wrong, I 100% apologise.

Excuse him guys, he's a true bimmer and hates to place any small part in a BMW that is not OEM and we're talking about an non-BMW engine here. Believe me I know this type of guys a lot (Paddy was already aware and mentioned it when writing)

Wow, this post has brought out ALL the trolls!

The build thread for anyone who is interested (I am not the owner by the way)....

This E30 is nice and all, but that E36 is a serious beauty