SHARE A Subaru That You’ve Probably Never Heard Of

Impreza, Legacy, Forester, Alcyone and SVX – if you were asked to name some models from Subaru’s history, there’s a good chance any of those would be the answer. Some may even go further back and recall the 360, or the more quirky-styled Tribeca SUV or R1 and R2 city cars. But there’s a cool little Subaru kei car from the ’90s that really struck a chord with enthusiasts when it was in production. I’m taking about the Vivio RX-R.

This four-wheel drive, 660cc supercharged machine packed a lot of tech and performance in its tiny hatchback package, and the late, great Colin McRae even drove one in the 1993 Safari Rally. When I spotted this track-spec example at the recent idlers Games, I just couldn’t pass up spotlighting it.

I loved how the 13-inch Tom’s Igeta split four-spokes were spaced out to fill up the screwed on fender flares at each corner. And yes, those are 175-section Advan A050s to serve up copious grip.

As is the case with many entry-level grip racers, there’s a big emphasis on weight reduction here with pretty much everything aside from the dash and front door cards having been removed.

I never got to see what was done to the Vivo’s blown four cylinder, but judging by the seriousness of the fuel supply it’s safe to assume that its running significantly more than the 60hp or so the output was capped at to meet kei regulations when new.

This pint-sized Subaru is yet another example of just how many unique and colorful options there are in Japan when you set out to build up a cheap and fun track car.

That is so cool

I thought we were pretty lucky in NZ to have all the Japanese imports on our roads but damn...I was blown away at the variety in Japan. There were subies I'd never heard of gracing Nihon tarseal.

My buddy had a Justy back in highschool. Thing had 3 cylinders and stalled on the Jamestown Bridge (RI) going uphill hahah. We loved it though, and would bullshit online trying to find rally mods for it lol.

Very cool... half expected it to be an inline 3! Just because of the capacity... suppose fours are more Subie's style though?

yeah most would have expected the three cylinder layout

I realized in my childhood browsing and literally sinking in car magazines every single day (my Bible was the annual magazine by Sport Auto from Germany, listing EVERY car with their full details, including JDM models), that the Japanese always keep the cool stuff within their own shores!

Yeah that was the case up until a few years back. Now they keep the shit for themselves and don't sell the good stuff within their own shores. Oh how things have changed (see lack of Skyline coupe in Japan for example)

It used to be that a fair share of the good stuff you could only get *in* Japan.

Dino, are you talking about the V36 Skyline, or the V37/Infiniti Q60? You can't get one in Japan, even as an Infiniti?!

I love the cut out to the Bride to give room for the gear stick, it just shows how small these things are!

I love how the seat has been hacked to clear the shifter. This thing is mad.

I would have one of these over an r34 gtr

We can see many Kei cars in here Japan but, its extremely rare to see kind like this hardcore racing spec upgraded Kei in the streets.
Hope to see like this more.

Does this Vivio remind anybody else of Voltron? Looks like a great replacement if Voltron ever lost a foot!

This thing is very cool, I love the look of it. I wonder if you could fit an EJ207 in there, weight distribution be damned! =D

you could probably cut out the rear floor and mount the ej in the middle haha, seen some crazy drag mira's layed out like that before

Can you imagine the balance and turning radius?! It would almost be able to spin on its axis like a top haha!

....these comments happen when JB speedhunters in the middle of the night at work.

EXACTLY THIS but could you keep the awd? I guess I'm looking for a 22b drivetrain with a chair strapped on. 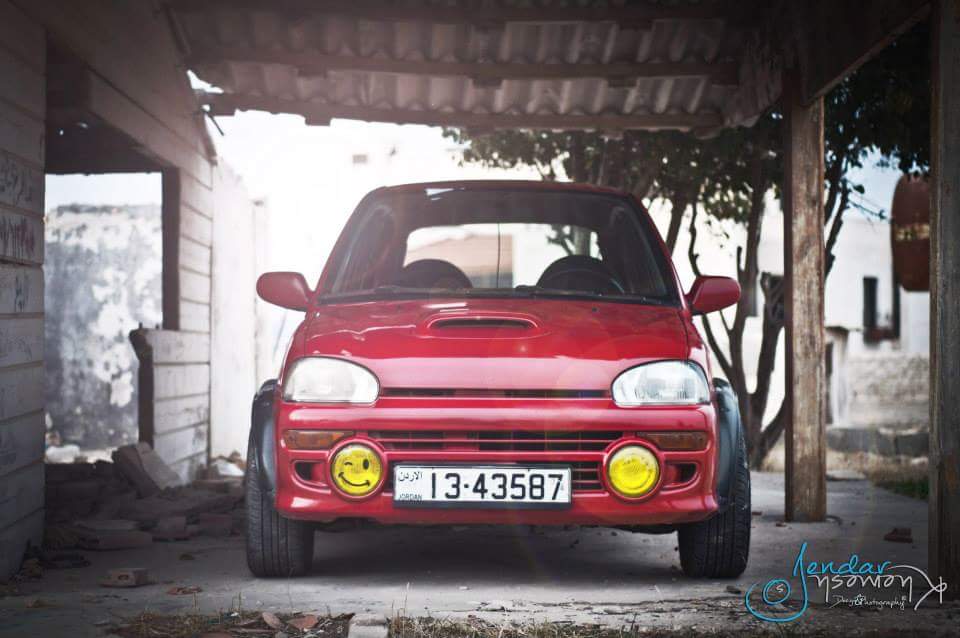 Kei cars are my spirit animal. oh and SUUUUUUBBBBBBAAAAARROOOOOOOOOO