SHARE A Classic Dub Recipe: Clean Enough To Eat Off

You don’t tend to see show cars that are this smooth much anymore.

For as long as people have been modifying Volkswagens they’ve been shaving off badges, lights and trims in an attempt to clean up a car’s lines and make them stand out from the crowd. As with much of the modern Dub scene, this is quite often done in such a way that unless you know what detail was there originally it becomes hard to spot what’s actually been done.

I mean, by looking at the car you can tell something has been modified, but you’re often not sure exactly what.

When I visited Ultimate Dubs last month, one car stood out for me in a sea of newer OEM+ builds. Liam Handley’s 1991 Polo GT Coupe immediately struck me as sticking to a more classic Dub recipe: insanely clean, incredibly smooth, and immaculately well finished.

Shaved and chromed show cars really aren’t my thing, but from the other side of the hall at UD, Liam’s Polo beckoned me to take a closer look.

When Liam bought the car the bodywork already been modified to a reasonable extent. But rather than build on what the previous owner had done, Liam decided to go back to the drawing board and start pretty much from scratch. Replacement standard parts were sourced for everything from the doors to the bumpers to the bonnet and boot lid. In fact, the only exterior modification that remains from the previous owner now is the extended rear arches. The fronts, however, were replaced as they weren’t to Liam’s taste.

With the body parts sourced to turn the car back to standard, Liam set about modifying them all once again. The new metal front arches were extended out to match the rears while almost every exterior badge, detail and trim was smoothed over. Porsche handles were crafted into the doors and blanks were made for some of the banished trims, such as the rear spoiler and door mirrors. Liam also got busy on the plastic bumpers making sure they were equally free of any lines and blemishes.

While this approach might not be to your tastes, you can’t fault the work and dedication it takes to achieve this level of smoothness.

Under the bonnet things are equally as buttery, and the work that’s gone into this aspect of the car makes the exterior overhaul look like a walk in the park. Liam tells me that the engine has been in and out of this car four times, and it’s received four reworks and resprays to get to the stage where he was happy with the result.

The engine bay was initially stripped back to bare metal and the scuttle tray was cut out and re-fabricated to Liam’s design. He originally smoothed and TIG welded all of the original lines in the turrets too, however with the chassis flex, he found that the turrets kept cracking. Eventually he opted to go back to the original design, seams and all. It’s a small compromise, but a sensible one.

With everything else shaved and tucked away from the engine bay, the diminutive but gleaming 1300cc 8-valve motor looks even smaller. It’s packing twin Weber carbs, a Dbilas inlet manifold and a full stainless exhaust though, so it has a characteristic bark to it.

The Polo’s interior is nothing short of exquisite in finish and detail, and it’s all the handiwork of Liam’s brother. Once again, Liam knew exactly what he wanted for the interior. Not happy with the facelift Mk2 dash, he even went as far as to purchase a complete Polo Mk2 ‘breadvan’ just for the early brown dashboard, carpet and trims.

Liam and his brother made custom panels to cover every patch of bare metal in the stripped interior too. These, along with the entirely of the interior, rollcage and all, were retrimmed in suede and leather.

Recaro geeks amongst you will have already spotted the seats – a pair of pretty rare ‘fishnet’ models.

To bring the Polo down over the immaculate BBS RS wheels, custom Mk1 Golf front struts and hubs were used alongside Firestone airbags and Air Lift Performance V2 management. It took a whole host of other steering, chassis and suspension tweaks to get the car sitting and handling how Liam liked too.

I’m a car guy through and through, but in all honestly, cars like Liam’s are usually so far outside of the scope of automobiles that I enjoy that they don’t often hold my attention for long. However, after spending a good amount of time actually appreciating the work that’s gone in here I can fully understand why some people enjoy this aspect of car culture so much. 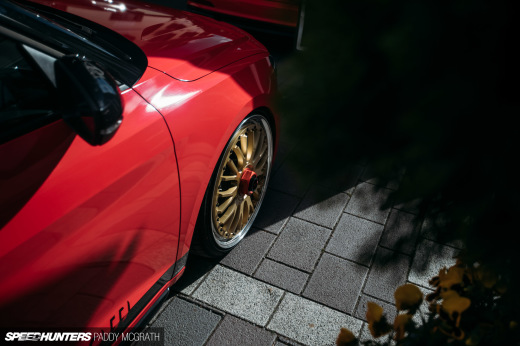 The Wheels of Wörthersee

Not usually my thing, but appreciate the hard work that's gone into it!

The only thing that gets me, is all that time spent, but then the way the front bumper meets the flared arches and the rear bumper just don't sit right, and a cage / that shifter in a show car.

But it got my attention, so I guess it's done the show car job!

I don't know why... but I really like how that looks. Overall i'd say it's nothing special but there is something about it that I love!

Pulling off that look where there doesn't first appear to be much done, is an art in itself. Superb build.

I think what I like most is that I thought this 'euro' style dies off a bit in the '00s. I'm glad to see it make a return!

Usually i dont care for show cars, or vag. But this thing??? This thing is awesome

Same here – I can really appreciate the effort.

Is it weird that I don't necessarily like VW's, but I love what their owners do to them?

Not at all man – the VW scene has some very strong aftermarket identity traits.

And the award for the worlds most unnecessary roll cage goes too.......

An interesting choice to modify. Most people would go with an easier project like a golf or beetle; more parts, I'm willing to bet. But I can always get behind a clean car.

For such an immaculate car I cannot explain infuriated I am about the BBS logo on the steering wheel not sitting right.