When I picked up my 1987 Toyota Land Cruiser project it came with eight lug wheels and 37-inch military tires. While it’s a cheap way to run 37s on your off-road rig, the truck sat too high and to get the suspension articulating the way I wanted the big 37s would have hit the sheetmetal.

I needed to come up with another plan.

The eight-lug wheels made sense for the rear axle as it’s a Chevy 14-bolt from a one-ton truck; inexpensive and indestructible.

To make the front axle have eight lugs, the previous owner had installed these horrible wheel adapters. I never felt safe on them.

When I first went through the FJ to make sure it was roadworthy, I found all these studs and bolts stripped and stuck. I replaced them and, as you can see, added a liberal coating of anti-seize. They came right off after that.

At last, the front axle was back to six Toyota wheel studs, just like it was meant to be.

The rear axle wouldn’t be so simple, but it would be well worth the effort to convert to six lugs.

For one thing, I could shed 50 pounds off each side by removing the massive drum brakes, and also narrow the axle by a couple inches to bring it closer to the track width of my FJ62 front axle.

I would be installing forged six-lug hubs, so I began pounding out the wheel bearing races from the old ones.

Unfortunately, I found rust on the bearings and races, undoubtedly from sitting for a period of time before the massive axle was transferred underneath my FJ6o. Off to the parts store I went, to acquire a new set of races and wheel bearings. Do it once, do it right.

Things were just beginning to get interesting though, because the next step would involve a decent amount of machining to get six lugs to live where eight were intended.

The new forged hub had a smaller outside diameter than the stock one, so the full-floater axle flanges needed to be turned down to match the OD.

Fortunately, my friend has a water-jet cutter in his shop too, so we simply water-jetted the flange gaskets to the same size.

Next I turned (pun intended) my attention to the brake rotors. While sourced from the front of a half-ton Chevy truck with corresponding six-lug pattern, the inside bore would not fit over the conversion hub. A little quality time on the lathe sorted that right out.

Back in my home shop I installed the wheel bearing seals and pressed in fresh wheel studs.

A 14-bolt uses its own gear oil supply to lubricate the wheel bearings instead of wheel bearing grease, but installing brand new bearings bone dry just didn’t feel right for me. I reached for the turkey baster and a bottle of Torco SGO Synthetic Gear Oil to give them a head start.

At last I could bolt the new assembly up!

But I instantly discovered the next hurdle in this project: the factory bolts were too big.

After some calling around I found these smaller 12-point flange bolts.

A fresh coat of paint and the calipers were ready to fit.

Of course, I had to weigh the incoming and outgoing brakes, just to see.

Just over 50 pounds per side were shed. Notice I was even missing the wheel bearing and studs when I piled all this junk on the scale!

To tell the truth, when I started this project I planned on using 17-inch factory steelies from an FJ Cruiser. However, I quickly realized that using the bigger Chevy parts resulted in both hubs and wheel studs that would never fit those wheels. Some quick measuring confirmed it.

With the 2016 SEMA Show deadline looming, it was time to find a wheel that would fit, not just physically but also aesthetically.

Using modern aluminum wheels on a vintage truck is a tricky endeavor; things can go stylistically sideways in no time. However, when I found the Fuel Vector in matte black I knew I was on to something. The styling is pretty traditional, and the face has a nice concave for an aggressive look. The protective ring around the lip isn’t a bead-lock, but it does offer additional protection for the bead of the tire.

I performed a quick poll amongst some of my most trusted car friends, and we all concluded that the Vector would look great.

Fortunately, Fuel even has a distribution center in my city! That’s music to your ears when you’re completely stressed out about getting a build on the trailer in time to go to SEMA. I was expecting the UPS truck to show up, but instead a white cargo van stuffed with Fuel Off-Road wheels pulled up instead.

I couldn’t get the Vectors out of the box fast enough, then bolted up a front wheel to confirm brake caliper and tie rod clearance. While this is a cast wheel, it’s got so much material that I don’t think strength will be an issue. Plus Fuel says its wheel designs are fatigue and impact tested, dye penetrating crack inspected, high speed dynamic durability tested to 200+mph and undergo an x-ray and shearography non-destructive analysis. That’s a lot more reassurance than I bet you’ll get from most cast wheel manufacturers.

This photo of the rear wheel fitting was taken a few days later though. Despite all my planning, I still didn’t have a rear wheel that would fit over the monstrous forged hubs on the 14-bolt rear axle. Suffice it to say, a trip to the machine shop was necessary to open up the bores on the rear wheels.

I went ahead and had the fifth spare wheel machined as well, just to be sure it would fit in any position on the Trailhunter.

I left the center bore alone on the two front wheels, with the idea being that a hub-centric wheel will always ride best, especially on the front axle.

For tires I went with Nitto’s new Ridge Grappler, and lastly I sourced some black lug nuts that were a little smaller than what I had before, to allow a socket to fit easily into the recessed lug holes.

In the end, I’m very pleased with the look. As I mentioned, new aluminum wheels can be hard to pull off on an older truck, but the Fuel Vectors fit the bill pretty nicely, plus now I have rear disc brakes, new wheel bearings and tyres that won’t tear up the body when I flex this rig out on the trail. 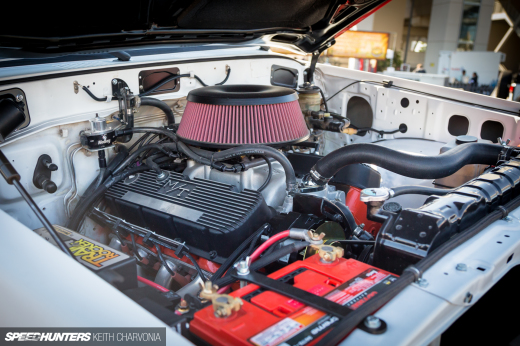 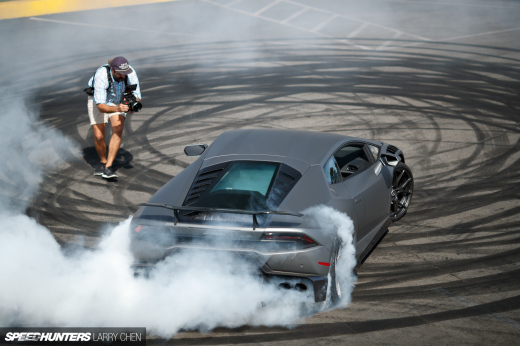 The Making Of Huracán Drift 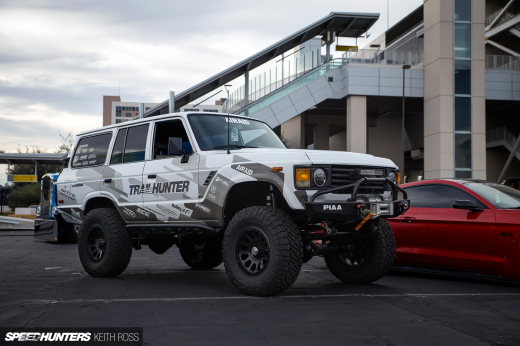 Blazing A Trail To SEMA

I love this thing! Still in for some 'Trailhunter' stickers for those of us with offroad vehicles!

I would love to put a Trail Hunter decal on my Expedition EL!

Wow, that was allot of work, definitely not bolt on.
Great job though, that must have been so satisfying to get rid of that old rusty heavy stuff.
Fake bead locks are a bit of a pet peeve but those wheels look alright.

I agree with you on fakelocks, but these do add some tire protection so I'm good with it. The wheel lip is very thick and protrudes past the tire bead. I've seen some fakelocks that are super thin and cheesy, these aren't those.

I love how this build is coming along. If I end up with my own 4x4 it'll need some very similar livery!

Thanks Matthew, we have Andy Blackmore to thank for the livery.

Looks awesome with the new wheels and I bet it drives a lot better with all that weight removed and new brakes.
+1 for Trailhunter stickers!

Hey thanks! I can feel a difference with all that weight removed.

Now I'm battling soft brakes. I think the larger rear calipers need more volume from the master cylinder, so I swapped in a larger bore FJ80 master and a Chasebays rear proportioning valve so I can set the bias. Can't wait to test it out!

Got to make do with what you have...it's impossible to find one of these trucks in Canada that isn't rusting in half. I'm jealous no matter what axle it has

never use any kind of lube on the wheelbolts. messes with the torque when mounting the bolts.

Are you speaking of the wheel studs? I would have to disagree, it's common to use anti-seize to keep lug nuts from getting stuck. In regards to achieving an accurate torque spec, ARP recommends lubricant on their bolts for a MORE accurate torque. Lots of good info on their FAQ: http://arp-bolts.com/p/FAQ.php

I'm not really an off-road guy, but man, this thing is awesome. I love how it looks.
I've actually got an All-trac Previa that I'm doing some small mods to so it can be my 'mini-overlander' vehicle. It would be awesome if you guys did some 'Trailhunter' stickers. It would work out for my other hobby too, mountain biking.

Funny how I was just thinking about Project Trailhunter when I woke up this morning, and well what do you know an update shows up. Nice!

Awesome i just love the old 4x4, i'm looking to do a cummins swap in a cruiser, i really dig the diesel overlander kind of stuff. BTW it will be really cool to have some Trailhunter stickers.. oh.. and, what are the future plans for Trailhunter?

Future plans are to finally start wheeling it! I'm moving to North Carolina soon, and looking forward to wheeling and camping at Uwharrie.

Will you need to machine rotors every time you need a replacement or is their a off the shelf option for you?

What offset wheels did you use?