Most of the auto shows I’ve attended in the past have had specific display halls just for aftermarket and performance brands, but one thing I like about the Geneva International Motor Show is that everyone shares the same space.

Whether it’s Liberty Walk directly across the from Infiniti or ABT right next to Porsche, it’s cool to see enthusiast vehicles displayed besides econoboxes and luxury cars. I love that it forces you to check out what the entire show has to offer, even if you’re just passing by.

Before I get into my Geneva show experience, I wanted to touch on a few more cars that stood out to me, the first being the Toyota Yaris GRMN.

While the little three-door hatchback resembles a normal Yaris with a few visual exterior upgrades, it’s in fact so much more than that. GRMN is an acronym for ‘Gazoo Racing, Masters of Nürburgring’ after all.

Although they share little in common, the Yaris GRMN is inspired and influenced by Toyota Gazoo Racing’s brand new WRC car – a rally machine that’s achieved so much already in its first season of competition.

For starters, the Yaris street car is fitted with a big brake kit and a set of 17-inch BBS wheels – components that set the tone for what this hot hatch is all about.

It’s definitely not just for looks either; the 1.8-liter inline-four under the hood is supercharged and outputs 210hp – a surefire recipe for loads of fun in such a lightweight chassis. To make the most of the engine setup, power is transfered through the front wheels via a 6-speed transmission and a torsen limited slip differential.

The Yaris GRMN’s interior is nicely specced with heavily bolstered sports bucket seats, special gauges, and a similar steering wheel to that found in the Toyota 86.

I really like what Toyota has done to give the little Yaris some high performance attitude, but unfortunately there are no plans for this special edition model to go on sale in North America. Boo!

While I was at the Toyota booth I also had a chance to check out the Hilux Dakar Rally truck.

I’ve yet had an opportunity to cover the epic Dakar Rally, but hopefully one year I’ll get to cross it off my bucket list.

I just can’t imagine driving something this expensive, but it’s not a big deal for our favorite Japanese Italian (aka Dino) seeing as he’s good friends with Mr. Pagani.

The attention to detail is mind-blowing, and while it’s a bit flashy for my taste, I can appreciate the craftsmanship.

In my first post from Geneva, you might remember that I stopped by ABT to check out its R8 on display. While that was very cool, this Audi RS6+ is something I could see myself driving on a daily basis.

Along with the exhaust tip shrouds, the front lip, rear skirt and side skirts are all carbon fiber.

ABT also fitted height-adjustable suspension and refreshed the interior.

To finish it off, a set of ABT Sport 22-inch wheels are fitted with 295-wide tires at all four corners.

Next up, I stopped at Brabus, but it wasn’t the new stuff that caught my eye first. It was the selection of classic Mercedes-Benz vehicles, all of which had been painstakingly restored to better-than-new condition.

As Brabus puts it, these are zero kilometer restorations. They even have warranties like new vehicles; two years, unlimited miles.

All of the cars are restored in-house at Brabus in a division called Brabus Classic. It’s great to be able to see what this Gull Wing would have looked like when it was brand new all those years ago.

Each restoration is tailored for the type of car, which means the man-hours put into each one ranges from 1500 to over 4000 hours.

Now that’s an engine bay you could eat off! I am a lover of all cars, and it’s really cool to see what Brabus is doing with older vehicles.

As for new models though, one that stood out to me was the Brabus 550 Adventure 4×4².

The interior is refinished with combination of Mastik leather and Alcantara.

Aside from the winch mounted on the front, the 550 Adventure 4×4² also has underbody armor in all the right places, as well as front and rear bumper guards ready to hit up some serious trails.

It even has adjustable suspension for rock or mall crawling.

I love the way G-wagens look with the spare tire exposed, and this one is no exception with a swing arm mechanism due to the larger wheel and tire size.

Infiniti’s Project Black S is based on the Q60 sports coupe and was developed in collaboration with Renault’s F1 division.

Just like in Formula 1 cars, the Black S has an energy recovery system that takes kinetic energy from braking as well as heat from exhaust gases, and stores it in lithium-ion batteries. That in turn eliminates turbo lag which boosts the output of the twin-turbo 3.0-liter V6 by as much as 25 percent.

From this angle it almost looks as if there were some styling cues borrowed from the GT-R.

While this is just a concept car, I’m sure you’ll all agree that it would be awesome to see something like this on the road.

We rarely see any Land Rover Defenders in North America, so even stock ones are special to us.

This ‘The End Edition’ from Kahn Design pays homage to the Defender and is just one of 25 built.

This truck looked fantastic and it really stood out on the show floor.

My last stop for the day was the Koenigsegg booth. This company is single-handedly changing up the hypercar game.

If the green carbon fiber was not impressive enough, the Regera is powered by a 5.0-liter twin-turbo V8 and an electric motor for a combined output of 1500hp and 2000Nm of torque.

Parked next to the green monster was the Agera RS Gryphon, which boasts over 1 million dollars worth of gold accents.

Perhaps the ultimate accessory is the matching helmet, for those times when you need to scare the crap out of someone on the race track.

As I mentioned in my last post, it’s really great to see carmakers like Koenigsegg pushing the hypercar envelope.

While I may never even drive one of these beasts, it’s awesome to know what is possible, because not so long ago it was considered crazy that the Dodge Viper was packing 400hp, and now your everyday family sedan could very well have that kind of power.

Things in the automotive world are changing so quickly it’s almost hard to keep up. 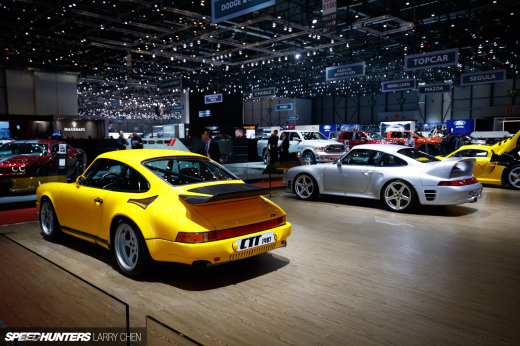 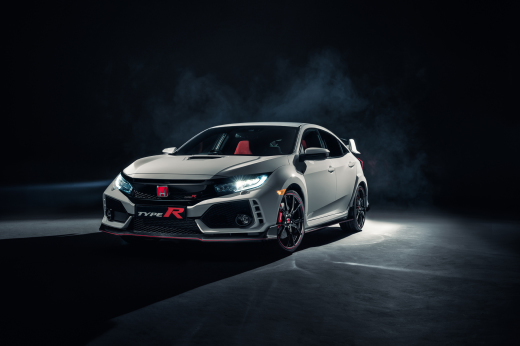 The New Civic Type R: Too Much? Or Just Right?

Bloody hell those brabus classics are insanely good looking.....And that Green Koenigsegg well Mental is all that comes to mind.

Yeah. Pity how they can't see that their current lineup won't stand the test of time so well. Just look at that G...

"North America" means USA, and USA only likes safety that takes the form of draping body panels on a giant, ugly, "utility" vehicles. That's why we don't get hot hatches. It's because people would rather buy an Inifity SUV convertible, or a Subaru Denali - I mean Forester. We didn't get the vw scirocco a few years back for similar reasons; we've already got the gti, so if it's not giant and "safe" it won't sell here. Boo is right!

Im not sure what you mean by ""North American" means USA." As It also includes Mexico and Canada but maybe you just meant that what The USA gets the rest of NA gets so USA dictates what the rest of NA gets? Anyway I agree that its sad we don't get more small cars over here.

I know some basic geography, yes. I do mean exactly what you said though ,lol.

BUT, now that trump is president he is kind of bringing us back to the 50's a little bit. and that might bring us some gas guzzling anti-eco cars. Which will be great for us not so much for the environment. I think that Trump is gonna fix the whole SUV problem. I completely agree with you though.

Please don't use the T word on Speedhunters. lol.

Also, Pagani and Koenigsegg just make some cool s**t. You're right, the attention to detail on any Pagani is very impressive. On another note, I was fully expecting the Brabus classics to have giant motors shoehorned in plus God knows what other goodies, lol.

The Infiniti and the Brabus cars were amazing, love it

'I just can’t imagine driving something this expensive, but it’s not a big deal for our favorite Japanese Italian (aka Dino) seeing as he’s good friends with Mr. Pagani.'

So Dino, do you have an appointment yet? Koenigsegg is instantly a must read. I mean, the cars are simply amazing.

Working on it! That Huayra Roadster needs a closer look...

How close are we talking here?

so much want for the RS6+
and same here John Best, love those mercs but was expecting a 6.3 V8 or a bi-turbo V12 hiding in the gullwing.

No pictures of the British Racing Green Carbon Noble M600 :(((((

It must have been mobbed when I went by it.

In the US, we call everything that is body on chassis a truck.

Yeah. I know alot of people who call anything bigger than a car (including small crossovers) trucks....it's kind of annoying. Not sure if it's people trying to convince themselves that they drive something bigger and more capable than they really do. My Co-Worker just got a Chevy Trax....and she calls it a Truck...

I've noticed the Regera's hood emblem is kinda opened on the penultimate picture.
Does anyone know why exactly? Parking camera? Telemetry camera like on a 488? Not camera at all?

When you say direct drive, I assume that you mean the V8 as well as the electric? And that means that there is only one gear? 1:1? So that would max out at the 250kph depending on wheels?
I think I've missed something...

Yes it's direct drive. Crazy tech, yet quite simple in principle

Nissan/Infiniti have finally managed to make some of their cars look exciting again. That new 3L V6 twin turbo was a move in the right direction. Now to see if any of this comes to market. Still no Silvia though...

To me (who owns an S14 and LOVES it completely), it appears that the Z/G/Q platforms are the direction Nissan Sport Coupe development will be going with moving forward. It's (they are) definitely a great chassis with a very wide assortment of engine and transmissions options... but unfortunately it's looking like the future of the Nissan Silvia is headed the way of the 510 Bluebird. And while yes, that is a sad fact... that's just how progressive, yet cost effective automotive engineering goes. I LOVE my S14 though... so thank you for the light weight, sporty good times Nissan.

The 86 does not have a competitor from Nissan, which sucks. I hope they fix that soon.

They might be a hyper cars. But i prefer Mega cars since they got a megawatt+ Many hyper cars out there. Not quite so many Mega cars.

That first Yaris photo....The car looks SO angry. Kind of want one now...

Not sure how I feel about the 22-inch wheels on the RS6, but you can't argue with the 199mph top speed! Other than the fact that it's not 200mph. Ha. The Brabus Classics are proper lottery winning dream fodder. Did you have your step counter on, Larry?