It’s not all that common for people to associate cars with specific geographical locations, but for me, there’s one model that always pops into my mind when the city of Miami is mentioned. I’m taking about the Porsche 911.

I’m not entirely sure why that is, but there’s a pretty good chance it has something to do with the 1980s TV series Miami Vice, the epic 1990s movie Bad Boys, and more recently CSI: Miami. For whatever reason though, television series and movies set in the Sunshine State always tend to feature Porsches in them.

Neil, the owner of this 1996 Porsche 993, is based out of Miami, Florida too, and during our recent trip to the city for the Race of Champions, an opportunity arose to check out his car and shoot a few photos.

It was back in ’96 that Neil saw a black, narrow-body 993 for the first time, and after falling in love with its svelte lines, he made a promise to himself that he’d own one in the future.

In 2009, the time came, but it took another 12 months of scouring the classifieds to find exactly what he was looking for. Ultimately, it was Rennlist that turned up this pristine, enthusiast-owned example.

It was everything Neil wanted in a 933, right down to the original Polar Silver paint.

Not long after taking ownership of the Porsche, Neil had the entire car’s mechanicals totally overhauled – the engine, transmission, suspension, and even the wiring. When he was done, he essentially had a brand new car.

Initially, Rotiform‘s Brian Henderson rebuilt a set of vintage BBS E26 wheels for the 933, but after running those for a while Neil decided that the old, original magnesium centers probably shouldn’t be pushed too hard.

We all know that wheels can make or break a build, so Neil thought long and hard about what he’d replace the BBSs with. In the end, custom-built Rotiform FUCs – 18×9-inch front and 18×11-inch rear – found their way onto the car, adding some retro flavor to the Porsche.

Neil daily drives his 993, so getting the right feel in the suspension department meant a lot for him when shopping around for parts.

He opted for Bilstein’s B16 BSS9 coilovers with TRG adjustable end links and Walrod bushings to aid in the car’s handling on the street and at the occasional track day.

To add a little more visual aggression, the 993’s been updated to a European-spec Turbo front end and headlights.

Out back, the body has been left untouched, and for good reason: it’s perfect. A Fister Stage 3 exhaust was added, but it retains the OEM tips for a stealth look.

Combined, the ride height and wheel and tire package gives this Porsche a subtly aggressive stance. The look is simple, but it works so well.

Neil’s 911 might not be the most extreme thing you’ve ever seen on Speedhunters, but it definitely fits the daily driven theme. Subtly is key.

And continuing with that ethos, the interior remains understated, the only change being the swap to an Atiwe 340mm Alcantara airbag steering wheel. Those front seats are rare hardback sports recliners.

Perfection comes in many forms, and for Neil, the way his 993 looks now ticks every box, hence having no crazy plans for the future.

The ultimate Porsche for cruising Miami? This one has to be right up there!

I love the new rims, they fit perfectly with the body style.

Oh my God that is gorgeous!

Since there's tons of over-fendered 993s' out there, it's really great to see one still keeping the original body lines.
SIMPLE IS BEAUTY.

this is now the third article by a third author (Mike, Dino, now Larry) where the word "subtly" has been used in place of "subtlety".Subtly is an adverb, i.e. the description for an action. subtlety is something which may be possessed, i.e. i character trait.
Come on guys, its really distracting trying to read through an article only to find basic grammar mistakes like that, and it seems to be a common theme with that one word

i thought were here for the cars not for english class

I love the content on Speedhunters but at least 80% of articles have spelling and or grammar errors. Also the suspension section of this article the suspension used is Bilstein PSS9 not BSS9.

Well considering the data above I think it's more like 'need' than 'got.'

That is just gorgeous.

That license plate though…

LOVE the stance and cleanliness. Just disappointed with the use of Rotiforms as the Fuch reps.
VERY pretty shots Larry!

What's there to be disappointed with?

This "less is more" build is definitely a nice break from the over-the-top RWB builds (as awesome as those are.)

I joke has always been German cars and Swiss watches for me. I'm not sure why but there is just something about

I joke has always been, it's nothing but German cars and Swiss watches for me. There's just something about buying a car that can go 160 mph right off the showroom floor. I'm on my second Porsche now, but I have to admit I kind of miss the days when there were no cupholders or superfluous luxury items in the cockpit. I'm not sure why but it was more fun driving a pure mechanical machine or I could feel the road surface through the steering wheel

Simple has never looked so good!

Ive seen this car in person, it is CLEAN! 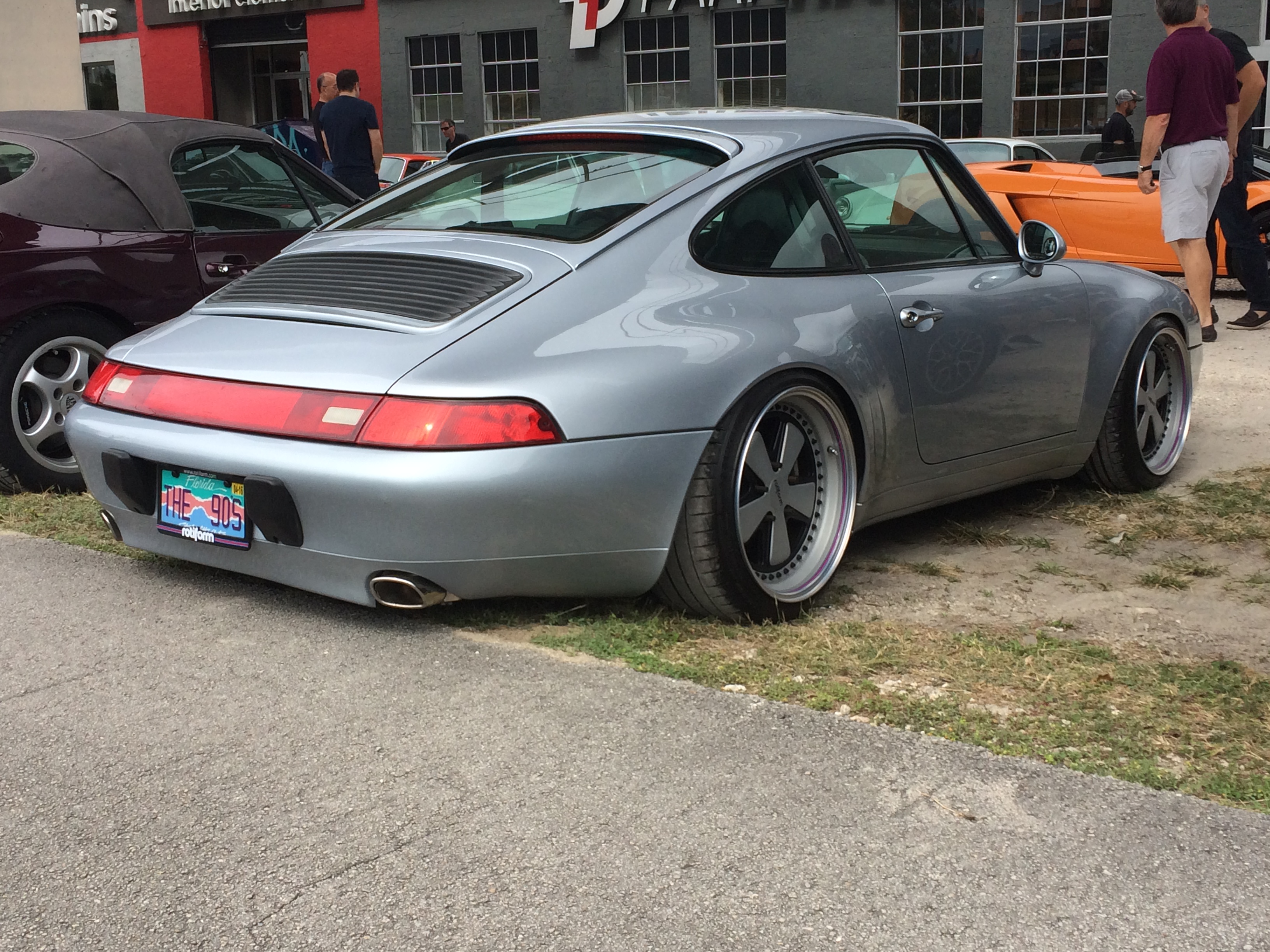 The gaps on the nose piece don't look right. Under the headlight, it's quite small, and then tapers out as it moves away. Is this just the angle of the photo? And the hood gap to the nose doesn't look right at that angle, either.

Could it be because it's a Turbo front bumper on a narrow body? Even the Bumper part of the front wheel arch is a little different because of the different widths. Yes, you could probably flex the ends in a little but like you pointed out - the fit wouldn't be perfect. It wouldn't stick out so badly but the rest of the build is so clean/crisp.

Hey you guys took those pictures in the public garage in Sunset Harbour. That's three blocks from my place. Why didn't you get pictures is the steel blue slant nose Ruf?

This is the new favourite...smooth and clean and not OTT

993 is my favourite of all the model, shame I didn't buy one when I was in the market for one. Now it's out of my league.

Banging photos and what a car! Crushing it Larry and Louis. I wish I had bought a 964 or a 993 when there were the price of a basic Golf six years ago. Should have, would have, could have...

Don't want to be a hater but I think you should use that parking lot (it looks so good) to shoot something more....unique. This build uses simple yet old recipe and since everyone does this 'clean' look it just lose personality imo.

It's so badass!! Those rims are perfect for that car.

And Larry is still the best photographer

How to modify a late model. Pales RWB into oblivion. Proper rims too...

This car has me coming back. beautiful car and beautiful work. Thanks.