The ’80s and ’90s produced arguably some of the most iconic ‘everyman’ performance cars.

The Lotus Carlton, the Sierra Cosworth and the Skyline GT-R are just some of the cars that we all continue to lust after, decades after their inception. Here were cars that weren’t reserved for the wealthy upper class – at least when they were first sold, today is a different matter – but rather aimed at the ordinary man and woman. They very much epitomised the ‘one car to do all things’ mantra. Drive to work on Monday, trackday on Saturday.

Come to think of it, are these the last of the ‘race Sunday, sell Monday’ cars? I’ve digressed, so let me get back on point…

As it transpires, our good friends at Rotiform are thinking about the exact same thing. They even made a film, so let’s go deeper…

Personally, I don’t think I could ever pick an absolute favourite from this era, but I guess these two wouldn’t be the worst to wake up and find in your garage. In a curious sort of way, both the E30 M3 and RS2 are very different and very similar cars at the same time.

Whilst their differences are obvious, a front-engined, naturally aspirated coupe versus a turbocharged four-wheel drive estate, their origins both heralded new dawns for their respective manufacturers. Both are the first of their kind – the first M3 and the first Audi RS model.

Both manufacturers turned to motorsport to create the cars too. BMW Motorsport were involved with the M3 whilst Porsche was heavily involved in creating the RS2.

The M3’s story is a familiar one, but the rarer RS2’s story isn’t quite as well known. Based on the Audi 80 Avant, the RS2 was the result of when Audi and Porsche worked together to build something a little bit special. As such, the RS2 proudly wears Porsche badging along with Porsche-branded Brembo brakes, often to the derision of those that don’t appreciate the car’s history.

Whilst Audi took responsibility for the body and quattro four-wheel drive system, Porsche worked its magic on the boosted five-cylinder engine, suspension and brakes. This is a mid-’90s estate car that could out-accelerate the supercars of the time, and even an F1 car of the same era. Well, to 30mph at least.

The M3 itself was without question the beginning of something wonderful too. It also remains the only car more successful than the Porsche 911 in motorsport, with the E30 establishing this particular dynasty.

Both cars have earned their reputations as standouts from an important era in automotive history. Not only for what they achieved on their own merits, but also the lineages they started which have gone on to become pillars of the performance car world.

Could I pick one over the other? Not a chance. 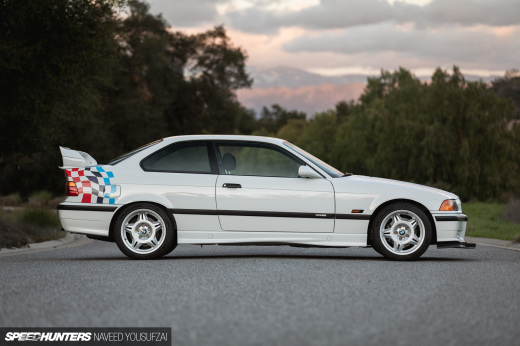 Each to there own but to be quite frank I find them both offensive. Unless they're rebuilt write offs they've taken 2 iconic performance cars and made them as useless down a good road as a slammed VW Lupo. VAG Scene - F*g scene.

I'd have to say I'd prefer a Mercedes Cosworth Evolution over these two but that's just my opinion.

There's just something about sleeper wagons. I love reading about the rs2.

More junk in the trunk, baby. Those wheels would have to go though.

I love both. However, I gotta say it somehow feels more unique to own an RS2 than an E30 (not that I own any of them), but that's just me.

Cars are nice too!

@butt So true! E30 M3 and W201 Evos were true racing icons during their time.

my Aunty Piper got a nearly new red Mercedes-Benz CLS-Class CLS63 AMG just by part-time work from a macbook air... see it here=====max34.ℭomllllllll

I love these cars both, i wish though the w201 Evo was inlcuded.
I still can't help myself everytime i see that particular audi RS2 these rims are so repulsive

still that is just my opinion, i respect the choice of the owner, and i think he does wonderfully keeping such an icon street ready and drives it!

I prefer the RS2 because I am a sucker for a fast estate.

How could I get these pictures in higher resolution? They would make for a great wallpaper.

Great film, but god those wheels are horrid

Positive lip ftw! I'm probably the only one that loves the RS2 aboves wheels but I don't care. It's brilliant. It has a certain period correctness while still being individual.
I like e30s, I like estates, I like m3's (the original, rawest and best anyway)
Errrrrr.. I'll opt for the fastest thing in the photos.
So that will be the 747.

You're telephone dials are inside out.

My Uncle Jacob got a 2012 BMW 3 Series Coupe from only workin parttime on a computer. Look At This

audi all day nicer in everyway

my best frends dad just got Infiniti M Sedan only from working part-time off a macbook. Go Here
see it here=====Earn.pro70.comllllllll

Those intro paragraphs hit home. *salute*
And then they wonder why passionate interest in motoring industry in on the decline...

Great cars, but god those wheels (mainly) the S2 look stupid. See it on a lot of British and Euro cars.. It makes it lose its toughness...

just as Harold implied I'm stunned that anyone able to get paid $7900 in one month on the computer .see it here=====net.pro70­­.Comllllllll

just as Grace replied I'm blown away that anybody can get paid $8638 in four weeks on the computer . see it here=====max34.ℭomllllllll

That E30 is a beauty.
Snapped some shots of it at the Meguiars BBQ meet, not so long back.

My Uncle Eli got a nice 12 month old Porsche Cayenne by working parttime from a laptop... hop over to this web-site ......5newtime.comᴵᴵᴵᴵᴵᴵ

my Aunty Aria recently got a stunning green Mitsubishi Outlander Hybrid only from parttime off a computer. go..............richway3.comᴵᴵᴵᴵᴵᴵᴵᴵ

my friend got Toyota Camry Hybrid only from working part time off a macbook air... check out the post right here
see it here=====Earn.pro70.comllllllll

my co-worker's mother makes $77 an hour on the computer .

my Aunty Claire recently got an almost new gold Chevrolet Malibu Hybrid only from working off a macbook... go right here
see it here=====Earn.pro70.comllllllll

my Aunty Taylor got a six-month old Mercedes-Benz CLS-Class Sedan by working part-time online... you could try here

what Victor replied I'm shocked that a single mom able to profit $4059 in 1 month on the computer . here=====net.pro70­­.Comllllllll

what Jeff implied I am blown away that anyone able to make $4397 in a few weeks on the internet . check it out
❥ ❥ ❥ ❥ ➥ ➥  ➥ http://tinyurl.com/ztkz6fy

Weird to compare the E30 M3 & RS2.. Surely the E36 would make more sense since they were actually contempories?

If only BMW had produced an E36 M3 touring model, the comparison would be perfect..

My Uncle Brandon got a fantastic blue Kia Forte Hatchback by working part-time off of a computer. see it here=====max34.ℭomllllllll

The wheels on the RS2 are the most DISGUSTING thing I have ever seen... Do everybody a favor and change the wheels, even some hubcaps from repco would look better.

superpern Except it's an L1011 Tristar.