As Dino mentioned in his event intro post, the Speedhunters were out in force at Monterey Car Week this year. But while he and Louis embarked on a blistering tour of the Car Week festivities, I spent most of my time at Mazda Raceway Laguna Seca drooling over vintage race cars and soaking up the atmosphere at the 2016 Rolex Monterey Motorsport Reunion.

I’ve got plenty of stories on the way from this year’s Reunion, but I want to start out with a look at one of my favorite cars of the event. It’s not a Ferrari or a Porsche, but a Pontiac – a 1964 Tempest to be exact.

Herb was a well known engineer who worked for Pontiac during the glory days of the ’60s and ’70s, and is especially renowned for his work on the Firebird Trans Am. In 1970 he decided to turn his wife’s Tempest daily driver into an A-Sedan racer, and it found a lot of success. Things got even more serious in 1971 when they repainted the car silver and decided to campaign it against factory teams in the highly competitive SCCA Trans-Am series.

Running a Pontiac V8 that was de-stroked to 303 cubic inches to meet the series rules, the Tempest made its debut at Lime Rock with Bob Tullius behind the wheel. The team missed qualifying and started at the back of the field, but Tullius quickly made up ground, eventually winding up in second place behind Mark Donahue’s Penske Javelin. Late in the race the Pontiac blew a head gasket and was forced to retire, but the legend of the Gray Ghost was born.

Not only was this a much older and larger platform than the pony car competition, the Gray Ghost was built in a home garage and campaigned by a group of moonlighting Pontiac engineers in their spare time. It instantly became one of the more unique Trans-Am entries out there.

With its extra wide front tires, negative camber and softer springs, the Pontiac was especially competitive in the rain. Unfortunately, the experimental nature of the car led to several mechanical DNFs, but in the races it did complete, the Gray Ghost typically finished near the front of the pack, right there with the factory-backed teams.

After the ’71 season the car was sold, but it continued to be driven in A-Sedan competition and was last seen at a vintage race in 2000. In 2015 it was purchased by John Hildebrand and given a full restoration by Peterson Motorsports in Sonoma before making its debut at the Rolex Reunion.

Not only is the Gray Ghost a Pontiac legend and a true underdog, it was one of the most distinct race cars on track at Laguna Seca over the weekend.

It’s an important and welcome addition to the field of historic Trans-Am racers, and I’m very much looking forward to watching it race many more times to come.

Thanks for spotlighting this beast, the Trans Am race started shortly after I arrived on Saturday and it immediately grabbed my eyes and ears.  Definitely one of the best sounding cars on that grid!    It was a riot to watch something this big snake through Turn 4 in a 4 wheel drift, just amazing.

oooohhhhh I can't wait to see all of your coverage Mike super jealous! That first rolling shot is awesome---long, low and wide at its finest. What a superb time in racing! TA alley at 'Seca should be enjoyed by all

Now this , is an American car that I appreciate .

Take note: this is how fender flares are done!

Yup, and this reminds me how bad the bolt-on flares look. You can't say these fenders don't look great.

my Aunty Caroline got a nine month old Suzuki SX4 Sedan by work using a lap-top... have a peek here
see it here=====jobocean3­­.ℭomllllllll

what Teresa responded I'm shocked that some people can make $5505 in four weeks on the internet . look here

cool car, cool history, i like the look of it although it has some strange proportions seems like it needs about 3 feet taken out the boot.

my step-mum just purchased a stunning cream Volkswagen Jetta SportWagen from only workin on a computer. why not try here ......5newtime.comᴵᴵᴵᴵᴵᴵ

Anyone else think it looks kind of like an XXL Hakosuka?

Herb Adams is one of my personal heroes. His biography makes me think of modern tech moguls. An innovator with zero regard for rules or corporate hierarchy. He did amazing and outrageous things in the 60's and 70's but would have flourished in today's economy that rewards disruptors. A rogue engineer who loved to upend the status quo... constantly. (Is that him in picture GTO-09?)


On the other end of the spectrum was Bob Tullius. A brilliant driver/owner/gentleman. Somehow he turned racing into a business (instead of a cash bonfire) AND did it without coming off as a giant egomaniac. One of the great American drivers.

The world needs more of both of these types of guys!

I'd take this over a Ferrari or Porsche or any of their ilk any day.

These trans am car spotlights are always gold! *scrolling craigslist for a tempest*

tenpennyjimmy It does have that boxy look to it, and the silver paint also brings the Hakosuka to mind.

I remember seeing this car compete at the Trans Am race at Road America in 1971.  Amazing car then and now.  Thanks for the great article.

It did really well at the Reunion too. I was surprised to it see it hanging out near the front with the Boss 302s and such. Reminds me a lot of the green Dodge Challenger regarding its story.
Very cool!

I love this car!

my Step mum recently got a great Mercedes M-Class SUV just by some part-time working online... hop over to here
see it here=====jobocean3­­.ℭomllllllll

JoeKendall Thanks! Wish I could have been around to see it back then too!

My Uncle Alexander got a stunning Mercedes C-Class Coupe only from working parttime off a home computer. hop over to this site ......5newtime.comᴵᴵᴵᴵᴵᴵ

This car is my favorite Race Car!

A little known rumor of a fact is that the car was first painted chartreuse. When Mr. Tullius saw it for the first time - he refused to drive the car. Can you imagine an obnoxious color like that on a car that large?!

That and Chartreuse Ghost just doesn't sound right! History was made.

Thanks for the feature.

Herb Adams had wanted to paint the car chartreuse, because he thought it would stand out, and he happened to have a gallon of the color.  He was overruled by the other team members.  The colors chosen were in memory of the 1963 lightweight Pontiac Catalinas built for NHRA Super Stock drag racing, nicknamed the "Swiss Cheese" Catalinas because of the lightening holes. Less then 20 were made, and they were silver with blue interior.

Herb Adams had wanted to paint the car chartreuse because he had a gallon of the color and he thought it would stand out, but the team overruled him.

The original color combination chosen was in memory of the 1963 lightweight Pontiacs, less than 20 of which were built on the production assembly line for NHRA Super Stock drag racing.  They were known as the "Swiss Cheese" Catalinas because of the lightening holes, and all were silver with blue interior.  A lot of attention was given to matching the original silver when the car was restored.

as Gregory explained I am alarmed that a person can profit $9777 in 4 weeks on the computer .see it here=====net.pro70­­.ℭomllllllll

what Esther answered I cant believe that anyone can get paid $9626 in four weeks on the computer . see it here=====max34.ℭomllllllll

So wonderful that this amazing platform is still representing Pontiac at these events.I regret shipping my silver '64 Le Mans off to Midland, Mich. In1978.That car had a 1970 RAIV balanced and blueprinted by King Speed Shop,Lansing IL.Factory internals were all forged pieces.In 1973 the only header manufacturer for this engine combo was JR headers also in Mich.Only reason there was a template for them was that Delorean and his chief engineer had them make a set for their '64 GTO.Being only the second set produced they were outrageous- $385.Never got to track the thing,but it was so well balanced that I used to power slide,(drift nowadays),the sharp cloverleafs at 75 MPH feeling in complete control.So its not surprising to me that Gray Ghost is such an awesome machine.Love your work Herb.Thanks Speed hunters for this wonderful performance site.

Wow, I didn't know you could earn $4593.69 spamming on this site...I did just that and not only did I earn the money but I also got a free 1962 Pontiac Tempest formerly owned by Sandi Adams. And this white haired old gent came in the trunk...said he'd pissed off his wife in 1963 and he'd been hiding there ever since.

I loved working on this car while it was being campaigned in SCCA GT-1 at Summit Point, WV. The owner was a local Pontiac Dealer named Louie Spoerl from Cumberland, MD. The highlight of my time with the car was taking a victory lap after it won for the final time. 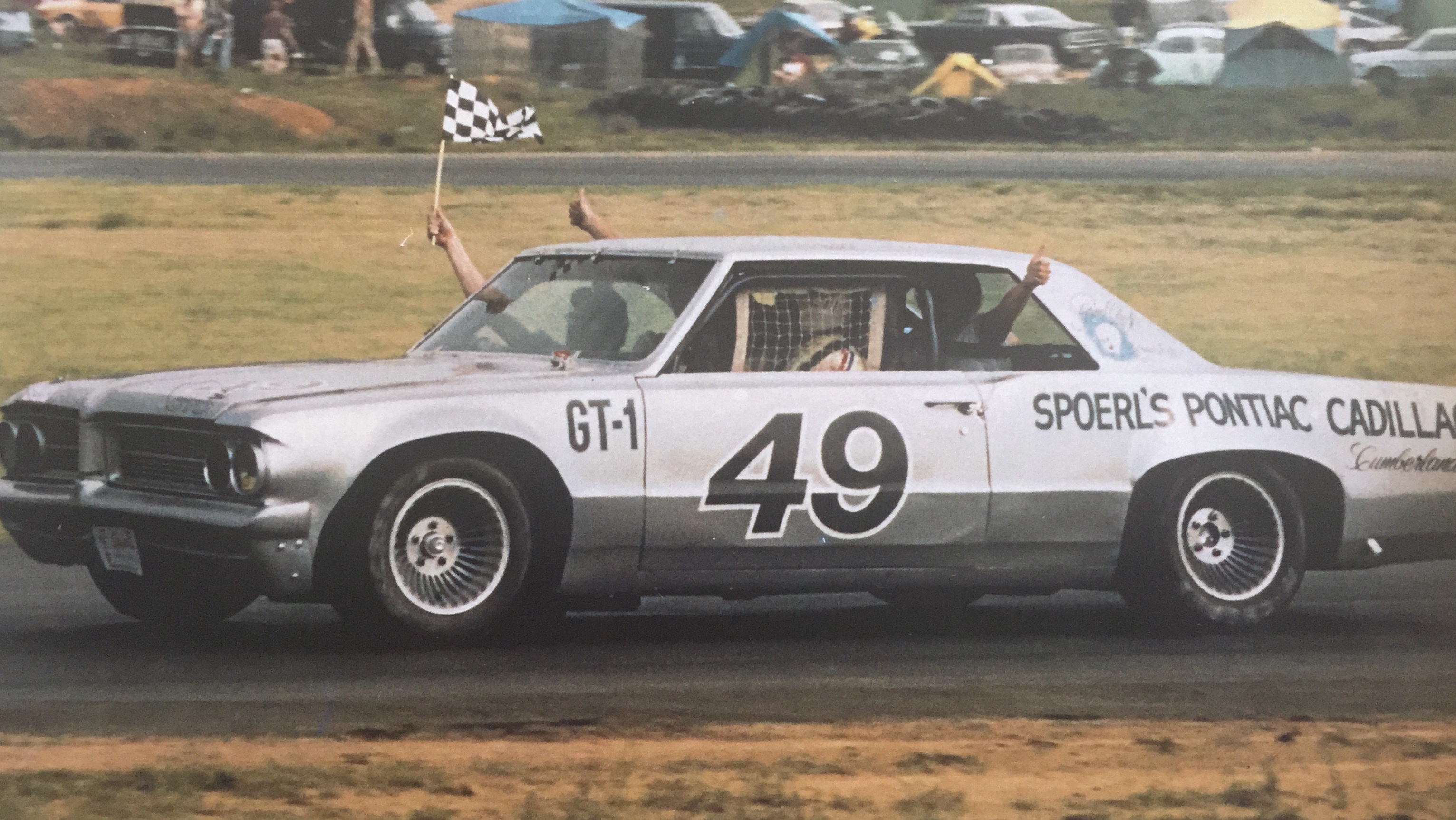