Nobody Puts Baby In The Corner

It’s difficult to know what to mention first here, the car or the driver. The former is one of the most extreme competition saloons of the ’70s, and likely the most famous Vauxhall racer ever. The latter is one of the most charismatic drivers of the period, a giant bear of a man whose pint-and-a-ciggy laid-back attitude off track was only matched by his fierce competitive instinct and insane number of victories on track. He was the king of sideways, which is no surprise given he was often driving a car like this.

This, my friends, is a proper racing car. Her presence at the recent Classic Motor Show pretty much made my day.

Watching video of it on track is a terrifying thing to behold – press play above you can see for yourself. The tail is constantly threatening to break loose, the bellowing V8 is shouting away as Gerry Marshall plays with the throttle, dancing the car through corners before unleashing all its horses down straights. Cars are blurs as Baby Bertha claims another victim; though just imagine the pack of Super Saloon Escorts, Skodas and more biting at her heels….

Vauxhall tuning magician Bill Blydenstein oversaw the design and build of the latest in Dealer Team Vauxhall’s (successful) efforts to dominate the 1970s British saloon car scene. The iconic silver, green and red liveries were instantly recognisable – as was the brutal sound of this car.

Under the hood originally lurked a hulking 5-litre, Repco-tuned, GM-Holden V8 sourced from Australia. Although the original engine is long gone, a GM V8 still sits down low and far back under the hood – which is why there’s the space for the gaping, bird-like intakes on the nose.

The one-off is – very loosely – based on a Firenza droopsnoot coupé, though barely any of the donor shell remained by the time this silhouette was built up in 1974 using some of the remains of its crashed big sister, the Ventora V8 based Big Bertha. A rigid-backbone spaceframe chassis was mated to Big Bertha’s De Dion rear suspension, with innovative inboard front suspension designed by Frank Costin, the chassis specialist behind Marcos. This was radical for the time, but went with the overall concept: the car’s shape is defined by extreme concepts.

On the outside, her super-straight lines squaring the car off at the shoulders, making for an uncompromising shape. The body produced oodles of downforce – much as the V8 fought it all the way.

Vented disks did what they could to deal with the skateboard-size deep-dish split-rims – 15×12-inch at the front and 15×15-inch at the rear – with inboard units from an XJ6 at the back.

Her DTV predecessor, another Firenza-based racer nicknamed Old Nail, won 62 races in four years, so Baby Bertha had a lot to live up to. Three lap records on her first weekend showed that wouldn’t be a problem; eventually she won 40 out of 43 races entered. Of those other three, there was a second place and just two DNFs; Marshall and Big Bertha took the ’75 and ’76 Super Saloon Championships and would have won in ’77 too had they completed the season.

I love how basic these Super Saloons look, both inside and out. Baby Bertha is just so raw and uncompromising. This is a man’s car, with no concerns over comfort, over just how hardcore the steering was, how delicate the throttle or difficulty of maintaining traction. It took cojones to drive it. Lucky they had Gerry Marshall.

As for the man himself, he won 600 races over four decades and deserves his own feature. Racing drivers just don’t come more enigmatic.

As ever, we can be thankful to a passionate collector who brought Baby Bertha back into action for us to enjoy now. The car is a regular star at the Goodwood Festival Of Speed, and can even now be seen out on European tracks it never visited in period. It would be worth going to the Spa 6 Hours just to see…

Like Baby Bertha? You’d like the concept of her young sister too, Mega Bertha. But that’s another story…

The Classic Motor Show 2015 on Speedhunters 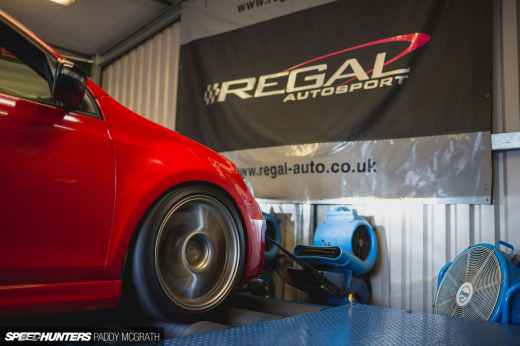 The Gerry Marshall Story is always worth telling.

This is a very Australian for a British car.

Vauxhall sold off their heritage collection a few years ago, so we should see more of these sorts of monsters a lot more as resto projects get finished! (I hear some of the cars were in a shocking state

)
Oh Vauxhall, you could of had it all, you released the 4x4 Calibra and I was over joyed at what a car it was, then came the Astra GSI's and they started blowing up, I could of forgiven that but then, as a slap across my face, you released the scourge of the road user and tuner: the Corsa, the only car that I genuinely hate with a passion.
You could of released another Nova, but noooooooooooo.....

TarmacTerrorist Yep, it's a damn shame isn't it... They just don't seem to understand that their heritage is the only thing that gives them any real respect (and I say that in full knowledge that they're the number two selling manufacturer in the UK...)

TylerHorne Yep, I'm sure that's very deliberate as well, influence wise. The cars of the '70s just got more crazy as the decade went on; I'm going to stalk these guys next year: http://www.specialsaloons.co.uk

It's a travesty, I guess Selling alot of cars doesn't mean they are built well (flaming Heater Matrix anyone?), just that they are cheap and tick most boxes of 'needs' in a plasti-coated person mover.
I was going to rant about the passing of Rover, the real MG and Austin here, and how Vauxhall could learn from their mistakes, but decided it best to leave that for another post.

TarmacTerrorist I completely agree with you. And I'm looking forward to your next post!

That video was awesome. Racing back then was so pure and exciting. And I love how the teams would show up with a van and a trailer. What I'd give to go back and see that era in person.

That thing is badass. Checked flags dropped and it just pulled away from the pack! I'm assuming the navigators voice was on the radio or dubbed in.

"Pure racing" reminds me of what Senna said of his favorite time of his racing career (his go karting days). Yah, and back then there were race tracks--famous racetracks--all over the place, especially like the famous Riverside Speedway in California where I grew up. Now most of the tracks are long gone, turned into real estate: track homes and shopping centers. I too would've loved to have seen some of these races and some of these now long gone iconic circuits.

That video is so great!

AND wide-bodied Skodas... there has to be another story to follow on these monsters surely JM?

Did you notice the centre console in the video was slightly different to the one in the photos in the article, there was an ignition key complete with a leather key fob.

love it, so raw, monsterous thing to manhandle around a small track

Putsteelsunderit Didn't even know that there was racecar based on one! Took me awhile to register what it was in the vid. It would be an interesting car under the skin I bet.

"Do Not Start, I BITE!" gotta love that for no reason.

Wildcardfox I always think of that Senna quote when I watch big dollar motorsports.

THANK YOU for the video (complete with '70s-spec gratuitous crotch shot), I've always loved the tin-top racing from those days. Sadly I was a babe in arms back then so missed most of it. And the good old Holden V8 has to be about the best sounding boat anchor ever made when it's on song. Just magnificent.