Some of the world’s most exotic, most expensive and most downright interesting vehicles have been showcased in video features on NBC’s Jay Leno’s Garage, and now our very own Scion Tuner Challenge winning MAXIMUM ATTACK FR-S can be added to that exclusive list.

If you caught Keith’s tour of Leno’s impressive facility a couple of weeks back, you’d already know that this clip was coming. Either way though, now that it’s been released you’re definitely going to want to sit down and watch it.

Because not only does Keith talk Jay through some of the intricacies of the 90-day build, but Leno then takes the FR-S out for a proper drive, and for the very first time we get to see it, and more importantly hear it, in action on the street. And believe me when I say that the Cosworth-blown boxer soundtrack adds a whole new dimension to this machine… 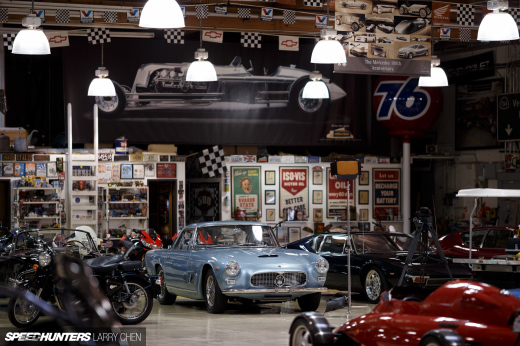 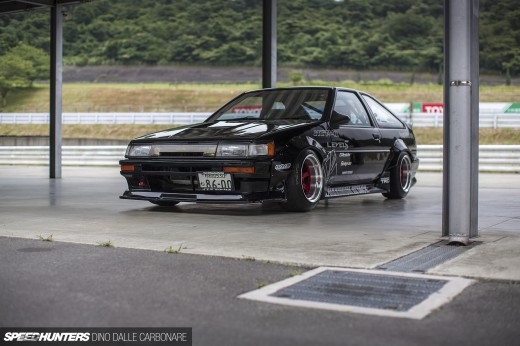 An AE86 Built To Last

Sneak it into the IMSA race in Long Beach this weekend. Put Gushi or Aasbo behind the wheel. I'll pay the fines.

this may be the coolest frs i, the world ! love the sound

Bring it to tsukuba please!!! Easily one of the coolest cars in the world and my god it looks so retro. I wonder if it would beat a N2 Spec 86. Awesome job Keith!!!

So when can we get some Speedhuntes shift knobs like what's on the car?

I‘m making a 1/24 scale model to salute the master piece.

Absolutely love the car Keith, I love vintage race cars, so this is themed outstandingly.

I respect Leno but god what an awkward dude he is.

Love everything about the build except the exhaust... I'm getting old so it would drive me crazy after a while, even on a race track.

can "respect" and "lust" be used in the same sentence??
Great to see (and hear) it being appreciated by such a world class car nut like Leno!

So awesome Keith! And so awesome finally seeing #MaximumAttack in action!

That sound really is something special though!

Honestly, that wasn't even "maximum" attack..

You guys did a very good job with the car, Jay definetly appreciated it.

Bima Leksono Depends on how you define "Maximum Attack". To some, outright power is everything. Some prefer a perfect balance. This here, is the latter. 300 horses combined with the lower weight is good enough in my books.

Lol at 11:58 keith looks at leno after he slams the hood like "are you for real my dude"

No, im not talking about the car's performance. 300bhp for me is more than enough for a guy who daily drives a 100bhp shitbox lol. From the title of the page i already imagine Mr Leno driving that car around a track or something..

Following the build process and reading the articles has been great, but seeing it in action, and seeing it appreciated by a guy who really knows his stuff about such a wide range of automobiles, is fantastic. It's another affirmation of a job well done.

zuberbomb LOL I had a real panic attack when he slammed the Kaiser hood. He can slam this one all he wants.

Bima Leksono Or consider that MAXIMUM ATTACK could apply to the design and build effort.

@Hogdog And this was after we quieted it down too. That supercharger just pushed a lot more air and make it loud!

missile Thanks! He's actually very genuine and nice in person.

Jagdroach They might just be in the works. Keep an eye on the Speedhunters store when we start selling parts.

KeithCharvonia did I hear you say adjustable dampeners?

Nice! I was happy to finally hear this thing sing!

stone_cobra don't forget to post it once done.  am itching to make another gt86 too hahaha.

I wish the cosworth supercharger wasn't so much. I get that it is a great unit but it seems that the scion is one of the hardest cars to super or turbo charge and the money you end up putting into it is insane. I see all kinds of superchargers on the Internet for 3500 to 4500 hundred but I wonder if the extra money will save you time and effort during the install. Curious and looking into the installation of this product.

Very obvious difference between a car collector and guys like Keith. This was one of the funnest Jay's Garage pieces to watch ever. Very excited to see what other builds Keith does in the future. Great Job!!!

That diffuser looks amazing. Can that be installed on a stock FR-S with stock exhaust? Do you sell it?

This is actually a really great effort, considering the time and budget restrictions. I'm seriously impressed.
Those old-school fender mirrors are still my favourite part on this car. Who would've thought they'd look so good on a modern car?

Jay Leno rocks!!! I've been a big time hardcore fan for years. Thanks for making such an outstanding JDM Tuner episode! Awesome! Appreciate it Jay. Cool. We definitely need many more episodes like this. That would be great. Keith Charvonia did a super outstanding job building this car in only 3 months/90 days, wow! Sweet!! Sounds like a mean beast. 300 hp and as light as it is, it's going to move. Wonder what the torque is? Love this new 86. Nice. Only 15k budget, amazing how the build is such a high premium quality. Love the old school TRD racing colors. I remember those. Just love the whole theme. The mirrors I love, the rims, the yellow, orange, red strips on the white and so much more. The Suby/Toyota engine is unique. As a TRD person/family naturally I will tend to like this FRS. I've also have been liking Suby's for a while because of my cousins and friends. Some of them are into Suby's. Some of my friends call me SupraMan, because I'm into Supra's and own one and starting to collect more Supra's. I hope you build more JDM Tuners Keith, that would be cool. Just keep building all kinds of cars, as always lol. You are truly gifted, talented and skillful Keith. Keep up the good work and doing what your doing , your doing fine. Oh yeah, Jay you were the Best, the Greatest at the Tonight Show!!!

Yeah sexy and classy. Not to mention vintage.

jay8393  Yes I agree the mirrors are sexy, classy and vintage. I am too very impressed with this build considering the extremely limited budget and time.

The Lowrider episode was another outstanding episode. That's when I started calling Jay a.k.a. JAY "LOWLOW" lol

KeithCharvonia can you elaborate on why the car is "kind of" street legal? why did you have to get special permission to drive it on the street?

@Guest Don't expect him to respond, atleast not any time soon, either he's too busy or doesn't care to respond.

The car is owned by Toyota and used for show purposes. I signed a contract saying I wouldn't drive it on the road or track. Fortunately we got Scion to put a manufacturer plate on it so Leno could drive it, but it was an exception.

It will be for sale through Speedhunters soon. I will have to confirm that it will clear stock exhaust tips.

KeithCharvonia Thanks Keith. Also, where can one get those fender mirrors?

KeithCharvonia  Yeah that is understandable, nice to know they made an exception.

I have always wanted Jay to make an outstanding JDM Tuner show like this one. He has done certain shows some what like this before, but not exactly this way. Finally! I have been waiting for this for a long time. Hope he continues to make many like this one. I like his classic nostalgic Japanese car shows, his European shows classics and new, same with American cars, but I have been yearning for a show such as this one. He does not do many like this episode. I think if he were to do many more like this show the ratings would go through the roof and they would even more successful. Shows like this one is what cars guys-women-people like to see now a days(within reason). It is the future, where we all are headed before electric cars start to really take over(which probably means even hybrids may become a thing of the past as well). You did a great job Jay and Keith along with Toyota and Subaru. Continue to make episodes like this one Jay and soon not only double but triple and much more your subscribers on YouTube. From 1 Million to 2 and 3 Million and much more. This is what the new, young generations what to see, at least the car people do. Love your Jay Lenos Garage website show. Thanks BIG DOG.

I just came up with this, A.K.A. JayDM Tuner, JaySpec- LOL

need's a turbo...idk. Superchargers are okay, but not gutless which a turbo can get.

akatmap  I think it's probably because within reason supercharger's are more affordable then Turbo's. The turbo, the accessories/kit, so many turbo components(waste gauge, blow up valve, sometimes racing intercooler's, etc., and so on). Keith only had a 15k budget to build this tuner, so supercharger would probably be the way to go. Not to mention the engine/motor would have be reinforced internally to handle a turbo without eventually blowing, which means more money and as Keith mentioned no internals have done to this FRS. It's stock N/A that had a supercharger/procharger put on.