It’s been a little while since we’ve had an update on Mad Mike Whiddett’s Project RADBUL, but as you’ll see in this new clip from Red Bull, big progress is still being made on this crazy little car.

Since the last post, Mike took the Mazda MX-5 on a 450 kilometre (280 mile) journey down New Zealand’s North Island to Pulse Performance Race Engineering – the workshop where the balance of this no holds barred build will be seen out. PPRE’s Warren Overton has been building Mike’s motors since the very beginning, and you might also recognise his name as the brains behind that world-first six-rotor engined Mazda RX-4. From a pure horsepower perspective, the twin Garrett turbo equipped 26B four-rotor engine destined for RADBUL is a different level of lunacy, and as Warren and his team explain in this video, they’re pulling out all the stops.

As this project inches towards completion the excitement factor is growing exponentially – next stop the PPRE dyno!

A Wild F100 With Too Much Horsepower 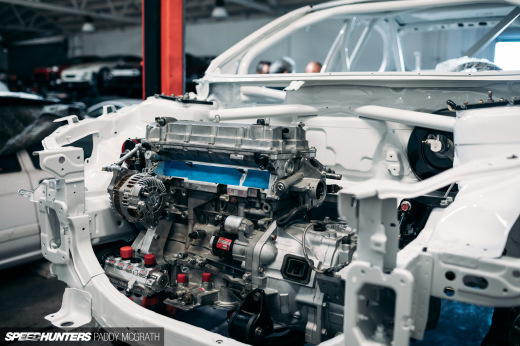 The link doesn't work, it should be http://www.speedhunters.com/2013/11/sixth-dimension-the-ppre-6b-mazda-rx-4/

Beast of a build..Hope you guys win the championship with the car..  #RotaryKings

The sound must be insane!
Anyways, I would love to know the specs on his Mazda BT 50 pickup. Looks interesting.

Do all four screamers let go at once or are they staged so they play a tune when you lift off?  Also, no dump valve?

It was literally only about 18 hours ago I went searching the interwebs for the latest RADBUL updates.  We're obviously on the same wavelength.

Rename it Ragebull.. More fitting for this engine.

MrSOLOMON85 Its something to do with Internet Explorer, try chrome etc it works

Mad Mike said the part he show (in the box) is brand new from Mazda , and for BADBUL , aka the RX-8 ? So the RX-8 will still be use in certain event , and hence the parts ? Or just updates or something ?
Amazing dump-pipe design ! I absolutely love it !
It said PPRE 26B on the "block" , so it's a specially made "block" by PPRE ?
Absolutely amazing , can't wait to see it perform on track !

This one is gonna be a screamer with those wastegate dumps!

@maxvr6 that didn't work either do you know any other way

I think Mike is using the RX-8 in the Red Bull event he's organizing.

Sweet Jesus that's gonna be a wild one to handle when it's out of the stables!
That brake setup is just perfect and love the engine/bay setup. Tons of power, well balanced and a mad pilot to keep it in check.
Can't wait to see this bad boy finished.

lachlan oops, looks like i am stupid after all - you get the picture anyway :'(

what about the real reason he no longer has it at the original workshop where it was being fabricated? you know, how they were asked to pay for the work so far and refused so they chucked it outside?

As a business owner if someone doesn't pay the car doesn't get released to another work shop. The deal is Townend does the chassis fabrication build and PPRE finish the mechanical side. Get your facts straight mate!

roido11 Not true Roido. There are plenty of examples of people not paying for so long, taking up storage space the business owner gets so tired of it they just release it because it doesn't warrant the headache. I've seen it happen for several shops I've worked for. Both high end shops.

As a business owner you might not do this, but that doesn't mean it never happens.

theyarenotreallyintocars you are correct if you look at the cage its completely different to the cage that was designed and built at TBR just go back to the original videos and you will see. by the looks of it all the fabrication and custom work done by TBR has been cut off the car. guess thats what happens when you dont pay your bills. I dont know if thats what actually happened I'm just going off what I can see.

RJRB theyarenotreallyintocars Seems like a shame because the first cage looked much better (visually). These things happen in car building all too often though, so it's to be expected.

Must be more to it than MadMike refusing to pay? If he wanted a top notch custom drift car, he would be expecting to fit the bill that comes with one. But it is a shame as the work that had been done was a piece of art.

RJRB theyarenotreallyintocars  there may be some truth to the your claims about change of fabricators but I cant see how you think the cage is completely new, door bars have changed slightly by the looks of it but looks pretty much the same cage to me.

I cannot wait to hear the initial engine start up. Please post it. Brad talk to Mike about it.

i wish they could just use YOUTUBE... this redbullplayer or whatever you want to call it, is so badly optimised for people with slower internet speeds.. on yt i can watch 720p 60fps no problem, but on this thing it cant even buffer without me pausing 480p... -_-

RDS its just a standard housing no specially made part there, would have been ported though.

Alien924 2bAUS  RJRB theyarenotreallyintocars  Actually looking at it again the cage is different, and the crash bar/ rad support pieces. Must have been a big bust up for the original guys to have completely stripped the car back.

EMyrdal It's just generally a bit crap. Hardly works at all on mobile!