In the mid 1960s an unassuming cherry red ’56 Volkswagen Beetle shook up the NHRA establishment. Cutting 13-second quarters on trap speeds approaching 100mph, EMPI’s iconic Inch Pincher was more than just a thorn in the side of the American V8-dominated institution – it was the machine that paved the way for a worldwide drag racing movement that half a century later is still going strong.

So what better way to wrap up our VAG mini theme then, than look at one of its spiritual descendants – a part-modern, part-vintage ’68 Bug built for straight-line speed.

It’s a truly global story too, because although this Herbie-themed creation now calls New Zealand home, the well-travelled machine was originally created and raced in Canada, but purchased by its new Kiwi owner out of Sweden.

The first time I saw the Beetle was during the roll-in for this year’s 4&Rotary Nationals Show. Funnily enough, it was the first time its owner, Nigel Scott, had physically seen the car too, as the ship from Sweden it had arrived on after a couple of months at sea only docked in Auckland that morning. How he managed to get it through customs and off the port that quickly I’m not sure, but the car ended up just making it into the show in time.

Although he was new to the car, Nigel’s definitely not new to VWs. Thanks to his Auckland-based business, Platinum VW Spares – a Volkswagen-specific auto dismantler and service centre – he lives and breathes the brand almost every waking hour.

Having tried its hand at a wide range of motorsports, inevitably Platinum ended with a penchant to go drag racing. Originally, Nigel had plans to build a car from the ground up, but after crunching the numbers it soon became apparent that purchasing a pre-loved, turnkey racer would be a far more cost effective option.

And what Nigel got for his money was a proven 10-second naturally aspirated package, originally built and campaigned by John’s Bug Shop in Ontario.

Featuring a full tube-frame chassis incorporating a four-link rear suspension arrangement, it’s a purpose-built machine too. Here, with the one-piece FRP front clip, FRP doors and FRP rear fenders attached then removed, you can see how much actual steel ’68 Beetle there is left of the original car. Not much. Panels on, the Beetle tips the scales at just 580kg (1278lbs), which goes some way in explaining just how it’s able to scoot down the quarter mile rather quickly with not a huge amount of power on board.

That said, the flat four hanging out in the back is an impressive looking and performing piece of engineering built around a Volkswagen Type 1 engine.

When I say built around I’m using that term rather loosely, because it’s not hard to see that the engine is far from that that originally powered the ‘people’s car’. At its heart is an ARPM two-piece crankcase fitted with high-compression forged pistons, Carillo rods and a Scat 84mm stroker crankshaft pushing cubic capacity out to 2457cc. More obvious additions are the two giant Geers 62mm Terminator carburetors which flank race-prepped Autocraft cylinder heads fed by giant 50mm diameter intake valves.

You gotta love the tuned-length stainless steel exhaust manifold and upswept Stinger tail pipe too. Temperature sensors are positioned in each of the branches, which of course give a good indication of the tune.

Thanks to their rear-engine layout, Beetles like this one generally have no problem putting the power to the ground, nor achieving quick 60-foot times. In Herbie’s case there’s a custom-geared VW Kombi/Bus four-speed box, running through a Kennedy/Black Magic clutch to a custom full spool differential. On the business end, custom axles and Porsche CV joints run to Wilwood Wide 5 hubs and 15×8.5-inch Center Line Wide 5 wheels, wrapped in M&H Racemaster 8.5/26.0-15 slicks. There’s plenty of grip, which of course necessitates the use of wheelie bars (not fitted for our shoot) to go against the will of the front wheels and keep them firmly planted on the ground.

It’s much more basic at the front, but no less exquisitely-executed, with an A-arm layout featuring drag-specific Lamb Components coil0vers. As evidenced by the small JAZ cell sitting up front, the Beetle only carries as much fuel as it needs to get down the strip.

Although the Platinum crew are still very much coming to grips with the chassis set-up given the limited number of times they’ve had it on the track thus far, both Nigel and the Beetle’s primary driver, Allan, are pretty confident that there’s nine-second potential in the current guise. That result would put it on par with some of the quickest naturally aspirated Beetles on the planet.

To be honest though, if I had this car in my garage I don’t think I’d be at all worried about how quick it did, or didn’t go. I can’t put my finger on it, but there’s something so right about a drag Beetle. Does anyone agree with me?

I’ve waved my camera around in plenty of race car interiors, but this space has got to be one of my all time favorites. It’s pretty evident that there’s nothing here that doesn’t need to be, which of course has everything to do with weight reduction and nothing much else. But the build quality and attention to detail is some of the best I’ve ever seen.

That, of course, includes the 4130 chromoly bar work that forms the skeleton of the car. Although details are thin on the ground, Nigel believes that the chassis was actually built in the USA before being finished off in Canada.

As far as metal seats go, this one actually looks pretty comfortable. It’s seemingly been fashioned from a single sheet of aluminium too, and even features the same detailing as the floor and door panels.

All 0f the electrical ancillaries are neatly mounted near the floor on the passenger side of the cockpit. Given the carburetors there’s no engine management system of course, but an MSD 7AL-2 for ignition control, and from Innovate Motorsports a TC-4 configured to measure exhaust gas temperature, and a DL-32 data logger.

Here’s a look at the interior fabrication work toward the rear of the car and the Lexan polycarbonate windows, which are an integral part of the weight reduction programme. The air ducts in the rear side windows supply a cool breeze across the top of the engine where it can be sucked up by those carbs.

Just hours after I finished up shooting the Beetle, the Platinum team began stripping it down for a ground-up rebuild over winter, starting with the engine. Even though he’s only driven the car a handful of times, it’s easy to sense Nigel’s enthusiasm for this project and ultimately where he’d like to see it end up. 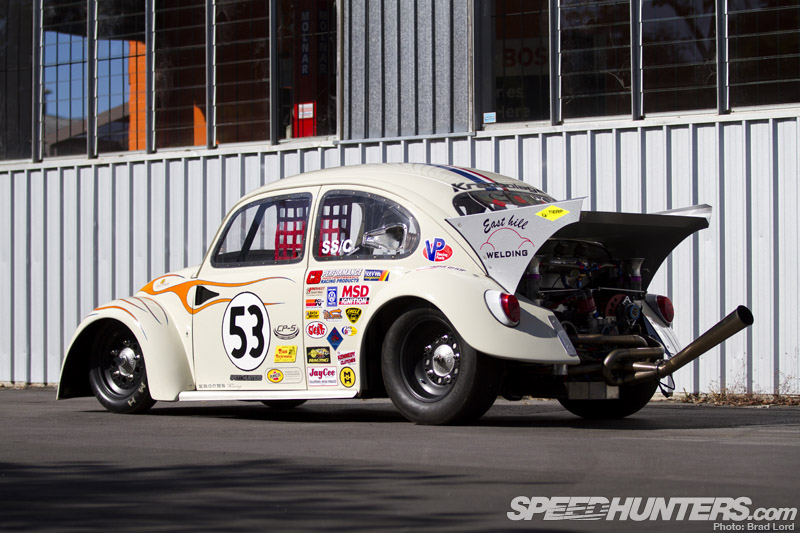 That is, with another car built to similar specifications as this one, but wholly engineered in New Zealand utilising the best local talent. It’s a likely prospect for the future, but in the meantime Nigel and his Platinum team are looking forward to the forthcoming 2013/2014 Kiwi summer season of drag racing which kicks off in October/November, and perhaps – if they’re lucky – a single-digit slip.

So there you have it: a final conclusion to our VAG mini-theme. We’ve brought you a wide range of VWs, Audis and Porsches, from low-slung show queens, to motorsport monsters, showcased the history of these brands, and featured cars from their homeland, right the way to the other side of the world. And what better way to close it off than with this look at a modern take on a true Volkswagen classic; we’ve gone full circle and ended up back at the beginning. So what do you think? What’s been your favorite piece?