As much as we all enjoy modifying our cars, it’s safe to say that there are usually trade-offs that come with said modifications – especially when it comes to daily drivers. You can make your car lower and stiffer at the expense of comfort. You can make it faster at the cost of fuel economy or reliability. You can install cool-looking body parts and then worry about breaking them in parking lots. These days though, there are actually lots of companies making stuff that give you all of the benefits of aftermarket parts with few, or none of the drawbacks.

That brings me to the first modification I’ve made to my 2012 Volkswagen GTI after almost a year of ownership: a set of KW Variant 3 coilovers. Historically, upgrading the suspension has always been first thing I do to my cars and the GTI is no different.

But seeing as how the car is my (and my wife’s) daily driver, it was important to go with something that was liveable on a daily basis. With adjustable ride height and separate rebound and compression adjustments, the V3s seemed like a perfect fit with what I was looking for.

Before I even took them out of the box, I was impressed not just with the overall quality of the stainless steel coilovers, but the way everything was presented.

As minor as it may seem, one thing I especially dug was the official KW toolkit, which came in its own high quality carry case.

Inside were all the technical documents, as well the adjustment knobs and spanner wrench to adjust the ride height. Having owned other sets of adjustable coilovers in the past, it’s nice to know where everything is and have an easy place to store these tools, whether it’s in the garage or inside the car.

Once I was done salivating over the suspension pieces, it was time to actually get them on the car. Since I’d never really worked on a late model Volkswagen before I wasn’t sure how difficult the task would be, but once we had a look it all seemed pretty straightforward. First up was to remove the stock front suspension…

… which can be seen here sitting beside its much sexier replacement.

Now I have to admit, it does feel slightly strange to be digging into what’s essentially a brand new car, but I much prefer this over the spider webs and rusty stuck bolts that can be found on some of my other project cars.

The only real hurdle we ran into during the install while doing the front suspension was getting the stock struts out. Thanks to the wonders of modern technology, I was able to easily search around the net for DIY write-ups from other VW owners. Here’s an image of the shiny new KWs assembled and ready to go in. Kind of a shame that the wheels cover these beautiful pieces up!

After a bit of old fashioned Yankee strength, the fronts were out and the new suspension was bolted in. It was time to move on to the rear…

… which proved to be even simpler given its layout.

And voilà – the new rear suspension is in! Just like those TV shows where the guys never get dirty, never have any problems and never scream swear words at the top of their lungs.

Once the new suspension was installed, it was time dial it in. Rebound and compressions are adjusted independently via knobs located at the top and bottom of each shock casing, but for now I’ve left the damping settings as they came out of the box. As for the ride height (adjusted with the aforementioned spanner wrench), I decided to bring the car down to the lower end of the range – because, hey, why not? The nice thing is these are designed to function properly no matter where you choose to set the height.

Then comes the moment of the truth, when you put the car back on the ground and see what it looks like. Yes, KW suspension is designed to do much more than just lower your car, but it’s still a special feeling to see the visual result of the upgrade for the first time.

Now I can’t say the stock Mk VI GTI is one of those cars that’s just begging to be lowered. To me German cars in general are usually pretty good about avoiding excess wheel gap and having tires that actually fill the fenders (to see what it looked like on the original suspension, check out this post), but the dropped stance made the car noticeably more aggressive-looking – even with stock wheels and stock everything else.

But enough about how it looks. How does it drive? Well, I haven’t yet had a chance to hit the track, or do any real aggressive driving, but even just winding around a freeway off ramp or cruising a back road, the increased response and more controlled body motions are easily noticeable. Impressive, considering the suspension is still set at the softer end of the spectrum.

Just as impressive was the change in ride quality – or should I say the lack thereof. I purposefully headed out on some of the crappier roads I know to see how the car handled bumps and rough pavement, and it did amazingly well. Yes, it rides slightly stiffer than stock, but my wife had a hard time noticing any difference when she drove the car. A good test I’d say, considering how the average wife or girlfriend usually favors a comfy ride above all else.

And with the V3’s adjustability, it’s nice to know there’s still plenty of room to get more out of the suspension for track days or other things of that nature.

Even better, I’ve yet to scrape or bottom out on any speed bumps or other imperfections in the road – even with the height on the lower side of the range.

Although my GTI is far from a race car, it wasn’t hard at all to see the fruit of the labor that KW and its engineers have put into designing these suspension systems. Whether its attacking the Nürburgring or just making a Costco run, KW has gone through great effort to make these things work as best as they possibly can in all sorts of situations. 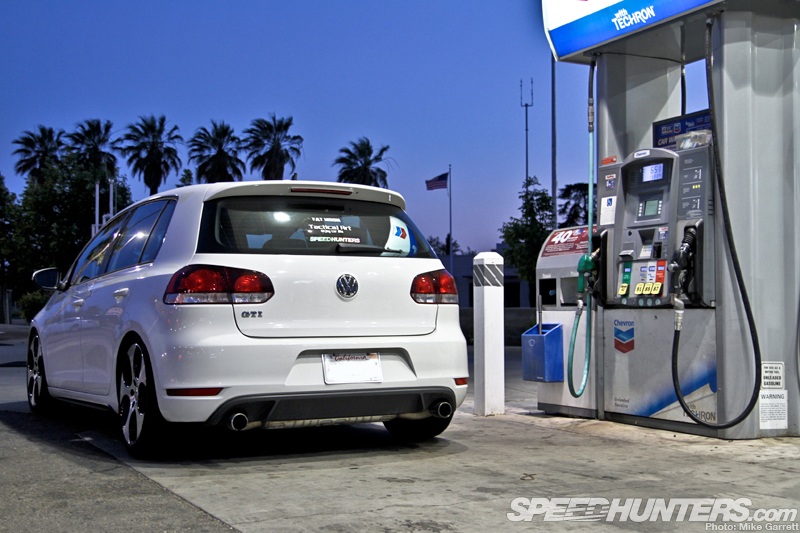 And yes, with coilover kits like these V3s, it has very much made something that greatly improves the driving experience and visual appeal of a car, with none of the drawbacks. 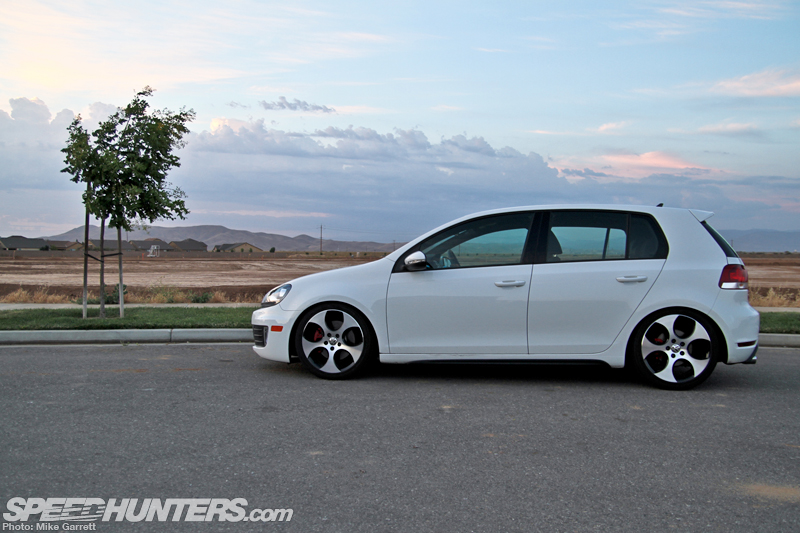 As I’ve said before, my overall goal for this car is nothing drastic. I simply want to take the things that make the GTI such an appealing package in the first place and improve on them without ruining any the car’s usability. A set of high quality adjustable coilovers is a perfect starting point, wouldn’t you say?

Now to do something about those ridiculously heavy wheels…

nice mike, thats what I'm looking to do myself in my mk6 too.  I dig the look.  just enough clearance.  Im not a big fan of the detroits, thats just me.  But the car looks wonderful.  A rear sway and a bar for the trunk would drastically enhance handling performance.  Talk about stiffer ride tho.  Anyways, looks really nice.  Hope you still got her!