SHARE The 6-hours Of Fuji: Wec Comes To Japan

The return of the World Endurance Championship (WEC) to Fuji Speedway couldn’t have a been a better success. After a twenty plus years absence from the land of the rising sun, Japanese motorsport enthusiasts were ecstatic at seeing Toyota grab a well deserved victory on their very own turf.

The winning LMP1 Toyota TS030 is piloted by the above trio, Nicolas Lapierre, Alexander Wurz and Kazuki Nakajima who were extremely pleased with their result, despite this year’s championship having already been snapped up by the unstoppable number-1 Audi R18 e-tron of André Lotterer, Marcel Fässler and Benoît Tréluyer.

And for me personally, after having spent so much time covering events at Fuji over the last decade, it certainly makes things more interesting. I haven’t enjoyed covering an event like today’s in a very long time.

I was really looking forward to seeing the mighty R18 e-tron diesel up close and of course see it and hear it run. It is an incredible machine, blisteringly quick, eerily quiet and representing a true step forward in the use of hybrid technology in racing.

I couldn’t stop looking at it in the pits!

I spent most of the morning walking in the pits, checking out the various cars that make up the three classes, from the Toyota TS030 and Audi R18 e-tron of the LMP1 class, to the Gulf Racing Middle East Lola B12/Nissan which participates in the LMP2 class…

While the prototypes are on another level in performance, aerodynamics, braking and pretty much everything else, the “regular” cars like the 458, C6 ZR1, Aston Martin Vantage and the 911 RSR aren’t too far behind and are an equal pleasure to watch.

You can expect to see plenty of action from the event, as well as some general pit coverage…

…and the odd race queen to spice things up.

The FIA has some pretty rigid regulations when it comes to where you can shoot from at Fuji. Seeing the high speed of the cars, and the potential danger for bystanders in the case of an accident, safety is extremely important so we could only shoot from the very few openings behind the fences.

With tons of photographers from around the world present at the event it did make things pretty crowded but it pushed me to explore areas and angles I had never event thought about before.

This is the Rebellion Racing LolaB12/60-Toyota, yet another awesome LMP1 car that I couldn’t stop snapping away at. Aside from the two Audis which run a 3.7L V6 mono-turbo engine (you may remember my post on this in August) the rest of the LMP1 field runs a 3.4L naturally aspirated V8. Only Toyota and Audi run hybrid systems.

Along with the F1-like shriek of the 458s it was the ZR1 that stood out the most, with that typical American V8-burble making itself heard through a pair of side exit exhausts.

The Toyota TS0303 in hyperspeed mode as it uses its V8 and hybrid system to power out of corners with incredible speed and lack of drama.

Seeing the effects of extreme aerodynamics up close, as cars seemingly plough into corners with only a brush of the brakes has to be seen to be believed. It almost looks unnatural!

LMP2 cars like this Oreca 03-Nissan also run V8s, yet slightly bigger capacity at 4.5L, but not as highly modified as those found on the lighter LMP1 cars.

Fuji-san was being shy as usual today, but I did manage to at least capture one shot of its snow-less cone.

That’s about it from the Fuji Speedway press room. I hope this short preview has given you a good idea of the sort of coverage I’ve got coming in the next few days. I’m off to my usual Sunday procession back to Tokyo on the Tomei Expressway. Over and out. 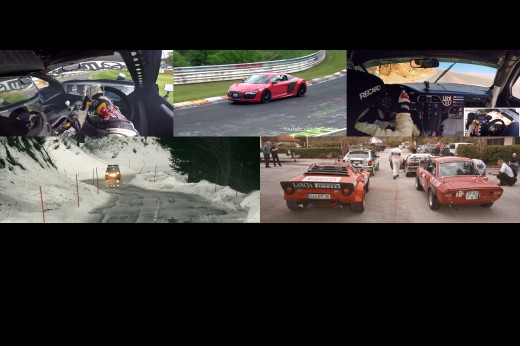 Some of those low shutter shots deserved to be printed, framed and hung in a gallery.  Incredible.

those cars are beautiful, aren't they?!
And I can't wait for Le Mans next year..Toyota should be able to put up a fight till the end next time!

Awesome race, awesome finish after 6 hours (10sec between the Toyota and the Audi....)Thanks a lot for the shots just few hours after the end of the envent !

what happen in promoting car culture when Speedhunter dun even promote their own GT1 team ...
http://www.youtube.com/user/gt1world?feature=lb&v=5zRlVvH6PWA

they are live now

I dreaming you do the coverage of event and it's really happen! Thanks Dino!

@Fede I sure hope so! I want to see some fierce competition next year. Audi is my favorite marque when it comes to racing, but Toyota is all that I drive, so it will be fun to see who comes out on top!

Awesome stuff!  Love these cars. With Petit Le-mans this week in my backyard this is awesome to see, get me excited.

Lovely, lovely photos, well done Dino. Great wins for Toyota and Porsche.
A couple of minor corrections though. Tréluyer, Faessler and Lotterer haven't won any championship; it's that Audi have won the manufacturers championship. And the Toyota's hybrid system (super-capacitors) are more capable than the Audis' flywheel. But probably only sportscar nuts would know these things,  would be able to see through Audi's all pervasive PR distorting their acheivements, so it's no slight on you that you didn't know.
Again though, great photos and I can't wait to see whatever Car Features you've got lined up.

some good stuff!!!
i recall one of my teachers from uni saying that he was going to Fuji for this race....he works for one of the LMP2 teams!!! cant remember which one though! good stuff though Dino!

@PaddyMcGrathSH Thanks Paddy!  I have even more abstract ones but I fear they won't be appreciated LOL

@Fede Yeah for me race series is mostly about the cars...just wish I had more "drooling time" at my disposal

Nice panning pics, like the melted one with the Toyota TS0303.

@speedhunters_dino  @ocgassa He would be refering to the WRT Audi Belgium team that took the Drivers and Team championships....with their Speedhunters decals, not sure what the marketing deal is.

P.S Looking forward to the full coverage of this WEC event from you Dino. Hope we have pics of the HPD Hondas, Astons etc to go along with the Toyota/Vette/Audi fest.

why on the panning shots are parts of the car in focus, but others blurred?  it can't just be the f-stop can it?  is it motion blur?  the whole car is moving at (mostly) fixed rate, so why wouldn't the rest of the car be at least more in focus?  am i overthinking this?

Currently drives for Indy in the US.