SHARE Super Gt Set Up In Fsw: A Final Look

I’m glad the Super GT Set Up post was so well received, obviously this is one area of the vast Japanese motorsport scene that is unanimously appreciated. That’s great because I have a little more to show you from my walk along the pits, starting off with a shot of the mean Raybrig HSV-101GT, one of the nicest cars currently competing in the GT500 class.

…but when Toyota’s frugal commuting appliance is transformed into something like this, well then we really can’t say anything bad about it.

Mind you this APR Prius, which competes in the GT300 class, has nothing but its roofline in common with the road going counterpart; power comes form a Toyota RV8K 3.4L V8, boosted by some sort of hybrid system.

The sheer variety on the GT300 class is what really makes Super GT so interesting form a car enthusiast’s point of view. Check out this Dijon Racing Z06R GT3! The 7L LS7 under the hood has to breathe through a 49 mm restrictor to cap its horsepower. There is no information out there on how many horses have been lost with the restriction but it’s all done to keep the cars closely competitive.

Aerodynamics pay such a big part of the cars in GT500 and it’s cool to see how the Nissan GT-Rs continue to evolve through the seasons. Just look at that front fender design, with all the louvers to help extract heat from the engine.

Are the days of the carbon fiber Craft Square mirrors gone? Apparently so! These huge mirrors are what all GT500 GT-Rs are now running, bigger and longer than what we are used to seeing and obviously having some kind of aerodynamic purpose. Side spoilers maybe?

Next to the S-Road GT500 machine was the GT3 car of NDDP Racing, which participates in the GT300 class.

If Mizuno-san at Nissan is wondering what cool new limited edition model potential R35 customers want to see released next year…well I think we all agree a road version of this wide-body racer would go down rather well!  As impressive as the R35 is, there is still tons more that Nissan can do. I personally would love to see a GT3 street version, with a similar body treatment as the race car, a similar 1,300 kg curb weight, RWD, 2-seats, and a half-cage. Just copy the Porsche GT3 RS recipe and you are good to go!

Aside from a similar dashboard silhouette there is nothing much in common with the road car!

The Shiden MC/RT-16 is probably the most racecar looking racecar on the Super GT championship! It hits the scales at 1,150 kg…

…and is powered by a Toda Racing built 1UZ-FE generating 300 HP. A pretty wild beast!

By the time I looped around and did a second pass up the top of the pits the Zent Cerumo SC had appeared. Ex-F1 driver Toranosuke Takagi, (aka “The Japanese Tiger”) is the team’s manager.

With most of the cars and tools unloaded from the trucks it was the turn of wheels and tires that followed next and, as you would expect, a weekend of professional racing requires a serious amount of spares!

…but it wasn’t the only Porsche there as along side Super GT the Porsche Carrera Cup Japan championship is run, and on the Friday was their practice and qualify day.

Here is American driver Igor Sushko setting out from the pits in his OGT! Racing GT3. Igor is currently sitting in third position in the points ranking.

Next to the Porsche Cup pit area I spotted this limited edition 997 GT3 RS 4.0. I spent a good ten minutes drooling over this beast, it is actually the only one I have ever come across in Japan!

It was great to see that the ASL Garaya is still competing in Super GT! Too bad the road car version never took off as it was actually a fun little car.

Next to it was the other Autobacs sponsored car, the Team Aguri HSV010-GT which is driven by Ralph Firman and Takashi Kobayashi.

…they truly are stunning!

I loved every minute of those couple of hours spent surrounded by all these amazing Super GT cars.

It’s a championship that obviously needs more exposure here on Speedhunters, both the race coverage as well as the cars themselves. Hopefully you will like what I have planned. 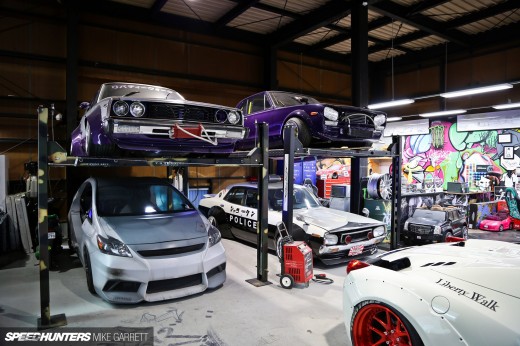 Let’s Cut Up Some Supercars:
Inside Liberty Walk

Please tell me I wasn't the only one that giggled after spotting the "cox" sticker on the RS 4.0

Is it just me or are the desktops not the right size?

@Gareth36 In what way? They work fine my side

@speedhunters_dino instead of 1920 x 1200 its coming up 256 x 170 (does it when i just click on the image and also when i save link as) i'll just try and goto another post and see if i can get others to work, never had a problem before though.

@Gareth36 You have to first click the desktop thumbnail, then click it again in the separate page that opens up.  Then you get the full sized image:)

@speedhunters_dino ok i have no idea whats going on i went back to the Jagermeister K3 and tried those ones worked fine, tried your 911 ones, no good so i'm thinking well it's something to to with your posts only but then i tried the kremer factory tour ones and they weren't working either..............shit just got your message......trying now........yep that works.....cheers, usually they pop straight up in HD when i click the thumbnail

Hi Dino, how are you?
Congratulations on your work is excellent. I never tire of looking!

Dino, Dino, Dino.....Thank you soooo much for this coverage.  I never get tired of being surprised by the quality of your work, this was a great coverage and hopefully as you said "Hopefully you will like what I have planned"  we'll be seeing more of this type of coverage.  Those HSV010-GT are truly stunning, sexy body lines and mean looking from every angle, HONDA BUILD THIS CAR........................please.

This is great! we barely can have info on JGTC around! Great work, Dino!

Try to snap (when/if able) the engines in those beasts sometimes, they're certainly a curious sight!

Those cars look soooo great!
This must be on tv worldwide!

Just wanted to say, these posts will never achieve the kind of likes, replies or clicks you get my doing more err... youthful parts of automotive but... without posts like these, purists that really appreciate Speedhunters for its origins will get lost.

With that said, great job (again) dear sir and keep up the good work.

GT500 is now an aerodynamic sport, after mirrors and "vortex" exhausts, what will they create?

And what's about collaboration with DTM? They really stopped?
I wanted to see M3 (and more) fighting with GTR, HSV and SC

@TheExoDozzMRT The collaboration is still there but not sure how they are moving forward with it....

@MickeSuperiorimports Thank you.  I think LOL

@mbretschneider Thanks and I will try.  Easier to get engine shots on qualify day

While im sure the GT500 class are the bread winners for this series, I sure do love the craziness of the GT300 class. So many different cars and powerplant configurations. Great post Dino.

haha!! come now.....! will we be seeing more JGTC in the future on Speedhunters??

Love the coverage.  Thanks Dino.
SuperGTが大好きなのに、とてもライブ見られないよ！

you use a lot of exclamation marks

@aussieANON I can use question mars if you prefer

@speedhunters_dino now that would just be silly... it'd sound like you weren't quite sure about anything you post

With more closer look, the HSV looks more like an Audi of a Super GT. Good looking monster.

@JoshChaney Thats exactly what it is,  they bought a DP chassis from Riley Technologies years ago.

Dino glad to see you giving those HSV some loving! In relation to your first article, I guess they gave Honda a waiver as they def needed them in the series. They already had a production ready car so it wasn't straying too much.

The larger wheels on the front of the SC is news to me. Very interesting.

ooo   its also interesting to see some of the aero differentiation between the HSV teams. Works guys getting their bits earlier as usual.

We desperately need coverage of Super GT in America! My roommate and I made several phone calls one day to Honda and eventually got someone from their American Motorsports department on the phone - they looked into some things and gave us a call back, only to report that they do not know of any form of Super GT coverage that is made available to the public in America.

You're lucky to even find a complete race on youtube, and even then, it is more than likely that it'll be a race from the JGTC days.

What I'm asking is, has Speedhunters ever considered launching a television channel? I think SPEED lacks diversity - I mean it's there, but 90% of air time seems to go to the NASCAR series.

I know that running a blog and a television show are two completely separate worlds, but perhaps you have the contacts and the means to do so later down the line.

I would love to see a true 24/7 race coverage channel that was centered around cars specifically, and covered and followed all of the major touring car series closely, especially Super GT!!!!!!

Anyway, thanks for the break from work.