Like a lot of things in Japan, VIP style probably makes little or no sense to the causal observer. But much like the unique culture of the country from which it originates from, bippu style is hardly for everyone. It has no real benefit when applied to a car; it doesn’t improve its performance, its handling nor does it make it more comfortable. Next to crazy kaido racers it probably represents the furthest extreme of the heated “function vs form” debate. Yet it continues to grow in popularity and has found various interpretations in other countries too. But why? Why would people render their cars close to undrivable?

I have given up attempting to explain it to those that don’t get it, it’s hard to justify something out of context, you either get it or you don’t. A VIP car, when witnessed up close on the streets of Japan simply makes sense. It may look absolutely stupid, but at the same time it’s just too cool.

Back when I visited Imamura-san at Bee Dragon a few months ago, he was kind enough to invite a couple of his customers along to his shop in Gifu-ken, owners of the two most extreme cars he has ever created – on top of his wild Infiniti Q45 of course. One was this candy red GRS181 Toyota Crown Athlete – a car that in some people’s opinion perfectly embodies the more modern take on VIP style…

…a mix of the old way of doing things, but with a more “sporty” approach. Imamura is considered quite the innovator in the scene, he has helped bippu style evolve but stay true to its essence which of course is to make a statement, to be seen and get a reaction from people.

In the pursuit of the ultimate aggressive stance most of his cars feature aggressively, yet smoothly widened fenders…

…necessary to contain the wild offset of the wheels. This Athlete is no different; it sits on 20-year old Intensive Hanku 2-piece split rims, the centers powder coated in a shade of dark grey, the lips of course polished. They measure 10.5Jx18″ at the front, with a -12 offset, while the rears are 12Jx18″ -20. Toyo T1Rs are fitted at each corner, or should I say stretched, 225/45ZR18 up front and 275/35ZR18 on the rears.

…but to make it sit just right, Imamura had to fit some of his special adjustable suspension arms.

The result is shorudazura perfection, or when the edge of the fender sits right up against the sidewall – or “shoulder” (shoruda when pronounced in Japanese) – of the tire.

While the rear sports some pretty extreme fitment…

…the front tires are given a little more space to breathe, or steer rather. Following this car around the streets of Gifu it became pretty obvious that there are no compromises when you go full out and do the VIP thing properly. The car bounces around, tramlines everywhere with plenty of rubbing and scratching noises as the driver tries to avoid “dangerous” obstacles like manhole covers. You either embrace it or you don’t – there is no in-between, especially if you want to do things the Bee Dragon way.

The exterior wears a full K-Break Platinum aero treatment comprising of a front bumper, side skirts…

…and rear bumper kit, all modified to fit around the custom Bee Dragon fenders that just like on all cars that Imamura builds, are actually fabricated out of steel, not FRP.

Coolest detail had to be the dry-carbon wrapped tail pipes, again adding to the sporty appearance of the conversion.

The owner of the car chose a factory Nissan Cube candy red color, a hue that would have made VIP guys back in the early nineties cringe, but something that now is very much accepted.

Another small detail was the integrated rear lip spoiler, like the fenders shaped out of steel and welded onto the trunk and sides of the rear.

The owner didn’t even want to open the hood as the 3GR 3L V6 that powers the car is completely standard, aside from the ridiculously loud Bee Dragon straight through and unsilenced exhaust system, a must on any self-respecting bippu ride! The interior was also pretty much all stock, aside from small add on accessories like A/C vent-mounted passenger-side cup holder…

Viewed in its natural habitat…

…on the streets of Japan this Crown Athlete can actually make sense. If VIP is all about showing off and making a statement then something like this will more than help you meet those goals. It’s as much part of Japan as an ice-cold glass of shochu and side plate of edamame; it can only be appreciated it by those that get it.

And guess what. The other ride that showed up was pretty awesome too, but you will have to wait a little longer to see it in all its low-riding glory.

So what do you guys think of VIP style? 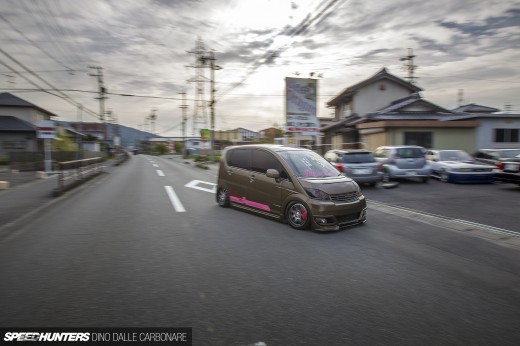 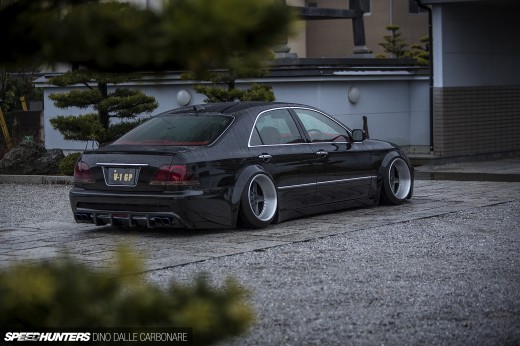 *cue the haters*
Very nice ride. I really like that you also spotlight vip cars. A very fascinating aspect of japanese car culture for me at least.

i love it. but u guys couldnt have put it better "You either embrace it or you don’t – there is no in-between"

Dino!  Can we have a desktop of that second image showing the mind blowing rear stance this beast is rocking?  Thanks!

What does that much camber do to the tyres? Can't be good.

Dino, how about the driving shot where you're looking from right rear!

i want this in the states

Just seen this in the latest issue of Japanese performance magazine! Too nice!

Thing about these rides is that being seen doesn't implement being "respected" as well.

That's my opinion but i still have some respect for the built itself. Nicely done!

i respect all of the work involved in building a car like this, that said i know what vip is but it still makes little or no sense to me

@Curlytop You are asking the wrong question for a car like this.

Awesome to see some less common rims. Although they would be a total waste of money, some big brakes would be sick. The stock rear just look minuscule behind the 18s.

only japan can pull this sorta style off perfectly!! gotta love the commitment that these guys have!
love it.

only japan can pull this sorta style off perfectly!! gotta love the commitment that these guys have!
love it.

"I have given up attempting to explain it to those that don’t get it" cue entire article trying to explain/justify vip style hahaha. no but really this is a cool ass car and a decently written article

looks awesome.....couldn't drive very far with it where I live. I like the white painted tire letters coming back, very popular in the 70's and 80's. Personally I prefer the less sporty VIP style.

Any info on that rear tailights? It look very awsome!

@psikyo Aside for some custom LED work they are stock

@Vilko Maybe bigger brakes are on the way, the car has just been finished

@bigmac94 Maybe because it doesn't!  But it looks cool so who cares LOL

@maxproof Well remember VIP came as a way to intimidate people, give them the assumption that you were part of some underground organisation;) At the beginning most people that did this were, now it's a style

@Hondafan You will find that's actually another car, a Crown Majesta - soon to be seen here too

@Curlytop I'm told they can easily get 10,000 km our of a set of rears.  That's more than good enough for most guys

It'd be cool to see

It'd be cool to see more interior work done to this car, I enjoy the creativity that is put into the exteriors and wild fitments but now I want to see what they can do to the interior of these rides.

What an amazing post that I have ever come through. It gives the information that I was really searching for the past week and I am really satisfied with this post. Need more like this. Thank you.

What an amazing post that I have ever come through. It gives the information that I was really searching for the past week and I am really satisfied with this post. Need more like this. Thank you.

Tummy Tuck is right. This is really amazing post.

Nice photography. the car in these photos is very nice and really like it. thanks for sharing it.

Love at first sight. The car is such an awesome. Really like your photo shoot. Thanks for sharing here.

Really nice cat. I just love it and also like your stuff here.

awesome snaps dude. Thanks for sharing. I really enjoyed.

A VIP car, when witnessed up close on the streets of Japan simply makes sense.

This post is so well written and it's easy to see you know what you're talking about.