Beginning a discussion about America’s most well-known street circuit is a lot like navigating it, it’s best to just dive right in blindly and, with any luck, you’ll arrive safely at the apex. Although still one of the toughest stops on many series’ tours, Long Beach has changed a lot since 1975, both the city itself and the course that dissects it.

In its early years the GP circuit was a course that put hair on driver’s chests, one that weaved through a hellishly seedy no-man’s land south of Los Angeles. Much like a human being, the track has settled down a bit with age, but in the process has drawn in a whole new demographic of racing fans and remains one of the more popular sporting events in all of Southern California.

In its live-fast-die-young phase from the mid-seventies through the mid-eighties the track was one of major elevation changes and dangerous blind corners. In 1976 the track hosted the first US Grand Prix West – a time when the US had not one, but two Grands Prix. The overall course layout remained the same from 1975 until 1981 with the exception of the start/finish being relocated from Shoreline drive to Ocean boulevard in 1978.

In this video from the Tyrell Cosworth 008 of Patrick Depailler you can get a good idea of just how hairy the original layout was. Keen drifting fans will recognize part of the course, the current turns nine and ten, used in Formula Drift. The distance from turn ten to the hairpin however was a very different landscape back then.

But then again the entire world was a different place in those days. It was a time I feel a bit ripped off for not being able to experience first-hand, one many consider the golden age of motorsport. In the original layout the hair pin very nearly made it all the way back to Ocean boulevard giving it a proper braking zone that demanded respect.

In 1982 the course layout underwent a major redesign with an entirely different west end that did away with the second “queen’s hairpin” and in its place a series of corners were installed, most notably the Michelob turn. The 7th running of the Formula 1 US GP West also saw the addition of a kink in the Shoreline drive straight which was later removed again in 1986.

When the start/finish moved to Ocean in 1978 the now famous Cook’s corner became turn one, a hard right-hander which exited onto the steep downhill slope of Linden avenue, a street I lived on for a short time. It’s this very turn hill that many Formula One fanatics most closely associate with the Long Beach circuit. To them, the track died with the loss of this section in 1983, coincidentally the last time F1 would run the venue.

1984 ushered in the CART era, and with it a series of shorter configurations. From ’84-98 the track changed layout three times, but the differences were really minor variations of the same theme.

The most interesting of which were the early designs which incorporated part of the Hyatt’s parking lot. It was here that Mario Andretti won the first CART Grand Prix of Long Beach, “double-clutching every shift”. 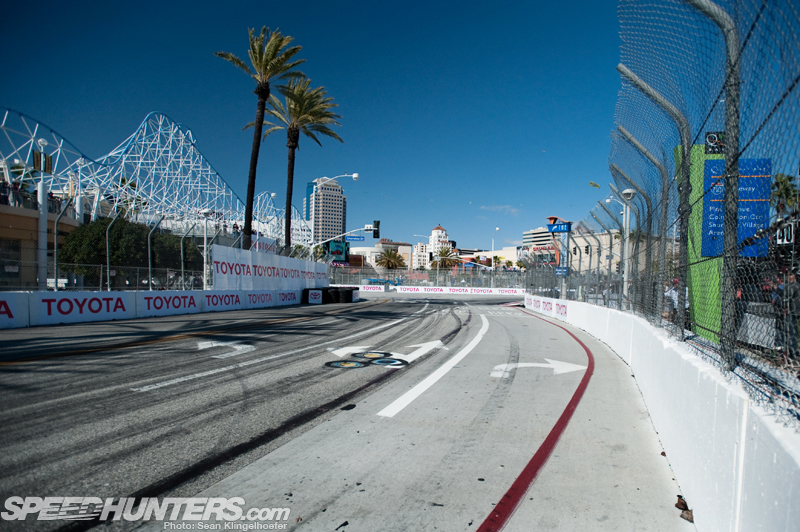 Today the track still bears a distant resemblance to its genesis. The current turn one is a far cry from the dramatic battles thrown into Cook’s, but the circuit is still one of the most perilous in North America. With the gentrification of the downtown area and the modernization of race cars, the course has been forced to change over the years. But change can be a good thing.

There are a few corners that have remained faithful to the original, including the high-speed start/finish which returned to Shoreline drive in ’83. Stretches like this gave way to the photo finish.

Another corner that is still very much the same is the nearly-impossible-to-navigate-left-hander from Shorline onto Pine in front of the Hyatt, currently known as turn six. Although it may seem straight forward, things do go wrong here.

As much as it is in our nature to resist it, change is a necessary part of life and with it often come good things. In 1999 the track under went yet another thorough remap and with it brought some of today’s most exciting sections.

Although the current turn one pales when compared to early versions, it is certainly a deceivingly difficult corner where bad things regularly happen. Stopping down from the highest speed section of the track often makes for some very exciting first lap incidents.

The extended west end also brought with it a current fan favorite, turns two and three, better known as “the fountain.” Lacking the extreme elevation changes of years gone by, the fountain adds a bit of action and unpredictability to the course. Not to mention some much needed drama.

One look at the corner explains its popularity, with cars regularly jumping the curbing through the hedges to short cut the apex this is a photographer’s dream. It’s also the most difficult corner to shoot due to the twenty-or-so photographers usually fighting over its three photo holes.

The current configuration was originally set in 2000 and officials don’t show any intent to change it soon. The most interesting addition in recent years wasn’t a  new stretch of track but rather a new type of motorsport altogether – Formula D. Drifting has brought some youth back to the course and each year Formula D’s attendance numbers improve. Maybe one day that allure will be great enough that we can see Formula D and Formula 1 on the same weekend on the streets of Long Beach. A boy can dream.

Formula 1 back in Long Beach? OKAY! I've never experienced it and really want to. If they do decide to come back to LB, I won't have to set plans for Texas.

I love in the PAtrick Depallier video starting around 1:53.  Check out the opposite lock he has as he hits the descent!   Reminds me of Gran Turismo 3 in the ZR-1 Corvette at the Seattle course.  Good times.

That first vid up there really shows how hairy those corners are.  One false move and bam!  Sick.

@bmw325_num99 The Seattle course is one of my all time faves. My friends and I used to do crazy battles in GT2 in Saleen SR widebody Mustangs... those were the days lol.

@sean klingelhoefer Definitely fun; American cars are great at the Seattle course.  Those and the modded Audi S4 I used.

@sean klingelhoefer so long beach is seattle in gt?

so if its not race weekend, the walls will be removed and common traffic will use the road?