The summer X Games has become the event of the summer to watch for a good portion of America’s youth. It’s every popular action sport packed into one weekend. There’s skateboarding, BMX, motocross, and the newest addition to the games, rally cross.

More specifically, it is held on the streets of downtown Los Angeles!

Upon entering the X Games, you’re greeted with a sensory overload. Advertisements are plastered all around, there are people all over (250,000 of them to be exact), and there’s a cacophony of noise around every corner. Imagine if you turned off your internet browser’s pop up blocker and let the internet run wild. In a nutshell, that’s the X Games experience.

The X Games brings together fans of all ages. I spotted many of these little bros as I made my way through the maze of security checkpoints.

This is the grand stand for the rally course. I was rather surprised by how small it was. Then I realized that it’s all about the TV coverage. Having spectators is just a small pot in a much bigger kitchen.

This is the view from the grandstand. You get to see the start line, the jump, a few corners and all that is flanked by the skyline of downtown Los Angeles.

Before crossing the street over to the factory backed side of the paddock, you first cross over the privateer side.

This is Stephen Verdier’s Subaru in the privateer side of the paddock. Even though he picked up a big sponsor, Disney and the “Kick Buttowski”, he was still considered a privateer as he did not have any factory backing.

Why the headlight stickers? Quite simply because race car.

I was quite surprised to see Matt Powers’ crew chief out at the X Games. He was helping out with Stephen Verdier’s car for the week of the X Games.

As I made my way across to the factory back teams, I spotted Ken Block scoping out his competitors as they practiced.

Though, Ken wasn’t the only one scoping out the competition….

Here’s Dave Mirra’s Subaru. One of the better looking cars on the field.

Right before qualifying started, I spotted the Skoda team with the engine out of the car.

The is the Rhys Millen Racing / Hyundai / Red Bull pit area felt the most comfortable as I’ve walked into it countless times while at Formula D.

It was nice to see that Rhys also brought out his Pikes Peak machine and Formula D drift Hyundai Genesis to display.

A Ford team member converses with a Subaru

…and the Subrau pit area. Dave Higgins car was getting some last minute checks before heading out.

The team Subaru even had their own grill master.

The great thing about being on TV schedule was that things had to happen quickly. The bad thing is that photographers, like myself, had to hustle real hard to get our shots in that short amount of time.

Good thing Rhys Millen went out just as I made my way into the media pit.

My media access only allowed me to a few places so a rule or two was broken for the sake of Speedhunting. This shot of the starting grid is one of those rules broken.

The course was mostly paved with the exception of a few corners which were covered with dirt.

The dirt promoted much sliding and made for some great racing.

You know its a bad sign when there’s a man in a racing suit, with his helmet off walking, slowly across the track…

…and when there are people sprinting onto the track with some rather concerned faces.

Media pits were very scarce for the RallyCross area. Actually, there was only one media pit throughout the whole course. This back section of the course was where that one media pit was located. It was the least exciting corner to be stationed at…

…but the some cars came out of the hairpin with massive slides.

Dave Mirra looking good coming out of the hair pin, though there was much sliding to be desired.

As I watched the battles unfold, it made sense why RallyX makes for such a great TV package. It’s fast, exciting, the racing is extremely close and the possibility of wrecks is very high. Especially when racing in such a tight street course.

In the first quarter finals match up, Dave Mirra and Dave Higgins was neck and neck with each other. Mirra tried to follow Higgins up the jump, but backed off at the last minute giving Higgins the win.

Ken Block was unable to finish as he ran into problems with this turbo charger. He tried to qualify for Saturday’s event but the car was running on no boost and three cylinders. He managed to qualify 10th despite all the problems. His team decided to pull out for the main event to focus on getting the car ready for tomorrow’s event.

Dave Higgins won the bronze medal match up with Tanner Foust which.

Liam Doran. Gronholm tired his best to best Liam, but he just could not keep up…

…which gave Liam the gold! It was great to see Liam cause a huge upset as he took the win. You can watch the final battle here.

Tomorrow should prove to be another exciting day as there will be 4 cars on course at the same time. 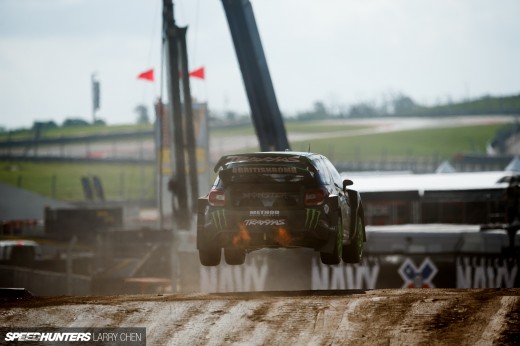 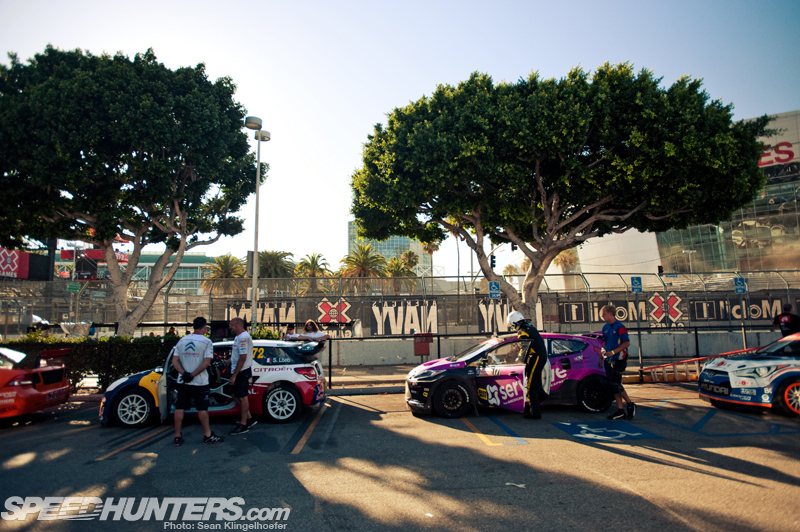 Block is feeling Carlos Sainz' pain with Ford cars... Always losing power before the finish of a real race. They do look nice in videos though.

Nice Citroen logo on that tubed race cart... Bet there's not a french part on it. Stupid logo slappers.

Liam is British not Irish.

One pic of the winning car? fail.

As expected the ESPN overage of its rally cross even was sub par, just as bad as that Jrod guy from Formula Drift. Pretty sad when the broadcaster cant pronounce the names of the drivers and cars. Even my mom knows its called Citroen not Citron

BakaYaru. If same setup as his other C4 then its got an XU7 Peugeot-Citroen Group engine and developed by Citroen Sport.

USA stop messing with Rallycross, you are destroying its good name, please go back to Just Turn Left and Just Go Straight races ..... and BakaYaru you must be a real noob at this, the C4 Rallycross was developed by Citroen Sport, you know does who made the Citroen C4 WRC and who are World Rally Champions...

x-games is quite amazing. And as always taking lots of photos @ SPEEDHUNTERS

man, love the coverage and photos.. i just can't get over the some of the posted comments. - its worth coming on this post just for the majority of those!