The Mayor of Atlanta, Georgia, waves the Tricolour and the 66th Grand Prix of Endurance bursts into life. There is a huge crowd of spectators, attracted no doubt by the prospect of the battles between the factory teams from Mercedes Benz, BMW, Porsche, Nissan and Toyota. Right from the off the race did not disappoint. Pole sitter, Bernd Schneider grabbed the lead but on the first visit to the Mulsanne Straight the Toyota GT-ONE of Martin Brundle blew past the German's AMG Mercedes. Five laps later the next GT-ONE passed the Silver Arrow, Thierry Boutsen replaying the straight line speed trick. Toyota wanted to win this race, who would stop them?

If I get to La Sarthe this year, it will be my 30th attendance at the Le Mans 24 Hours and I can safely say that 1998 was most unpredictable of them all. You would have searched in vain for a bookmaker to give any length of odds on both the Mercedes and BMW teams being out of the race within three hours of the start. Yet that was the case, first Schneider, then Bouchut suffered engine failure in their V8 Mercs, a pin in the power steering hydraulics system broke and so did the engine. Then both BMWs were suddenly withdrawn with unspecified "rear end vibrations". Later I was told that there was a problem with the wheel bearings and no one wanted the consequences of a catastrophic failure while flat out round the very high speed track. 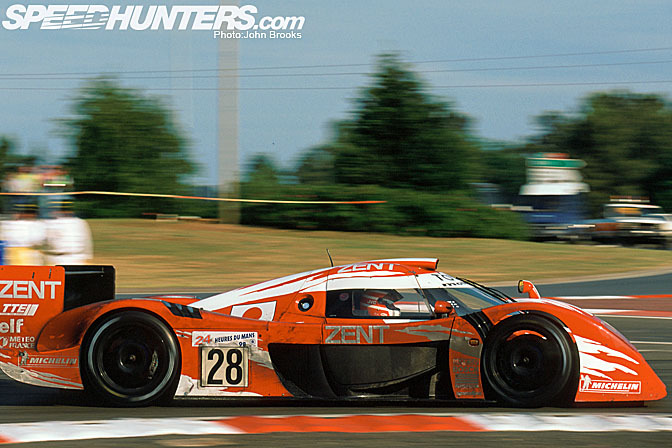 All of which seemed to play into TTE's hands and yet……………the gremlins struck #28. Helary lost the lead after a spin at Ford Chicane which cost four laps, then gearbox troubles cost another three laps in the pits, all of which pitched the car tumbling down to 26th place.

Toyota's standard was taken up by #29 which lead the race for several hours, harried by the Porsche 911 GT1 98 pair.

Which was just as well because #27 had persistent transmission problems which took 22 laps to resolve, dropping the all Japanese GT-ONE to the back of those still running. Two down and only a quarter of the race run.

Around midnight Toyota lost the lead, having gear clusters changed, so Porsche were ahead for the first time and two of the Nissans were also in front of the last contending Toyota. In an effort to get back on the leaderboard #28 with Martin Brundle at the wheel broke the lap record shortly before crashing the car into retirement.

Then it was the turn of Porsche to hit problems. I walked into their pit around dawn to find both the lead cars being worked on by the mechanics. Jorg Muller ran over a kerb and wrecked the flat bottom, which took 30 minutes to replace. The other 911 GT1 98 had cooling problems that took a similar time to rectify. All of which put the #29 back at the head of the pack.

For the next seven hours the lead went back and forth between the Porsches and the Toyota. It looked as if the GT-ONE would achieve the dream but with less than 90 minutes to go Boutsen stopped just after Arnage with terminal transmission failure and that was that. Toyota had led for 213 laps out of an eventual 351 but crucially the important last lap was the property of Porsche. #27 managed to finish 9th overall but for TTE all eyes were now on 1999.

Roll on 12 months and Toyota were back with another three car entry. There were many detail changes to the GT-ONEs, some coming from the experiences of 1998, some mandated by the rules changes as the GT1 class mutated into LMP GTP. ABS and traction control were out, the fuel tank was 10 litres smaller and the sequential gearchange was backed up with a manual gear lever system.

So a new paint job and some changes in the line up.

#1 was in the hands of Martin Brundle, Emmanuel Collard and Vincenzo Sospiri, instead of Eric Helary.

#2 now had the great Allan McNish, winner for Porsche in 1998, replacing Geoff Lees to partner Thierry Boutsen and Ralf Kelleners.

#3 was once again an all Japanese affair and the trio of drivers, Keiichi Tsuchiya, Toshio Suzuke and Ukyo Katayama were entrusted once again by Toyota.

The grid was still dominated by the horde of factory teams. Porsche had withdrawn from top level competition but Audi had stepped into the breach with not one, but two different projects. 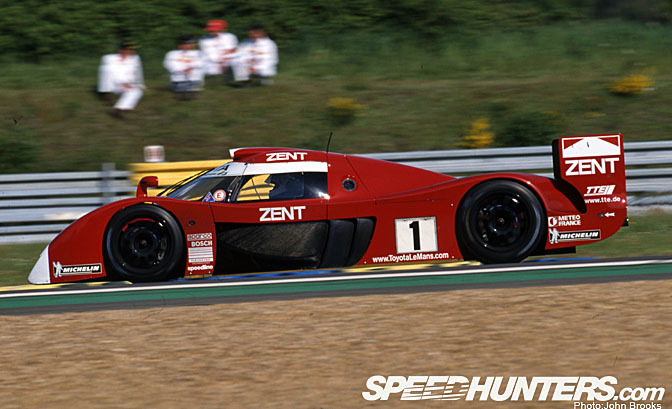 Normally the big story of Qualifying would have been the lock out on the front row by Toyota. However the first of three aerobatic displays from AMG Mercedes made the headlines as the boys in grey and blue scrambled around trying to explain away the problem.

Another Saturday in June, another Tricolour, another previously obscure foreign politician (this one Australian) waving it and another Le Mans 24 Hours was underway. As can be seen in the shot above the battle was distilled down to the pairs of Toyotas, Mercs and BMWs with David Brabham bravely sticking the Panoz where it no business being. Nissan had lost their way after a big crash for Eric Van de Poele and Audi were too conservative to take the fight to the others on outright speed, their time would come.

For the first two hours the battle raged for the lead raged between the Toyotas and the BMWs with the Mercedes in close attendance.

I have covered the race in previous features on the BMW V12 LMR so to read the report of who did what to whom and with what, read these three links:

The #3 Toyota ran to a more conservative pace so ended up on the fringe of the top ten, scrapping with the Audis, Nissans and the top privateer prototypes.

Then came the catastrophe that befell Peter Dumbreck and AMG Mercedes, horribly public but not entirely unexpected as it was the third time that the German cars had become airborne. YouTube had to upgrade their bandwidth to cope………

The speed was certainly with the GT-ONEs but once again there were issues with the transmission. These problems paled into insignificance when compared with that of Mercedes. The drivers now pushed very hard and this may have been a factor in the elimination of #1 and #2, both destroyed in huge accidents during the hours of darkness. Martin Brundle escaped unhurt but Thierry Boutsen's career ended as he sustained damage to his second vertebra.

So it all came down to #3 who put up a great fight in the final stages of the race but was just pipped at the post by the BMW.

In preparing this feature I called Allan McNish to see what he could tell me about the cars. He described the GT-ONE as "Very fast, edgy and difficult to drive right at the limit. The car was set up on the nose, very twitchy, like a good single seater."

" In 1998 the Porsche was much easier to drive and I knew it was bulletproof. There were regulation changes for '99 and that combined with the other top manufacturers competing meant that it was flat out all the time. Every lap was about extracting the maximum, getting the car to go as fast as it possibly could. Personally I found the car ugly but the angular style was dictated by aerodynamic requirements and it certainly was a trendsetter. Andre (de Courtanze) deserved a lot credit for being so single minded to designing the car and Norbert Kreyer's work on the engines was fantastic. The power was bloody impressive, I had 354kph out of it during Le Mans, it was a really drivable, fast V8 Turbo."

"The car had the speed to win, but it was a big problem only racing at Le Mans, getting the whole operation to the required level of sharpness. Look at Peugeot who have now learned this lesson. There was a very long first gear which made pit stops exits slowish and we were not as quick as say BMW when we were stopped. As a driver you would go absolutely flat out, especially through traffic, then the time gained would be lost in the pits, it puts tremendous pressure on you."

The GT-ONE did make one more appearance, later that summer at the Fuji 1000 kilometers but even then it managed to only finish second to a Nissan.

The project was over, Toyota had convinced themselves that Formula One would be the answer to all their problems, well we all know how that turned out, millions and millions of Yen later.

Certainly the record books do not give a true picture of the GT-ONE, this most exciting of cars, it had a feeling of danger, of edge, particularly with a Brundle or a McNish at the wheel. History will give it a kinder verdict than the contemporary media and that in itself is a kind of victory. We can't all be Porsche 917s, some of us have to fail for others to win.

That was a good article. GT-ONE has always been one of my childhood dreams, next to the R390 of course

I have been reading all your retrospective articles and like this one I can't find anyone of them I don't like!

Many thanks for sharing these great stories that people like me were far too young to remember!

While I hate the way the rules were altered when they had such a good thing going, it's unlikely we wouldn't of seen these amazing machines appear. (Same story with Group C and the 3.5 litre cars I suppose!)

I wonder if Toyota's supposed return to Le Mans will be with the TS030...If it is I hope it is as exciting as it's 2 immediate predecessors!

I just hope you have more stories in the pipeline to share with us.

Good Read, I had always wondered what was the story behing these cars. Which bring me to the next question what happened to the Nissan R390's ? and the street version they made of them?

Great stuff Brooksie, I think this was the 1st year that Eurosport showed most of it live too, you really didnt know what was going to happen next!

It's a shame that the car ran so few races. It would have been nice to see the car in the ALMS or at least one more time at Le Mans.

Maybe if the ACO can get the rules to a point where things like hybrids and KERS systems are more readily accepted, Toyota will join the fray again.

Nice. Now I know the story behind the crazy car I've been driving in Gran Turismo 2. I never won the one with the white front. I only had the striped-looking one and the so-called "Road Version".

I know I'm being bad but I always visit and speedhunters is on my rss list.

I had the third picture from the bottom that you took of the GT-One as my computer desktop when I was in highschool. My god, how in the hell did I get so damn old?

Great read. I've read all of your articles on these GT1/GTP racers and now there's only one other that sticks out in my mind I've never really known the story behind: Panoz. Being the only real FR GT1/GTP competitor of that era (as far as I know) and knowing it's from Georgia and uses Ford motors, they seem to be a real odd-ball amongst all the European & Japanese racers. Perhaps this is why the car interests me so much.

awesome feature on an awesome car

Dear John Brooks, its amazing how much you know about Le Mans. Each article you right is just mesmerizing to read! Any chance your gonna write about the GTS/GT2 class way back then?

Hear! Hear! I second the call for a Mercedes CLR retrospective.