SHARE Behind The Scenes>> Nish Motorsports: The Pursuit Of 400 Mph

OK, OK. I left you all hanging on with the Nish Motorsports Royal Purple Streamliner speeding away from me in the push truck on its way down the Long Course at Bonneville Speedway. So what happened next?  In a word, loads.

Well, to describe the next three days as a rollercoaster ride would be something of an understatement.

No sooner had the purple rocket vanished out of sight, Mike Nish cut the engine and ended the run. The gauges showed that the exhaust temperature was climbing rapidly, so the first law of high speed runs kicked in. If you encounter a problem, abort the run and fix the problem. It will always be the optimum solution in the long term. Even cutting out as early as he did, Mike was travelling at 216.700mph at the first Quarter.

So it was time to recover the Streamliner, scratch the head to stimulate the little grey cells and figure out how to fix the problem. As soon as the car was back under canvas Terry Nish and Cec McCray, team principal and crew chief respectively, quickly hit on an idea on what to do to cure the issue. So it would be back for another run on Tuesday.

7.30am the next morning and preparations are well underway for the next attempt to pass the 377mph mark, the team's initial target on their way to the Holy Grail of 425mph. Per Ardua, Ad Astra………………….

Or not…………..once again the 'chute is deployed early as there are some engine issues that need attention.

Mike and the car are quickly recovered and the team gets down to the job of getting back on the Salt Flats as soon as possible.

Once back at base camp the engine glitch is located and fixed but then more trouble is found. A 50 cent piece in the transmission gives the team cause for concern so running is abandoned for the day while the whole unit is changed. The SpeedHunters crew backs off and leaves the guys in peace. So we will all be back tomorrow.

Wednesday dawns and up to the head of the queue goes the Royal Purple Streamliner once again. This time the run is much better, with the car being visibly faster. But the chute is deployed early, why? Another mechanical issue? Nope. Mike puts his hands up and admits a mistake. He mistook the mile markers and was one out. However the speed of the car lifts the whole team. Even with the little problem there is a 3 mile speed of 371.281mph, now that's more like it.

Once again the car is recovered from the Salt…………….now the time approaches for a record attempt.

After two days of problems, there is a sense in the team that things are finally going their way, so everyone gets on with their alloted tasks as the focus shifts to getting the second run perfect.

After the usual period of hurry up and wait, the text came through from our spotters (thanks Rachel and Rod) "At start line. We could go next"…………….then the radios cackle and we are game on……………..sooner than can be possible the purple streak arrives over the horizon and it is clear that this is going to FAST! I struggle to keep the target in view and Mike goes past absolutely Harry Flatters………………..then the word comes through 385.262mph, they have beaten their record.

We jump in the car and hare off down the track to get to the final destination of the Streamliner. Mike looks as if he had just taken a Sunday drive…………then the really big news emerges……the exit speed is an incredible 394.537mph, the Royal Purple Streamliner was pulling like a freight train even at the end of its run………….400mph is surely in reach.

Mike jokes with me that he failed to give me a birthday present as planned with 400mph but I will happlily settle for the 394…………he figures that time and speed were lost in the first mile of the track with traction issues. Everyone is suddenly elated at this stunning speed, it makes all the hard work and hours spent back at the workshop and on the hot salt flats worthwhile.

Mike and Cec consider what comes next, an early morning run in cool air and that elusive 400mph.

So it's on the trailer again but this time to the Impound Lot as specified in the rules, so that a record attempt can be made in the morning………….there is a keen sense of anticipation in the air.

Up with the larks again and soon it is time for the return run. However things come unstuck almost as soon as the car hits the track.

As Nish Motorsports put it themselves:

"The morning air and salt conditions were very good for the return run and Nish Motorsports was in high hopes of a 400 MPH timing slip.  The Royal Purple Streamliner would need to approximately run a 325 MPH speed between the 2 Mile  and 2 1/4 in order to obtain a measured mile speed in excess of 400 Miles Per Hour.  Unfortunately, a lower end failure in the engine prevented the car from running past the 2 Mile.  The ProLogger Data Acquisition information confirmed that the Streamliner was well on it's way to the 400 MPH Run.  The 2 mile Speed was approximately 317 MPH.

Car Owner, Terry Nish said, "that was the run we were looking for and the Streamliner was definitely on a mission."

So the dream has to be postponed, maybe until the FIA Meeting in September.

I have to say that it was a privilege to be even a peripheral part of this record attempt. Despite the problems that were thrown at the team they put up with me without complaint. The expression grace under pressure comes to mind.

I fancy that I know a bit about racing and have seen many teams in all forms of competition, Nish Motorsports are the real deal. The same could be said about Bonneville, there is nothing like it in motorsport, it is one of the must do events. Go! 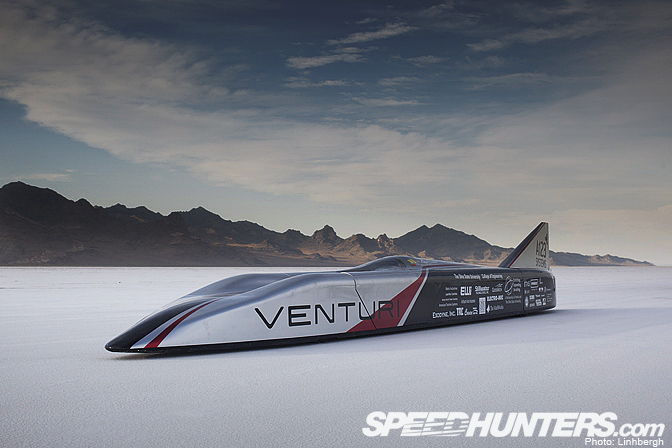 See you on the salt

Yeah, but nothing beats the Thrust SSC!!!:)))) Isn't there anyone out there considering, willing and capable of beatting THAT record? I think that as far as land speed record racing goes, those guys are the Gods for now...

Nevertheless, Team Nish Motorsports is surelly amazing for doing what they are doing. Taking a vehicle to such crazy speeds is no easy feat. Some words to describe Team Nish? OUTSTANDING, AMAZING!!!

Bonneville sure is the place to be if you're a speed-freack and it seems to me that it's the natural environment of Speedhunters:)))

Thanks John, for a wonderful job of sharring the experience with us! Wonderfull !!

John, excellent post bro. The write up was very informative and compliment the photography really well. It gives you an accurate sense of what its like to be at Bonneville and follow a team bent on breaking a record. Cheers. Save the Salt!

Great photos, go Nish! This has been an awesome group to follow in their pursuit of 400mph.

Great work guys, keep it up and get that record in September.

thanks for the pictures and the nice words.

Well what can I say, We did not reach our goal but that is why they are RECORDS some will be broke and some will never be touched. We will be back to try again, I just want to thank SPEEDHUNTERS.COM for all there hard work on ths salt and being the first media group to ever ride in the push vehicle off the starting line, THAT just doesn't happen it was an honer... By the way can you breath yet?? I hope to see you all again until then BLOODY FAIRWELL .....

I spoke for all of my colleagues from SpeedHunters who were on the salt, it was an honour indeed to have been a very small part of the project..............I can say that I would like to come back to Bonneville one day, it is like nothing else on earth.

All of us here at SpeedHunters and our readers will be waiting to hear about the next attempt on the Summers' Brothers record.............

I will try to keep you posted as much as possible, Hope to see you soon. By the way GREAT PICS.