It was an early rise for me this Sunday morning as I packed up the car and headed straight for Tsukuba circuit. After the seamlessly non-stop rain that has plagued Japan over the last two weeks (well it is the rainy season after all) the weather miraculously changed giving us clear blue skies all day. I knew I was going to get very sun burned (and I did!) but as soon as I set foot in the paddock at Tsukuba I really didn't care as I was greeted with an impressive assortment of motoring jewels.

The idea of the InterClub Historic Car Race is to bring together numerous car clubs, and have their members participate in a series of race categories. There are a total of 56 car clubs that take part and from what I saw today it is a great way to bring enthusiasts together in a relaxed and friendly atmosphere.

The assortment of metal was astounding with cars from the 60's all the way to the 90's being pitched against each other in various categories.

Take a look at this Alfa Romeo GTV stripped of its chrome bumpers and fitted with a carbon hood. The Alfa GT club of Japan was well represented at the event, so much so that they had a race all for themselves.

On top of all the road going classics there were some other more interesting and far rarer machines. Can anyone recognize the car above? And check out that Caterham all crossed up in front…took him a couple of fishtails to straighten up.

This is a 1967 Brabham 21 F1 car, one of a few vintage F1 racers at Tsukuba today. To be able to participate the cars must adhere to the noise restrictions, hence the little silencer at the end of the exhaust.

What would an historic gathering like this be without the good old Mini.

They had their own class and 5-lap race and it was great to see how some owners took the racing very seriously as well as the car's preparation. I spotted a few with carbon body panels!

On the more modern side of things the Lotus Elise/Exige club was well represented with this colorful line-up.

The organizers teamed up with Audi Japan who came to Tsukuba with a pair of R8s and an RS6. Potential customers were invited to take a closer look at the cars and try the interiors on for size, while the luckier ones even got to rev the silky-smooth 4.2L V8. I think the R8 is such a cool car it deserves a more in-depth feature, what do you guys think?

Now this was one of the cleanest engines I saw today. Check out the careful attention to detail, and the massive fuel delivery pipe (or tank rather!) 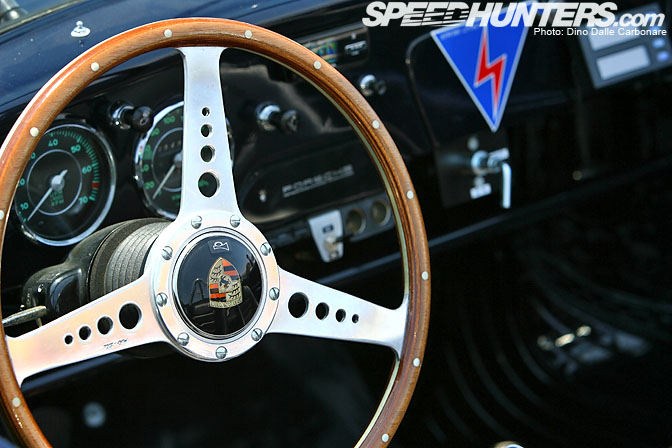 What feature better simbolizes classic sports cars than a wooden steering wheel. Who knows what Porsche this interior belongs to?

During the MG race this number 93 car grabbed my attention. The driver was particularly good, handling his little British classic with a very old school style of driving. He would enter the main in-field hairpin heavy on the brakes and turn in sharply. The car would slowly drift wide with silly amounts of roll at which point the driver would get back on the power and the car would begin to straighten out mid corner. Looked brilliant!

Spotted this rare Alfa Romeo Junior Z as it was heading home early from the event. I have only ever seen a handful of these Zagato designed cars, I always thought of it as a 70's interpretation of the TZ. There is tons more action coming from the InterClub Historic Car Race, including those cool 60's F1 cars!

wow, so cool, wish i was there, or rather i wish i lived in japan!! they take their cars seriously, and the attention to detail is second to none.

a speedster cockpit looks different (less gauges, more round, etc ) i think it's some kind of other 356 cockpit. but somehow the centerbar and that door, that looks like a glovebox don't fit to this guess.

Wow!love that porche on the opening shot.....

Man I love this kind of coverage!!! Thank you so much for sharing with us!

Ah, the Natty Dread spotted in the wild, nice one Dino

Yeah Dino i love the R8's aswell, feature would be nice, just love those lights so neat, its like the whole future but in a light design.

That's 356B for sure (maybe "C", but that one hard to find even in museums). Steering wheel definitely not standard and leather cover was removed from dashboard cover. Judging by light distridution it's open car, so RSphil is right - it is "Speedster".

i also am having trouble identifying the porsche dashboard... the cover buttons are telling me speedster, but the guage arrangement tells me cabriolet. my guess will be 356B Cabrio, but i'm probably wrong

I think the silver sportcars is a Lola T70. Though the back end looks a bit different, guess it might depend on what's powering it + they've been making official/unofficial replicas of it for ages, so sure some bits will differ. Don't think it's a 917. The picture third picture down I think has the same car parked in it(silver with red stripe down the middle, at the end of the row facing the camera), and it definitely looks more Lola than Porsche with the side intakes etc. I'm not 100% sure though. Any more pictures of it?

Lola T70 or poss Chevron, 99% sure T70. 356 Porsche interior, however I'm pretty sure that Brabham is a F2 or FJ car, as the '67 F1 car (driven to the WDC by Denny Hulme) looks quite different. Great coverage though.

http://www.diamondcars.de/1-8_Porsche_356A__Speedster_Diamond_Cars_04.JPG <-- speedster. looks definitly different. at least it's some kind of 356, that is quite sure.

awesome footage! is the porsche in the opening pic the latest 993 project from rauh-welt previewed on their blog a few weeks earlier? ah, and the silver car is a Chevron B16, they are all over the place at historic sportscar races back here in Europe

imo however a bright red suits the car even more. really looking forward to part two!!

I initially thought Lola T-70... but the side intakes are completely different.

ahh, I didn't read the last post! GinettaBarchetta beat me to it... however, the link backs up our claim.

picture 1 for desktop anyone?

picture 1 for desktop anyone?

WoW I love the first photo of the Rauh Welt porsche. Definitely one of my favorite cars in the world. Looks like it was an amazing event.

There were several "Speedsters". The picture you found shows 356A model. But later 356B had exactly the same dashboard, only covered by leather on top. And all open 356 Porsches were called "Speedster", except some racing models, but that's another story.

Got to love the Junior Z, a friend of mine owns one exactly the same (his is a bit tidier tho). imo you should make a desktop of the first image. Over all great photos!

Got to love the Junior Z, a friend of mine owns one exactly the same (his is a bit tidier tho). imo you should make a desktop of the first image. Over all great photos!

Haha, but the other cars looks good as well. Keep those updates coming....

Love those Alfas! Any more pics of the white one with "tricolore" racing stripes in the 2nd pic? Also Love the "high-visibility" taillight on the Brabham; looks like something you'd see on a vintage motorcycle. More F1 pics please! Just got to see a '50s Cooper F1 car this weekend at a show. The sound it made was amazing!

I was with Dino on Sunday and I can confirm a few things. The Porsche is a speedster 356B. At least that's what the broken Japanese in me was telling me. I was one of the "lucky ones" to be handed the R8 key and I can say after a few decent prods, the Audi R8 revs to 7k instantly - I swear that R8 flywheel is made of paper.

The sleek looking silver shape behind the sideways Caterham 7 is indeed a Chevron ( although I'm not too familiar with them ) and the RAUH WELT cars really did look as massively gangster as they went. Matte Black never looked better and reminded me of Condor Man for some reason...

I think i measured 25cms of over fender over each rear wheel...

More pics (wallpaper!!) of that matte black Natty Dread Porsche if you please.

@ Adam - If all the chasing Porsche's (chasing the slant-nose) were Rauh Welt's... it would be too much awesome for the big screen to contain. Thanks for getting the Condor Man theme song stuck in my head!

@ Alfonzo - Even cooler that Condorman is in German this time around.

"If only I vaz driving ze Rauh Welt Porsche, yah, zen I wouldn't be plunging to my death!"

@ Adam - You're right. Waay better in German! Apropos with the Porsches and whatnot.

Let us know if you guys captured any video footage of this event. I would love to get a sense of the sights, sounds and sme... I guess sniffing race fuel while watching the video will have to do.

does anyone know the sticker in pic #4

I remember a discussion regarding the Alfa Romeo "Serpent". Here's a link to the article.

i would like some wallpaper of RAUH WELL cars