Some ideas look really good on paper, it's the real world that causes the problems. Back in 1995 Toyota decided to make a car for the GT500 class of the Japanese GT Championship. They took the JZA80 as the starting point, threw out the stock block twin turbo and installed a 2.2 litre 4 cylinder that had been developed by All American Racing for IMSA. It was much lighter and needed little or no money to be spent. So far so good but then some bright spark said "Let's go to Le Mans!"

OK they were not going for an attempt on an outright win but the performance of the Supra was broadly in line with their Japanese opposition, the Honda NSX and the Nissan Skyline GT-R, so they would be competitive, sure thing. Only in the time since the 1994 Le Mans 24 Hours, the premier GT class had been revolutionised with the arrival of the McLaren F1 GTR and the Ferrari F40 GT-E. The Japanese teams were at a huge disadvantage to the Woking built machines and Maranello's old thoroughbreds.

The car was entered at Le Mans under the Sard team banner but it was very much a factory project with hired guns, Mauro Martini, Jeff Krosnoff and Marco Apicella retained to drive it. Four chassis were built, complete with cabon fibre and kevlar bodywork, weighing in at 1,245 kilos. There was an X-Trac six speed sequential gearbox, pushing around 650bhp to the 18 inch wheels. The suspension was a development of the Group C TS010's double wishbone arrangement. Tyres were from Dunlop and the brakes were carbon.

As an official factory entry the car did not have to turn up for the official Test at the end of April. This turned out to be a mistake as the drivers really struggled when the car took to the circuit for the traditional Wednesday and Thursday evening practice sessions. The brakes were giving all manner of issues and coupled with the sudden power delivery of the engine made for an uncomfortable ride, the consequence of this being several spins. After much effort a time of 4:10.36 was achieved and that was good enough for 30th place. The best Nissan managed to beat that by a second and the Honda NSX was mid way between the two. So far so good in the "Japanese " class however the best time in the GT1 class, the Ferrari F40, was over 15 seconds quicker than the Supra and all of the McLarens, lacking the magic turbo boost button of the Italians, were two or three seconds down on that.

The 1995 edition of Les Vingt Quatre Heures du Mans will be remembered by those who were there as a cold, wet, miserable, if exciting, race. For the Supra there was steady progress up the leader board to 12th at the fifth hour of the race but then the dramas started in earnest. About an hour was lost in the pits as the team had to change the gearbox. There were persistent problems with the flat floor under the car and a further 30 minutes went by while a radiator was replaced. The Stewards evenually agreed to the removal of the floor on safety grounds but the cockpit was severly overheating making anything but a single stint for the drivers an impossiblity. The laps and the hours rolled on and then it was time to take the chequered flag. 14th place overall was some reward for all the efforts.

A year later and the Supra was back. It looked broadly similar but there were a whole raft of changes under the skin. The most obvious change was a revised rear wing which together with a new air ducts would hopefully cure the instability at over 250kph and provide better cockpit ventilation. The centre of gravity had been lowered and the front spoiler was revised to give more downforce. There was now power steering, new Kayaba dampers and a factory turbo installation, and a trip to Weight Watchers had managed a 50 kilo reduction.

There were three new drivers, an all Japanese crew led by 1995 winner, Masanori Sekiya. Alongside him would be Hidetoshi Mitsusada and Masami Kagayama, whose brother was driving for Nissan.

The changes had a positive effect with the car easier to drive and the net result was a 4:06.532. However the rest of the grid had speeded up and the time translated to 36th place overall. 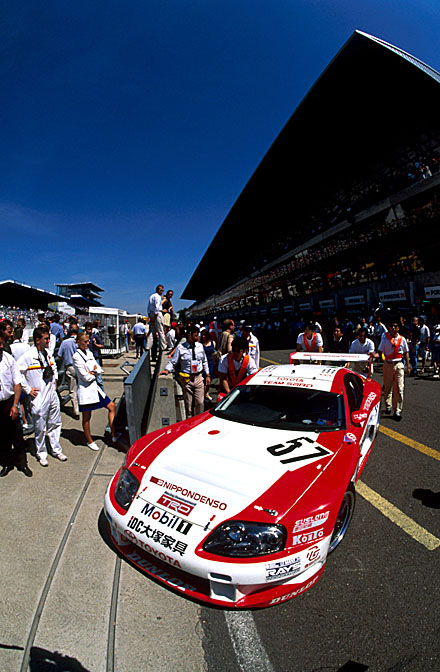 The race was once again unkind to the Supra. Problems with the flat floor surfaced once again and there were also unscheduled stops to fix the exhaust system and issues with the brakes.

The various problems meant that the Toyota could not fulfil its potential and with lap times around 10 seconds off the limit the car ran at around 25th place.

It was an anonymous performance from the Supra team. Mitsusada had two accidents, the second of which ended the car's participation in the race. This happened around 8 o'clock on Sunday when the Supra was running 23rd overall but some 59 laps down on the leader.

The two appearances of the Supra GT LM at La Sarthe were not representative of the Toyota brand and plans were being made to put the corporation right back at the top, gunning for a win.

Sometimes, You Just Have To Shoot A Supra

i'm surprised someone hasn't shouted out "wallpaper!" yet hahaha

Wallpaper!! LOL. Great pics and history of the car at Le Mans.

I was already wondering why the Supra got so little exposure in this Toyota month, the FD got it's fair share last month.

Beautiful Supra... didn't know this is how the TS020 came to be; very interesting!

Thanks for this superb lesson of history doctor Brooks.

Japan cars and teams are a milestone in the " exotic " history of the Le Mans 24H.

Most of the time the cars were simply superb like this one , but the results did rarely honoured this valuables efforts ( and Toyota more than deserved !).

cool write up, thanks!!!

Too bad the R33 was not closer on the pictures taken from the beginning des Hunaudières...It would have been a perfect picture!!!!

Thanks for the write up!! There isnt much info about the Japanese manufacturers in the GT classes at LM in the 90s so this is most welcomed. Would you be able to do a similar article on the R33 Skyline GTR LM please??

great writeup, thanks for the history

Any of the top4 as a wallpaper would be awesome!

Awesome write-up, i didn't even know that toyota sent a supra to tackle LeMans

I love these posts Mr. Brooks.

When you look at the second variation and it's aero, it's not hard to see where the Top Secret GT300 widebody got it's inspiration from.

(So hopefully one for TS020 will be up next?

Another fine write-up by Mr. Brooks! Thanks for the trip through the TMS wayback machine! Can't wait for your next installment - bring it on!

Excellent story and fantastic pics !!! The best bodykit in a Supra i believe ... keep them coming John !!!

@Bendoe I assume you are talking about picture 7..........it is actually taken on the run down to Indianapolis after the second kink. at the point where Dumbrek's Merc flew..........it is now the fastest part of the track.

@Richo we will have a look at the Skyline and NSX efforts at Le Mans some time in the future..........

too bad it didnt perform as expected.

and whats up with the 3rd pic? what happened right there. looks like the supra is being toasted.

the 1995 Le Mans 24 Hours was run in foul conditions and most of the cars were covered with a mix of water, oil, rubber and dust.........which dried on to form another coat on the car..........most cars had to have their numbers cleaned at each pit stop.

hehe. i though it had some blow-out or some sort when i first saw it.

What a beautiful bit of history. That car is greatly responsible for the JZA80 in my own garage.

As raced in the JGTC wasn't the engine a 3SGTE derivative?