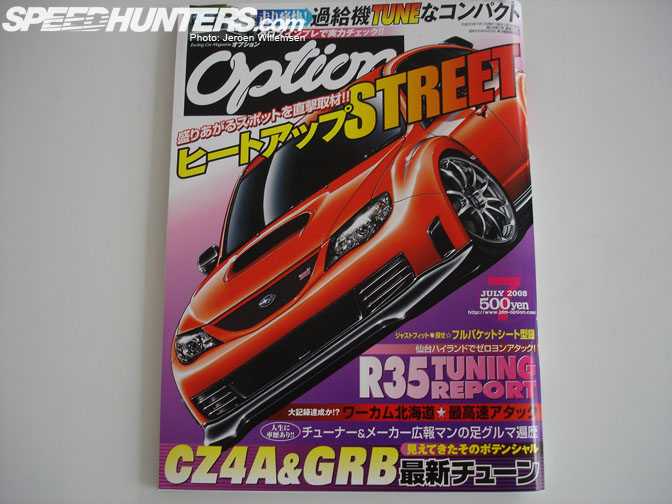 As I am a JDM car enthusiast, it's almost mandatory for me to buy Japanese magazines so I can see what the new trends are and who's producing the best parts. Unfortunately for me there are no shops in Holland that stock Japanese magazines. Luckily for me I have some friends that live in Japan and they are willing to send me some of the mags I like to look at.

One of the mags I like is the Option, there are several editions but let's focus on this one for now. The Option is a very big magazine compared to other European or US magazines, it has almost 300 pages. They feature a lot of different stuff, from car comparisons, speed trials to street racing.

Here is some of the street racing, this particular piece was about European cars like the BMW and Volkswagen Golf.

This is one of my favorite features, the speed trials. It's all about who's the fastest, this time they put the Phoenix Power R32 against the ASI Bentley Continental. As you can see in the picture, the R32 reached a top speed of 326.04km/h. The car is powered by RB26 with a T88 that gives the car 900ps!!!

Here's another cool item, they make pictures of the different cars that roam the streets of Tokyo. The winner is the R34 Z-tune you see on the left in the bottom.

Every car magazine has to have a news section, here we see the Lexus LS tuned by Tom's, they offer a complete list of parts and price list and a small review of the car itself.

This is the car comparison, it's between the new EVO X and the Impreza GRB built by HKS Kansai. But it's more, they show the reader every new part that is available from the popular tuners like Car Station March, Original Runduce, ARC and Autoproduce Boss.

Jeoen, I've got myself a few issues of Hyper Rev and a few option mags too. They're great "reads" in that I can lust after the pictures.

I wish I could read Japanese I must admit.

What's the differece between Option and Option 2?

Are you kidding? I've been reading Japanese mags for at least 8-9 years now....

The main differences between Option and Option 2 are:

I have tons and tons of JDM magazines/dvd's purchased both here and in japan. Its my life!

Hey where do they do the speed trials now that Yatabe is dead?

No, I wasn't kidding and I could care less how long Alex has been reading JDM mags. I only collect the car books such as Hyper Rev, VTEC Sports. and the RevSpeed mags, All I wanted to know was the difference between the two so thanks.

BTW, does anyone know if it's possible to get Option/Option 2 back issues like from 3 years ago?

....and to answer to ITRbroham; my ''are you kidding?'' answer was not directed to you. It was directed to Jeroen.

Don't be hating if I speak fluent Japanese, and I actually READ Japanese mags....(unlike a lot of folks that only look up pics, you know who you are).....I just mentioned it because Jeroen asked: ''Do you guys read Japanese magazine.'' and so I answered.....so, don't be hating....

Hey the pics are just as good! haha I'm still learning my japanese but the photos are fine for now!

Yea, thanks to auto-otaku we all know Yatabe is dead RIP, but where did they record those top speeds? Was that on the wangan? The pics look like a race track.

I was kidding when I said wangan. (but I'm sure few folks do tune on the wangan).

I know Smoky Nagata brought his V12 Supra to Nardo' (South Italy) to test it on the round circuit and tried to break into the 400 kph. (I think it ''only'' reached 347 or something)...

Another thing. Someone posted: ''hey guys don't be hating because Im a douche''.....maybe to you, whoever you are...like to post this kind of crap....hacking my account, and add things on my behalf....that is fucking stupid....I really have no word to comment on you action....go take a walk instead.