It's no secret that I love Lexus brand vehicles. So of course I was excited when I heard that Discount Tire Direct and Falken Tire would be working together to campaign a Lexus IS350 in the Formula Drift Series.

When I first saw the mockups of the graphic scheme (it was shown to me by a Falken employee before the car had its graphics applied), I wasn't too thrilled to be honest. I dislike the arch looking graphic on the side of the car, it doesn't do any justice to the car's naturally beautiful body lines. Oh well, without going into too many more details, I was hoping for something that looked a bit more JGTC style, or WRC, or even BTCC. However, this graphic scheme seemed to grow on me over the past year that Hiro's been driving the car. I don't know… maybe it's just because the idea of seeing an IS350 in mid-drift is so cool to me?

As much as hardcore Toyota enthusiasts like Hiro and I love 2JZGTE engines, Hiro admits, "It's just kinda heavy up front. You know, the 2J has a big iron block, so it was really hard to set up the suspension for drifting. With so much weight up front, it's easy for the car to spin, and it was really unpredictable in the transitions." Hiro continued to explain, "when I tried to flick the car really hard, I didn't have enough control with it… and when the car was near a full lock situation, the front was so heavy, it just couldn't stay at full lock… it just spun out. And I was even running 24.0kg front springs!!!" (This is super stiff! In comparison, my own AE86 has 8.0kg front springs, and some people think that is stiff!)

Hasselgren's proposed solution to Hiro's heavy iron block problem was to swap out the motor for a custom Hasselgren-built V8 engine. Since the Hasselgren V8 has an aluminum block, it helped the car's weight distribution. Even though Hiro was reluctant to get rid of his beloved 650hp 2JZGTE, Kevin Chen from Hasselgren promised, "Our V8 will give you 700 horsepower… No problem… No problem!"

At the start of the 2008 Formula D season, Hasselgren wasn't finished building up Hiro's V8 race engine, so they elected to swap in a temporary Hasselgren V8. Hiro told me that they didn't even dyno the temporary V8 engine in the car, but he thought it felt like it had around 450 or 500 horsepower. "Now that it has the lighter aluminum V8 engine," Hiro added, "it takes more angle and is more forgiving in the transitions! It's a little easier to drive now!"

Even though the IS350 only had the temporary 450hp V8 installed during the Road Atlanta event, Hiro's car sounded sooo different from before! The IS350 passed me as I was shooting trackside, and as it passed, I was amazed because I thought it sounded almost like JR Gittin's Mustang… but not as loud! Just imagine what Hiro's IS350 is gonna sound like once it has the real 700 horsepower Hasselgren V8 in it… that thing's going to sound ridiculously loud!

I can't wait to see all the smoke… 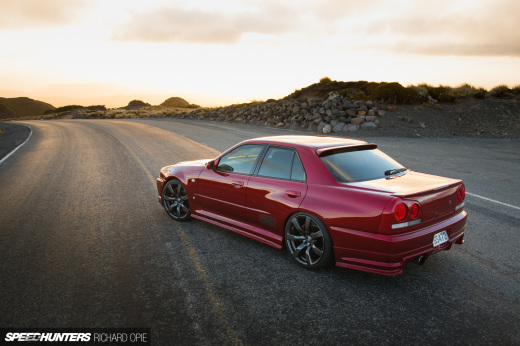 When Supra Met Skyline: A Match Made In NZ

Hasselgren built up an AE86 that was featured in a mag awhile ago. It had a gorgeous engine in it with a price tag to match. Where you at Antonio? Every man needs a $50,000 4AG in their lives.

I want to see (and hear) this car in HD glory sometime!

Yeah the AE86 that was built by Kevin Chen at Hasselgren is sitting at Impact Engineering right now (keep an eye out on their shop feature, coming soon)... hm, $50,000 4AG sounds like a good idea! I'm gonna start saving my pennies... haha

This article is Jbrad approved for awesomeness.

oh yes, the collaboration of Falken Tire and Discount Tire is so huge this year.

Formula D Englishtown and the rest of the season is gonna be crazy for sure !!!

It would be awesome to outfit this thing as a bippu drift car.

such an amazing car

my favorite in formula d

YEAH I SAID IT

.... or this could be Ari and the Lexus? Sexy JapaneseFalkengirlwholivesinLAsomeofthtime and the V8racenascarsoundinglexusIS? As you appreciate the beauty of Ari you'll notice that she is plugging her ears. There is a reason for this. That Lexus is