Wider Than Your Average

Ved Kay has owned his Volkswagen MkV Golf R32 for over a decade now, but what started out as simply wanting to add some width to its body turned into an extensive eight-year project in which no stone was left unturned.

I first met Ved back in 2013 when I visited Australia for the first time. I had known about Selectnine and Zen Garage before my trip from Johannesburg to Sydney, so made it a priority to drop by.

At this time, Zen Garage still had a physical space, which was a great place for like-minded people to come and hang out at and talk cars. I met Zen‘s Justin Fox and Ved from Selectnine at the shop, and since then have kept in touch via Instagram.

Ved started his R32’s wide-body conversion back in 2012. Working with the guys from Concept Garage, the plan was to build a one-off kit from fiberglass that would be moulded into the original bodywork to give the Golf an OEM+ look. The main push behind the wide-body was so that Ved could fit a much larger wheel and tyre combination than what the factory fenders allowed.

Given that Ved and Concept Garage were working from scratch, grinding and cutting down the factory fenders, shaping them and then moulding the newly-designed fenders and modified front and rear bumpers in place took a long time.

At the completion of this stage in 2014, the R32 was fitted with the same custom 19-inch Forgeline wheels it wears today. The car was then used as a showpiece, both for Ved personally and Concept Garage as a promotional piece for their new shop.

The Golf remained this way until 2016, when Ved decided it was time to go all out with a number of track-spec performance modifications.

A brake upgrade was first on the list, and as you can see, Ved opted for an OEM parts-bin package – 996 GT3 RS calipers matched to 380mm R35 GT-R rotors up front, and a Porsche 997 setup at the rear.

It took some work to fit the big brakes, and this part of the build was handed over to the guys at Heasman Steering & Suspension who first mocked everything up in Solidworks.

Some parts needed to be machined from scratch, while others – like the VW Passat wheel bearing housings – were modified to suit. Custom brake hats were also required for the 5x112mm wheel fitment.

At first, Ved left the calipers in their OEM red finish, but soon after tried something different with hydro-dipping. Ultimately though, he settled on a custom silver finish with yellow Porsche logos, which I think is by far the best look.

As you may know from my recent feature on a sequential-transmission-equipped and 700whp Lancer Evo X built by Powertune Australia, I was back in Sydney over the New Year break.

The Evo shoot came about because of Ved’s car, which was also in the Powertune workshop being finished off. In fact, it was so fresh from going under the knife for some high performance mechanical surgery that it had yet been made road legal again, hence why this shoot happened on-site.

Before I delve into the performance upgrades, of which there are many, let’s take a closer look at the R32’s exterior. The centre section of the bumper which extends up into the grille area was replaced with a custom carbon fiber piece, and there’s also a new carbon front splitter and side mirrors to match. Headlight eyelids are one of those love-it-or-hate-it modifications, but I think they suit the whole mean demeanour of this car well.

Looking down the sides of the car shows you just how wide the fenders actually are.

From a rear-on view the wide-body conversion is a little harder to spot, but your eye is immediately drawn to the exposed rear subframe (more details on this in a moment). There’s also a carbon fiber wing and LED tail lights.

Shortly after the brake conversion was completed, Ved sat down with Chea from Powertune Australia to work out a plan of attack for the engine and drivetrain. The idea was to over-engineer everything so that it’d last out on track, so while Ved asked for 350kW at the wheels (470whp), the car has been built to support 500wkW (670whp). Boost was required.

A key partner in the engine build was HPA Motorsports, and to that end the turbo package is based on HPA’s FTX600 kit for the VR6.

The only real difference between what Ved has and what you get in the 600hp HPA kit is the switch to a custom tubular turbo manifold and some modifications to the water-to-air intercooler. When you open the hood, the visual result is pretty spectacular.

On the cool side you’ll find a Blitz SUS Power air filter, a custom 4-inch intake, and a flex-fuel system that comprises of a custom surge tank, twin Walbro 450lph pumps, and 1,650cc Bosch injectors.

The turbo itself is a large twin-scroll BorgWarner EFR 8374 with twin Turbosmart wastegates employed for boost control. Just check out the work that went into the custom stainless steel manifold.

The custom pipe-work continues with a 4-inch down-pipe running into a 4-inch single exhaust that splits into two tailpipes at the rear.

Other modifications include a custom oil cooler setup, billet engine mounts from 034 Motorsport, and an Ecumaster EMU Black ECU with additional CAN expander.

To cope with the extra power, the R32’s driveline was beefed right up, starting with a DQ500 transmission from a 2017 TDI Tiguan. Not only is this VW/Audi’s strongest DSG box, it has longer gear ratios which are well suited to the turbo setup. Currently, the gearbox is running its stock clutches, but the transmission ECU has been remapped by Etuners to suit the Golf’s torque output and RPM range.

The rear subframe was also removed, refurbished and upgraded along the way. Meanwhile, the suspension features KW coilovers, H&R sway bars front and rear, and SuperPro bushes throughout.

Inside, a few upgrades have transformed the space. This starts with a custom half cage built by AGI Australia, a pair of Recaro Sportster seats with Velo harness belts, and an OMP steering wheel.

The most interesting addition is the MME Motorsport WRC-style push/pull paddle shift system. Ved only has his right arm, so this single shifter paddle allows him to manual shift up and down gears with ease – something not possible with the factory twin paddle arrangement.

Eight years is a long time for a build, but in this case it was well and truly worth the wait. Nothing was rushed and everything was planned out well in advance, allowing Ved to complete the process in stages as his budget allowed.

Ved got his car back from Powertune just before Australia’s Covid-19 restrictions were put in place, so hitting the circuit is something that’ll have to wait for now. But I’m sure that when a little bit of normality returns to our lives, Ved will waste no time getting this very cool R32 out for a blast around Sydney Motorsport Park. 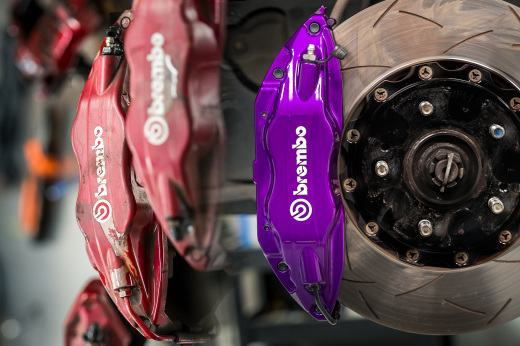 A Quick Stop At Fast Development

Nice to a Golf done differently. Here in Germany, every 20 year old with a GTI thinks they are the hottest shit ever but they all look the same. Lowered, wrap, exhaust, wheels, maybe window tint and voila: boy racer. Basically everything people used to say about Civic drivers apply to Golf drivers over here.
Did I misunderstand or did you say Ved is one-armed? It is cool that he can still drive it then!

Yeah he indeed only has one arm, so this build is really a dream come true for him. I think it's the same the world over. Here in South Africa, that's pretty much the same mods everyone does to their GTi's as well

I'm from Austria and we have the same situation here with the Golf Racer. It's very cool to see a complete different Golf. My Respect for this Build. This is my definition of ''Build, not bought''.

We got the same vibe here in Brunei with Golf Racer. Showing off with their crackle pop whatnot sounds.
But anywayyyy...Mad respect for the craftmanship with the welding and the appeal it gives out. Bonkers!!

Awsome build! Where can we see some videos of this Golf?

I'm sure once lockdown measures are relaxed, Ved will take it out for some track action, you should follow his Instagram for that.

Holy sh**! One of the baddest R32's on the planet! Workmanship is unbelievable! Speechless!

I know right, I love this thing man!

Love how they went all out without adding a silly air-ride kit to it, awesome build!

No air, don't care. A great example to show that you don't need air for a killer ride.

What was the benefit of adding the MK6 R rear axle over the stock Mk5 one? They're both Haldex/PQ chassis cars?

Had one laying around from a part out score. Was already freshening everything else up to new in drivetrain/engine, figured chuck it in all clean and fresh.

I'm not sure, but I'm guessing the one in the MK6 R has newer tech, or it's stronger perhaps?

It's a fantastic project and one he should be as proud of as I am jealous.... But its not really a R32 any longer, its a custom built car.. I have an untouched R32.

The mighty VR6 has many forms

As long as the R32 motor stays in there it'll always be a R32. That stock one of yours is surely climbing in value nicely though

Is 235 the widest you could fit or was there some other limiter?

Definitely could've gone wider but when we released the bodywork stage, it was slammed on it ass for the show haha.
So then they became the street wheels, wasn't on the road much anyway as it went for further work.
Track wheels are 18x10.5 with 285s

was never going to be practical but after all that work we just wanted to have a bit of fun with it.