If you want to improve something, or even truly understand and appreciate it, stripping it all the way back to its core is often the only real way to go about it. It’s logic that Adam and Joel Hedges, the two brothers behind New Zealand-based drift workshop C’s Garage, can definitely relate to – although not in the way you might first think. Sure, it was through pulling cars apart and putting them back together that the pair first developed their engineering skill sets, but ultimately that’s only part of the reason why the two freshly-built drift machines I’m about to show you exist.

Japan, or more precisely the Osaka drift scene in which the brothers entrenched themselves in last year, is the other. It wasn’t their first time visiting drifting’s motherland, but Joel’s 12-month working holiday and a subsequent four-week visit by Adam, put a whole new perspective on things – especially when it comes to building and setting up a car for maximum driving effect. 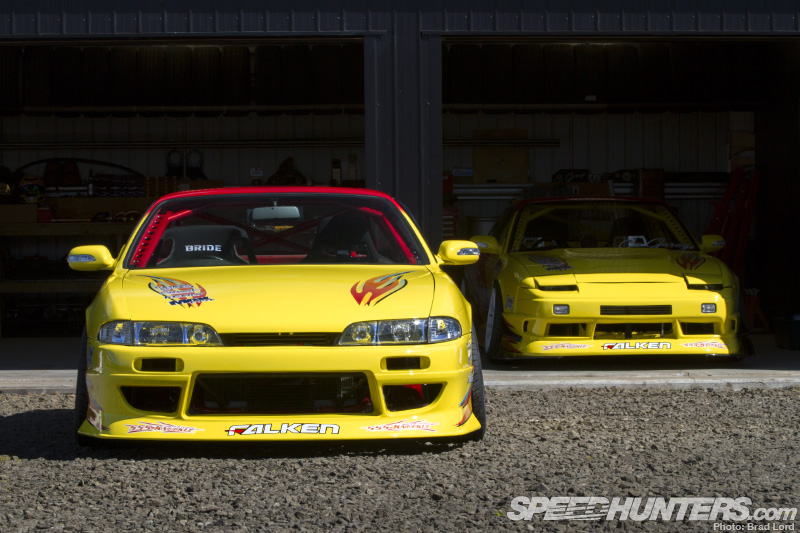 That’s not to say the pair didn’t know how to build a competitive drift car beforehand, but more so that prior to being inadvertently schooled by some of the best drivers in the Kansai region during regular sessions at Meihan Sportsland, Bihoku Highland and Suzuka circuits, function had always taken a back seat to form – at least in the early years anyway. But as Adam’s S14 and Joel’s S13 go to show today, they haven’t had to give up one aspect to enjoy the benefits of the other.

As Joel explained, both cars have been engineered with the focus on aggressive driving. That means lightweight SR20DET engines running at a medium state of tune for responsiveness and reliability, and chassis dialled in for utmost grip.

Although the two cars share many similarities, they’ve actually both been built for different purposes. Adam’s S14 was assembled from the ground up for the highly competitive D1NZ Pro ranks, and Joel’s S13 was been rebuilt from his existing all-yellow Toyota 1JZ-powered car for the second tier D1NZ Pro-Am division. Even though the pair have years of drifting experience under their belts, the forthcoming 2013/2014 season will be the first time either of them have properly competed in the national championship.

It’s the way the two cars have come out the other end that’s the real testament to Joel’s and Adam’s collective ability to see projects through from concept to reality. And especially so when you consider that they completed 99.9 percent of the work by themselves.

That’s all the fabrication, the engine building, the wiring, the graphics design and even the paint. In fact, only the tuning and the vinyl application were outsourced, which I think is pretty impressive given that neither brother works in the automotive industry. Adam builds houses for a living, and Joel’s at university studying for a business degree in between working part-time.

When I caught up with the guys at C’s Garage last weekend, the S14 had literally just been finished and was rolled out of the workshop for the very first time after almost 2.5 years in the build. Although most of their energy was focused on performance, both brothers really wanted to inject some Osaka drift style into their cars, and I’m pretty sure they’ve pulled it off. Adam’s car runs D-Max Type 3 bumpers and side skirts, Behrman DMD front fenders and Chargespeed rear fenders, along with a 326 Power rear spoiler and a Supermade roof spoiler. On top of the custom yellow-to-red fade paint complete with rainbow glitter, there are other neat details too, like clear front headlights and LED tail lights.

If these cars had been built years ago, you’d probably would have found shiny, wide, deep-lipped Japanese three-piece wheels bolted up at all four corners, but that style was never going to cut it on a car being built with purposeful intent. That said, both Silvias run lightweight single-piece rims sized up at 17×9-inch for the front end and 18×9.5-inch for the rear. In Adam’s case, it’s a set of classic white RAYS Engineering Volk Racing TE37s wrapped in Falken tyres.

Under the bonnet you start to get some idea as to the extent of work that’s gone into this car. The inner fenders have been cut away and the heavy chassis rails ahead of the front suspension towers have been removed and replaced with steel tubing. Like the body shell prep, which also includes full seam-welding, the engine build is all Adam’s work. There are plans to piece together a fully forged motor at the mid-way point of the D1NZ season , but for now the SR20DET makes do with its factory-spec pistons, rods and crank and a lightly prepped cylinder head featuring 264-degree camshafts and valve springs and retainers from the Brian Crower catalogue.

The GReddy TD06-20G turbocharger is a good match for the 2.0-litre four-cylinder, which is exactly why it was chosen here; boost controlled by a Trust 46mm external wastegate set to dump at 1.5-bar (22psi) through an in-cabin HKS EVC 5. The turbo is mounted in mid-position on a thick-wall tubular exhaust manifold that was hand-fabricated in the C’s workshop. Likewise, the 3-inch down/front pipe and exhaust system and that rather tidy-looking breather tank is all Adam’s handiwork too.

Unlike the front end, the rear retains much of its original structure – minus some weight saved by removing the boot floor/spare wheel well and factory fuel tank. A JAZ cell replaces the latter, flanked by a Bosch Motorsport 044 pump that supplies 850cc Sard injectors via -6AN braided steel lines.

To keep engine running temperatures in check, special attention was made to the cooling system. In that respect, Adam fabricated the intercooler tanks and pipes, and there’s an ARC aluminium radiator and Trust GREX oil cooler in the mix.

Tuned through an A’PEXi Power FC engine management system, 422hp has been realised in the current set-up. Sure, there are cars running double that number within D1NZ’s Pro ranks, but given its balanced focus I’m pretty sure Adam’s going to have a competitive car on his hands. There’s plenty of room for weight reduction too if that’s required, and of course, the ability to wind in more power once the engine’s been toughened up with forged internals. With an R33 (RB25DET) five-speed gearbox, ORC clutch and flywheel, and a limited slip diff equipped BNR32 GT-R rear end to back it all up, there shouldn’t be any dramas in the driveline department.

Of all the aftermarket gear in the car, it’s the suspension and steering systems that have been on the receiving end of the most modification. It seems like the entire Parts Shop MAX catalogue has found its way under the S14, including its Competition coilover kit, plus control arms, traction and toe rods, subframe risers, drop knuckles and more. C’s Garage’s own product line features heavily too of course. That includes a steering rack relocation kit and shortened castor brackets as well as C’s world-famous 555 Knuckle upgrade, which drastically increases steering lock and allows the car to change direction much quicker for fast and aggressive entries.

The brakes too have come under Adam’s scrutiny, with retrofitted BCNR33 GT-R Brembos on the front end and a Wilwood set-up out the back that utilises dual two-pot calipers – one exclusively for the hydraulic e-brake. Earl’s braided brake lines limit flex to provide a firm pedal under heavy braking.

A competition-spec drift car without a huge rear wing? I guess time will tell if Adam needs to rethink that strategy – especially on the higher speed tracks around New Zealand – but in the meantime I’m sure I’m not the only one really liking the look here.

Inside the S14 you’ll find a C’s Garage weld-in roll cage (courtesy of Adam of course), Fabulous Expand 330mm steering wheel, NISMO shift knob and a Stack 8100 digital display to keep an eye on all the vitals. The factory dashboard got to stay, but it’s fully gutted to save on weight.

There’s also a Bride Gardis III driver’s seat and Parts Shop MAX passenger seat with Sabelt harnesses still to be added. Adam popped out the switch panel in the centre console so I could take a look at his custom wiring efforts, which like every other facet of the car has been completed to a super-tidy standard.

After sinking so much time and effort into the build, I’m not entirely sure how I’d feel about beating the car down if I were in Adam’s shoes. But then again, the driving experience that it’s been designed to afford has got to be so much more rewarding than the short-lived upset a few destroyed bumpers might cause, right?

For Joel, drifting is more about fun than anything else, and although there’s little doubt he has the driving talent to run in D1NZ’s premier class, right now he’d much rather compete at a slightly less formal level in a car with more ties to the street than that of a full-blown race machine.

Being a student, cost is one thing of course, but mechanical aptitude is another. Simply put, each Silvia is a reflection of its respective owner’s car building skills, although the brothers do help one another out whenever assistance is required.

The SR20DET set-up in Adam’s car bears many similarities to that in Joel’s, including a mid-mounted GReddy TD06 turbo and an A’PEXi Power FC engine management system. With the same 1.5-bar boost limit, output is slightly down at 395hp, but it’s a solid number nonetheless and more than enough to get the job done. To transfer the drive a Nissan 300ZX/Fairlady Z32 five-speed gearbox has been adapted to fit, running out to a Nissan R200 LSD rear end through an OS Giken clutch and flywheel combination.

To comply with D1NZ Pro-Am regulations and to keep his budget in check, right from the get-go Joel planned to use 235-wide tyres. Falken Tyres has helped out in that respect, supplying its Azenis RT615K semi-race compound for the front end (yet to be fitted) and FK452 rubber for the rear. Like Adam’s S14, the S13 features wheels with staggered width and diameter, but Work Emotion CR Kiwamis are the choice here.

Although the S13 still maintains all of its original unibody structure, the chassis has been heavily tuned with the same drift-specific Parts Shop MAX and C’s Garage suspension and steering components as Adam’s car.

Inside, it’s a simple yet functional affair, with a C’s Garage weld-in roll cage built around the Silvia’s factory dashboard. Joel really wanted to retain as much of the original interior as possible, and that’s essentially how it’s ended up. It’s easy to liken this thinking – and the built in its entirety – to Japanese D1 Street Legal specifications.

I don’t think I’m wrong when I say that the defining point of Joel’s Onevia has always been about the way it looked.

It might not be sitting quite as low as it once did, but you certainly can’t say that it’s riding high now either. Like the S14, the exterior features a mishmash of fiberglass body kit panels, but not a mishmash of vision. The bumpers and side skirts are BN Sports fare with front and rear fenders from Origin-Lab and D-Max respectively. A Garage-S vented bonnet features too, as do D-Max boot lid and roof spoilers, Origin-Lab canards, and M-Sport vortex generators.

What the C’s Garage brothers have managed to achieve with their cars in the past is pretty cool, but these new builds have taken it to a whole new level of awesome.

How either of the C’s brothers do in D1NZ is kind of irrelevant coming into their first official championship season. They’ll be out there regardless, because drifting is their life. C’s Garage: remember the name.

God damn these cars are amazing!