It’s not the cars, it’s the people, it’s what happens when the wheels stop turning or the engines die. I think that’s what really makes the automotive world so enticing to me. Without that human connection, that history, my interest is limited as though the inanimate subject matter hasn’t earned my respect, there’s nobody to introduce us, meaning the relationship between metal and blood has always intrigued me.

I pay my way with magazine articles, commentating and general musing, so without these people that I found so fascinating I wouldn’t be able to live the life I do. This is my small homage to them. 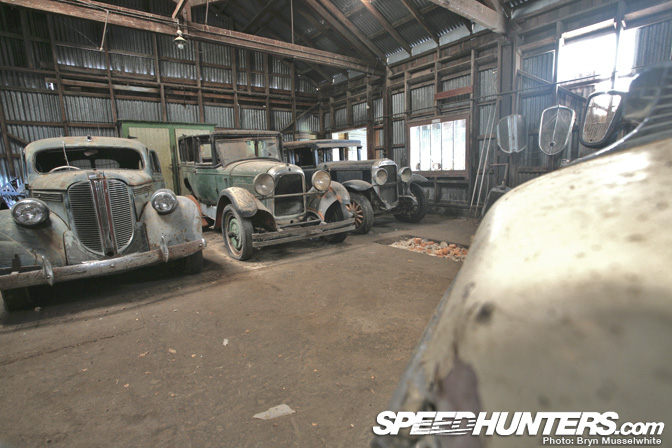 When a Welsh national fly fishing champion stops you in a campsite on the North Island of New Zealand and tells you about a backpackers at the bottom of the south Island with it’s own collection of over sixty classic cars, the map gets turned and it’s all downhill. A month or so later I’m rolling up a dirt track road looking for 'The Asylum', using part of the grounds of the old Seacliffs Sanitorium, itself the largest building in NZ until it burnt down, a yucca tree leans over guests in the lounge and an ageing motorbike frame provides something to lean on when playing pool. Frank started collecting old metal fifteen years ago and hasn’t stopped yet. In the collection of old buildings, barns, kitchens and workshops, a Gloria Prince shares space with a Citroen DS and a whole boys own book of cool metal.

Franks daily is a four door 63/64? Impala that he takes guests for surf lessons in. I arrived intending to stay for a night and left a week later having done a deal that saw me owning an early 60s VW Splitscreen panel van.

Wandering the pits at Bonneville is a rare pleasure, because you get to meet people like Jesse Winders. Running his Rabbit pick-up in the sub 1000cc class, he managed to scoop the mini pick-up record at the USFRA event a couple of years back.

A truck fitter from nearby Salt Lake City, yes I did say sub-1000cc. Having pulled a scored and blown block out of the metal skip for the second time, he blanked off the oil sprays in the crank on cylinder two and four, ground the corresponding cam lobes off, shaved his tyres and went racing.

I found him in impound proving his engineering excellence to an impressed scrutineer. He topped his weekend off by heading back out with a 2ltr motor fitted, before attempting more runs with a VR6 in it’s place. Low budget, big fun inspiration.

Horopito Motors in New Zealand is a scrapyard and the kind of place I’d like to live. Roughly 4500 cars, trucks and other wheeled things too rusty to identify call it home. Owner Colin took the place on when his father in law died and his wife wanted the family business to continue. As an example of what you can find there, I once owned a 1952 Standard Vanguard Estate built by Mulliner, I was told it was one of only eleven known worldwide, yet I see three in Horopito. Japanese, European and American metal is spread everywhere, with a heavy lean to 50 and 60s British stuff. Like I say, I want to live there.

Listening to Colin at the end of his working day as he swaps out the screen on a late 90s Toyota Corrola, I ask why he doesn’t quit the modern vehicle testing and repairs side of the business, instead concentrating on the classic spares? He shrugs and looks at me with the look of man who knows there is more work involved in this place than his lifetime has space for. I smile, nod and help him lift in the Toyotas new screen.

When a man who you’ve only just met and whose yard resembles the results of an art college day out at a recycling plant invites you into his basement, you go right? As I recall I found Mel Gould about thirty miles east of Cheyenne in Wyoming, maybe somebody could confirm that as I’m sure he’ll still be there. Invited down into ‘Buryville’ (two 55,000 gallon ex-petrol tankers sunk into the ground, plus assorted chambers), it was here that I realised the genius that lay beneath.

Ever heard of an installation artist named Christo?  Mel was responsible for inventing an innovative ground anchoring system for his creations. Did you ever hear of the Purple People Eater? Mel Gould may well have been the first to use the name.

His house and workshops are heated using old sump oil from the local bus garage, every tool, lathe and press are powered by electricity generated by his many scrap based sculptures above ground and there’s a lift for his wife made using an old filing cabinet and the back axle from a 50s wreck.

If you pass by, stop in… His ten-instrument, one-man band is a sight to behold.

I'm not entirely sure what just happened, but I like it. More please.

i agree, the stories are what make the photos worth taking. otherwise it's just a frame full of broken metal.

Bryn is a legend. And a lucky man for his experiences

bryn is a legend

Really good read, I like these quirky stories. The first sentence really does put the entire article into perspective, great job!

I want more too :O

well done Bryn, great to see you on here and i look forward to more of your brilliant tales sir.

Its photos like that of Horopito Motors that sadden me the most. People gather and gather for so long and then just let it rust in paddocks without ever planning to do anything with what they've gathered.

There is a similar person near my parents who won't sell anything to anyone, even at well inflated prices. He is too old to be able to do anything worthy with what he has, and too stubborn to realise that us young 'kids' (I'm 26) aren't going to just use these cars as paddock bombs.

I love these type stories.

It shows the real motor heads, they might not fit into any cool mainstream category but they depict their passion that exist's.

As much as I like the go-fast stuff in this place, it's car stories like these that really make the car world go round. Trends come and go but people like the bunch portrayed here are the basis for it. Best post ever.

Brilliant post. I've only met Bryn once I think but will hopefully run into him again soon. Always blown away by the photography and the lifestyle, Seems like he's living my dream and doing it alot better than I ever could. Well done

Dude, great pics, but sort the hair out.

I have a hard time understandig what just happened ,but it's cool.

Thanks for the comments guys, much appreciated. Glad you get where I'm coming from, some of the time. There's plenty more where this came from

And Rhys, Horopito has been a scrapyard since this stuff would have been new. So instead of it being baled decades ago and recyled, it's been preserved in the only way possible with this sort of scale. Colin said that his father in law was very much in favour of preserving anything he could, and let's face it who can afford to keep contemporary scrap cars under cover in these sorts of numbers? So that we can bemoan their efforts decades later... But yeah, people that personally hoard stuff can be a bit annoying.

Still living the dream,Bryn!! Will be in touch soon as have developed slightly more than just a clubbie estate these days!! Good man keep it up!!

Have heard some of the stories but to see the pics as well - fantastic. You are lucky to have such a talent.

i got to horopito wreckers about 3 to 6 times a year i love that place too,i live in taupo about a hour and a half drive away