It’s easy to take for granted just how much development goes into ‘proper’ modification.

But that’s also a testament to doing a job properly. As a tuner, you’re supposed to do the hard work so the lucky customer can reap the benefits after. And in the case of Porsche 992 tuning, that means extra power. Lots of extra power.

When I visited Bangkok recently, I had the pleasure of spending some time with Warren Adulayavichitr and the team at Autowerks Asia to get a feel for how they operate and what they do. As one of Thailand’s biggest tuners, they’re responsible for some of the wildest builds right now.

And that means continually seeking out the tech and products which elevate their tuning to the next level, such as the recently developed CSF intercooler upgrade for the Porsche 992 Carrera platform.

The car pictured here is far from stock already; it’s essentially modified to a ‘Stage 2’ level, which consists of an Akrapovič Evolution titanium exhaust and link pipe, IPD intake plenum and BMC air filters (as well as the all-important software). The means a power hike all the way to 550hp and 700Nm, which is more than healthy for an otherwise ‘base’ 992 Carrera.

But power isn’t the only focus here. AP Racing discs and lines take care of the extra stopping power required, and HRE R101 forged wheels beef up the exterior to match its performance. But what about if you want to push the tuning envelope even further; what happens then?

Ever since Porsche made the jump to a 3.0-liter turbo engine, it has (inevitably) brought a lot of potential into the aftermarket tuning scene. With basic mods 550hp is a healthy result, but swap out for bigger turbos and you’ll soon be knocking on 700hp. Or as Warren from Autowerks helpfully explains, the “GT3 killer” package.

Modern engines are incredibly efficient, so the moment you begin pushing them into serious power levels the need for cooling increases exponentially. And that’s not just for the huge horsepower builds; the same goes for those wanting a more track-focused build too.

So, what you’re looking at here is one of the first intercooler upgrades for the 992 Carrera, built and developed by CSF Radiators. With a little help from Autowerks, it’s also the first 992 in Thailand to be fitted with this kit.

Naturally, Warren and the Autowerks team were super keen to see what benefits could be gained from the CSF upgrade. Time to get the intercooler fitted and reveal some proper numbers…

For this particular test, Warren strapped the car to the dyno in order to gain a base result. Autowerks use a SuperFlow Dynamometer, an incredibly sophisticated chassis dyno that ensures proper data is gathered in real-time for precise tuning. After putting the 992 through several runs, the overall room temperature was taken to be 28°C (82°F), which is worth noting for when we see the ‘after’ figures.

I’m always amazed by just how tightly packaged modern Porsches are. It’s a testament to Porsche’s engineering department, but a headache when it comes to trying to extrapolate more cooling performance, as there simply isn’t the space to fit the biggest cooler possible. We’re not in the ’90s anymore…

But thankfully, Ravi and the CSF team thrive on these sort of challenges. Through improved core technology and packaging, they’re able to greatly improve the flow and overall area.

You can see that here with the stock versus CSF units placed side-by-side. Notice how the CSF unit manages to utilize more of the area around the edges to maximise cooling. That also means the all-important factory ducting can be retained, as well as the intercooler utilizing all of the stock mounting points to result in a super slick install.

CSF even include fitting instructions with every kit to make installation as simple and easy as possible. Just look how neat the intercooler looks once bolted in place – you’d be fooled for thinking it was an OEM item! But looks are nothing unless it’s improving performance. Time to head back to the dyno…

Thailand is a hot country, and by this point in the day the air temperature inside Autowerks’ dyno room had risen to 33°C (91°F). Fans on to keep the test as fair as possible, the best we can do it bring the temperature down to 29°C (84°F) – not ideal, but not too far off from our base level.

With the 992 going through several runs, it was immediately clear that – despite the warmer ambient temperature – the car was already running much cooler, even through the mid and high rev range.

The results quite literally speak for themselves. Power is up throughout the whole rev range, with the biggest gains coming in between 3,500rpm and 4,000rpm – an additional 32hp and 50Nm of torque just from the intercooler upgrade. But truthfully, the biggest benefit of this CSF upgrade isn’t just the power increase – it’s the ability to maintain consistent power (and temperatures) run after run.

“From our own testing on the 992 Turbo and RS6 coolers – which use similar core specs – the biggest delta between CSF and OEM is that the performance from the OEM coolers deteriorates quickly after several dyno runs,” Ravi at CSF explains. “Compare that to the CSF coolers and they stayed consistent from the first run right through to the fifth. This is especially beneficial for track cars, drag cars and even fast road cars. There’s no power loss because of heat soak.”

While it’ll come as no surprise that an uprated intercooler increases power, it’s awesome to see that – even with cars as efficient and tightly packaged as the 992 Carrera – manufacturers like CSF are still able to push the boundaries leaving the door wide open for tuners like Autowerks to continue development.

We often look back at eras of tuning with rose-tinted specs, and while you could argue a 992 Porsche doesn’t really need anymore power, if we’d all adopted that attitude there wouldn’t be a tuning industry to enjoy. So we salute CSF and Autowerks; if our time with ICE engines are limited, we may as well enjoy them to their absolute limit.

Thanks to Warren at Autowerks and Ravi at CSF for helping coordinate this shoot. Stay tuned for more from Bangkok! 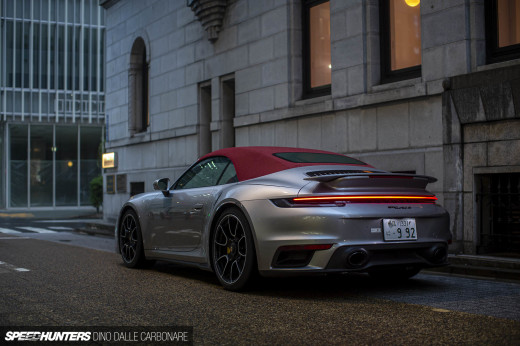 So about to yawn given in Bangkok this AUTOMATIC base 992 is considered a supercar but in the rich areas of USA it's a grocery getter FOR THE ELDERLY... But then the article focused on the tuner's install process and was delighted (wouldn't matter if this was a sneak peek at the R race car or a 4 cylinder 914 or a 80's beetle then). More!!! Different makes! Nice

first @straightR the automatic is faster. second, in what part of the country is a 992 a grocery getter for the elderly? That really make me curious what you drive. Please don't tell me something that has less performance then this elderly car. cuz then you can STFU

Rich areas? You mean the USA

The Thai always did car tuning better than japan. Fight me weebs.