The 7th of July in Japan has always marked a special occasion – the celebration of Mazda’s RX-7 and anything else rotary-engine related.

Once upon a time, 7’s Day was celebrated through a massive gathering at Daikoku PA, but today it’s evolved into a small series of events at race tracks including Mobara, Tsukuba, and some other small circuits around the country.

I’m not sure we’ll ever see 7’s Day meets the size they used to be around a decade ago when 300+ cars showed up, but any gathering on 7/7 still has a special feel about it. I didn’t want to arrive late at Daikoku PA and be confronted with a closed parking area (the onsite police have a habit of doing this at bigger events), so I arrived just as the sun was headed for the horizon.

Despite it being early, there was already a pretty good lineup of cars, so I immediately started hunting out the gems.

This particular car was riding on a set of Mazdaspeed MS-02s wheels (by RAYS). I’m not crazy about the look of these things, but if you own a RX-7, they’re a wheel that you definitely need in your collection.

At events like this, I always end up spending much of my time checking out wheels and fitment.

At 7’s Day, you know a lot of the people who bring their cars along have had them for a long time, and that means they’ve probably been through a few wheel setups. This GReddy-themed FC3S RX-7 nails the late-’90s BBS look really well.

The RAYS Volk Racing TE37 never disappoints though, as this black FD on SLs demonstrates perfectly.

If the owner has gone a more modern route with body styling, you’ll often find lesser-known wheels under the arches.

My plan was to stay until the daylight faded, and leave before the police shut the gathering down.

That said, as this seemed like a far quieter and more chilled 7’s Day meet than years prior, maybe that was never even going to happen.

I’ve lost count of exactly how many times I’ve covered 7’s Day at Daikoku PA, but if I had to guess, it would be around 15 or 16. And as was the case at many of these previous visits, something other than an RX-7 ended up stopping me in my tracks this year.

Sometimes it’s a Cosmo or an RX-3, but this Mazda Luce Turbo RE-130 powered by a 13B turbo rotary engine was the real standout for me.

While the body design is nothing to write home about – it’s as square and uninspiring as you can get – there is something special about this model. Maybe it’s the pillar-less front and rear doors, or the over-engineering that mid-to-late-’80s Japanese cars had, or perhaps just the fact that something so average-looking came fitted with a high performance rotary engine that just makes it so cool. It’s probably a combination of all three.

As the afternoon gave way to the evening the cars kept arriving.

And with that a nice variety.

It’s definitely hard to miss a Veilside Fortune RX-7 in The Fast and the Furious: Tokyo Drift orange and black form. During my recent visit to Veilside I was surprised to learn that Yokomaku-san still builds these things.

One thing I noticed at this event is a generational shift when it comes to rotary ownership. It was refreshing to see a lot of young kids driving these cars and taking pride in owning something so unique.

After more than two years of a global pandemic, more interference from the police and the emergence of new events, it’s nice to know that on a warm July 7th evening, you can still come down to Daikoku PA and chill with some rotary guys and girls.

In genral i hate to see 1 car, 1 brand,... car meets, but this is THE specific car meet that stands as exeption for me (even air cooled 911 does not make it). Maybe the fact that we know we lost a nice race breed engine to "save" mother nature (i feel the pain as a previous 2-stroke motorcycle).
I think it's a good idea to have a circuit meet in the morning and chill in the parking the afternoon, maybe that's why the gatherings are happening there and the cars still rolled back to the parking area later, plus for sure the police interference over the years played a big factor.

Man lot's of clean RX7s right here! I forgot that it was 7's day lol but it's a great day to celebrate the RX7!
The RX7 will forever be the best example of a successful rotary sports car and is still unbeatable to this day!

Until Mazda makes a new one! If they will...

Any updates on your R34 Dino? It's been a while!

Work starting on it again slowly. Been sitting so long the Optima has totally died! So that's first thing

BringACamera.speedhunters.com
THE auction spot that takes place in the comments of article cars themselves! XD

Are we Craigslist now?

I am the owner of LUCE.
Thank you for the beautiful pictures.
I will attach a photo of the engine room. 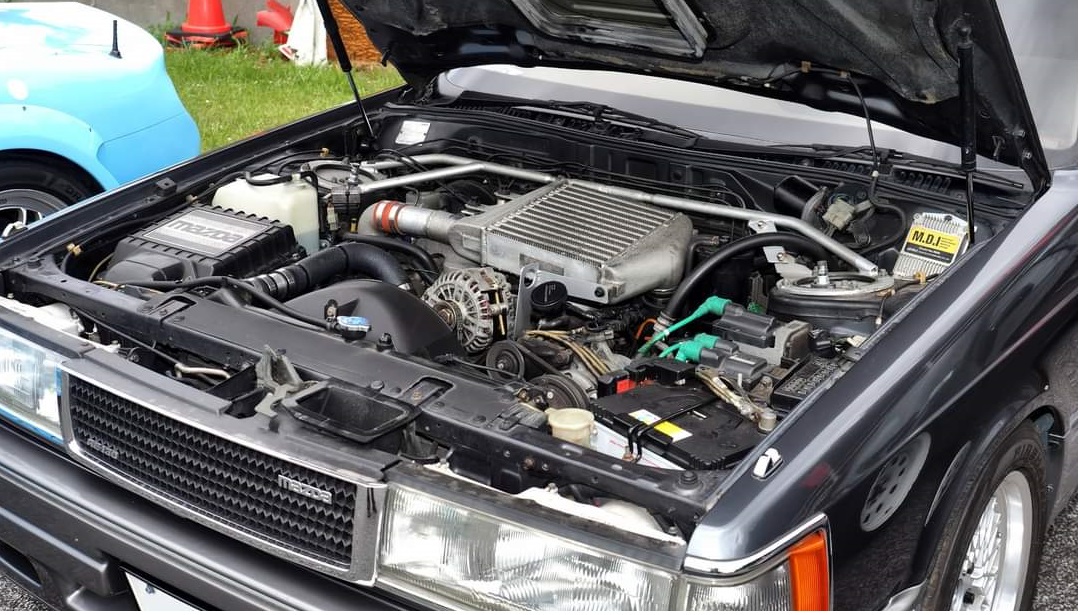 Thank you ozaken! I think it would be great if we could shoot the car properly. A lot of people here would appreciate a detailed feature. If you are interested send me a mail at dino@speedhunters.com or message me on Instagram at dino_dalle_carbonare Thanks!!

That Luce though. Absolute perfection!

Dino, you don't know me, it's ok - im just an ordinary guy, who's reading and following every bit of your speedhunting (in a good way).
But i found some interesting thing - your articles is a finest example of Mono no Aware and the last photo here - is a culmination of it. I can even feel that mood of warm evening and live chatting tho never had such experience.
Your articles are truly art of speedhunters itself!
*just a clumsy way to say "thank you very much" from damned land

Vitaly, thank you so much man, that's the nicest comment ever. Capturing the mood is always something we strive to do here and it's so nice to see that we are able to get it across. It's comments like these that give us our drive!

Your pictures are inspiring for me! I strive to be as good as you one day!

I can practically smell the pre mix from here. Great job on the photos and article. I'm a friend of an FC owner and having helped him wrench on his build more than few times has led me to be appreciative of the relationships that are forged b/w owners and these cars. They are a frustrating, exhilarating, frightening and fun automobile. I still want my 20B swapped hatchback STi lol.