I’ve never been bungy jumping or BASE jumping, or any other form of extreme jumping-out-of-or-onto sports that adrenalin junkies seem to rave about. It’s not that I’m not up for the rush; I’m just terrified of heights.

I couple of weekends back though, I experienced a few fleeting moments of pure adrenalin-soaked euphoria, all the while being no more than a few feet from the ground. Before I get to that, let’s start somewhere a little safer…

In my last post, we walked around the paddock of the most recent Hardcore Tokyo event held at the Gunma Cycle Sports Center in Gunma Prefecture. That was all probably a little too safe, so before long I hitched a ride on the back of a flatbed truck with a bunch of spectators and two other photographers and headed out onto the circuit to find a few good corners I could shoot the action from.

A short walk from the spectator drop-off point, my new photographer friend and I scouted out some choice vantage points and waited for the beasts to pass by. Standing in the foliage, wondering if I was far enough away from the track to escape any out-of-control drift cars, I framed up the corner and waited. The similarities between this and wildlife photography are uncanny.

While we waited, I explained to my comrade that my main camera had been fried by the rain at the RAYS Fans Meet the previous weekend, which was why I was using an ancient D700. While the Nikon is built like a tank, the tracking capabilities and autofocus are definitely showing their age. First world photographer problems, I know…

Before shooting cars, I did try my hand at landscape photography, and to a lesser extent wildlife photography. I soon realised that all the walking to remote locations, and waiting for the most beautiful light and a fox to randomly trot past was a bit slow for me. But shooting this kind of touge drifting is kind of the same. You walk to a remote corner of the mountain road, and sit there waiting for a different kind of beast to run through your trap.

Except this time, you can hear the beasts coming from a mile away, and when they come past it’s with such ferocity that the world seems to disappear and all that remains is the sweat on your brow, and the scared bumper of a Toyota Chaser screaming past in a cloud of tire smoke.

From an organiser standpoint (and of course a driver and spectator one), safety is pretty important at this kind of event. Gunsai is not like some open drift circuit in one corner and a raceway like Fuji Speedway; it’s a mountainous course of real touge which loops its way around the facility’s paddock areas.

There are no grandstands, no viewing platforms and no big screen projections of the action. If you want to see what’s happening on track you either need to be in one of the drift cars, or get a lift on the flatbed truck to one of the designated corners, most of which have space for around 10 people.

Spectators are protected by a guard rail, nothing more. They’re also on the outside edge of the corner which means less chance of a car careering off into the forest around them. Photographers are often a little more – excuse the pun – exposed.

Standing on the inside corner, just a few feet away from the smoking lumps of steel being thrown around bends, it’s probably safe to say I risked my life and limbs for these photos. It’s pretty stupid and I’m old enough to know better, but adrenalin can do crazy things to even the most sensible person (which I’m not).

One car did in fact come off, the driver slamming on the brakes in front of me before his Fairlady Z came to a grinding halt. Seeing that my arms and legs were still intact, I stooped down and picked up his bumper from the curb and set it behind me as he reversed and stormed off.

Being an open course, we weren’t permitted to walk to different corners, so I apologise for so many photos taken from the same angle. Of course, I later found out my photographer friend had discovered a path through the forest that led to another vantage point… After an hour on the track, the flatbed came and picked us all up to return to the paddock area.

Back at Hardcore HQ, a chariot awaited my arrival.

Jun from Hardcore Tokyo had lined up a Crown Athlete for me to use as a tracking car to capture some action from. Normally the Toyota is used for shooting promo videos, hence why there’s a Recaro seat fixed in the boot. We removed the foot rest because I would be hanging outside the car with my camera inches away from the tarmac.

This ain’t my first rodeo, but I was not prepared for how wild this ride would be.

“When we get to the start line, you’ll hear three beeps of the horn and then we’ll go,” Jun explained to me. ‘No worries’, I thought. How wrong I was…

Tracking shots for road cars are usually taken while cruising around 30 or 40km/h and on relatively straight roads. There’s plenty of time to get comfortable, line up the shots and then reposition for the next angle. Not this time.

From the second the third horn sounded I felt I was strapped on to a rocket, not knowing where I was heading, when it would end, or if I would make it out alive.

I’m just glad this was the short course.

Facing backwards, with half my torso hanging outside of the Crown, the only thing keeping me from eating bitumen was my harness and my feet, the latter instinctively hooked around the Recaro bucket seats behind me. My D700 dug into my face as I tried to keep it steady (no tilting digital screen on this old girl), exhaust fumes scolded my hands and the noise was deafening.

It was relentless. Foot to the floor, full throttle through the corners, by far the most intense experience of my life. We went twice, with each run lasting just one minute. It was pure pain on every inch of my body, but after checking my blurry shots, I was ready for another run to try and get sharper images. You can check out a little in-car video here.

Unfortunately, in the words of Eminem, you only get one shot. And truth be told, this whole experience is worth more to me than how sharp the images are. I always walk away from these drift events feeling slightly confused, shaken, ruined and exhausted. And that is fantastic. 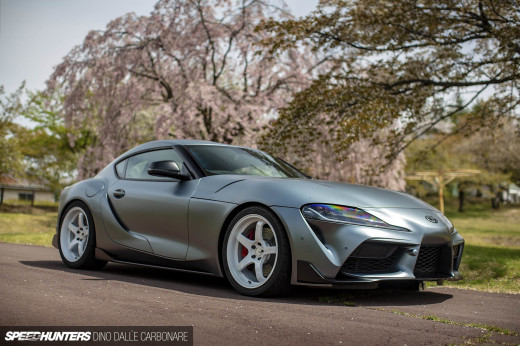 We Drive The World’s First Modified A90 Supra

The pictures you did in the Crown are beyond amazing. I imagined being the owner of the blue S15 and having a picture like yours of my car. Absolutely awesome and a wild experience for you for sure.

Thank you for that article and those pictures. It was a very enjoyable read at the beginning of my work day here in Germany.

Thanks Andy! Hope your day was a good one

Chase cam shots are sick! Gunsai Touge makes for an ace backdrop! Defo worth the risk and discomfort haha

It was pretty lush

Crazy, can you do it again when you get a new camera?

That's real speedhunting right there! That video is nuts- it shows how much trust you have in those drivers and the confidence of the drivers themselves! Give this man a bonus so he can buy a new camera got dammit!! Did I mention the pics were awesome?

Man, would love to be there. Awesome photos and words. Well done! Oh yes, loved the video

My daily dose of JDM goodness

Oh my god, I would pay to go for a ride like that!

These are the type of posts that got me hooked on Speedhunters 7 years ago. Thankful these stories still exist

The camera may be old, but damn those photos look great!

You sir, are a madman. I do believe we could be friends. Awesome shots. That's a ride I'm sure you'll never forget!

It gets NSFW when the FD/s15/AE lay on the sexy like bringing a forged carbon clad RED/Arri to capture it all.