In 2019, Toronto’s Motorama Custom Car & Motorsports Expo – the show I’ve been walking you through the past two weeks – decided to disrupt their happy family with a new addition called Mayhem.

This aspect of the event is dedicated solely to traditional hot rods and customs, and with its own hall, judges and music it’s become a show within the show.

Mayhem isn’t divided from the rest of Motorama due to some sort of ‘us versus them’ mentality though. It’s just that the cars in this section are quite a bit different than the ones in the other halls. Front hall cars are often suspended over mirrors, where many of the Mayhem cars may have been parked up over an oil drain pan prior to being shown.

Cars in other areas of the show have dyno sheets and to-the-letter spec lists; the ones in Mayhem are made up of a little bit of this and a whole lot of that. They’re a weekend shift parts counter employee’s worst nightmare.

These vehicles have no ABS, no power steering, and often no safety frills to speak of at all. They’re a representation of when hot rodding was grassroots and basic, designed for the young, or at the very least the young at heart.

Is one style or hall better than another? Personally, I think not.

Each has its merits, which is why Motorama saw fit to include both. As a purveyor of car culture at large, I needed to showcase both as well.

Fun Starts With An M

I think at some point every kid has wanted their own go-kart, and these two ‘kids’ – AKA full-grown men – just happened to take a little bit longer to make it a reality.

The gold creation above started as a standard off-road kart before its owner got out the metal flake and polish. Known now as the ‘Death Kart’, the big rear tires and stinkbug stance means that yes, it can pull wheelies.

The Ford kart looks a little bit more like a proper hot rod, just shrunk down. I’m told that it may have actually started as a very rusty 1:1 scale Ford, but I wasn’t able to confirm this.

If the body shell is indeed the remnants of a rusty donor, the owner did a really great job of pulling it all together. The interior was pretty clever too, made up of wood, signs, an ammo box and green-tinted Lexan.

Car customization is all about personalization, and the vehicles in Mayhem each had their own way of standing out from one another. Custom paintwork was often employed as a way for the owner’s personality to come through.

It was cool to see so many builds wearing their original patina as well. Some vehicles just look better with battle scars from a long and storied life prior to becoming a hot rod.

Don’t take that to mean I don’t love shiny paint either. I’m equally impressed by both nature’s patina and artful airbrush work.

Patterns, flames, lace, pin-striping, flake – it’s all incredible. I particularly like how these cars employ the same techniques a lowrider would, just in a different fashion.

The most interesting cars for me were the ones that had a bit of both -patina and custom paint. It’s proof that after customization, these cars are used just as hard, maybe even harder than when they were stock.

Mel passed just recently and his car now sits with a new caretaker who’s doing his duty to bring the vehicle out to as many suitable events as possible.

Modern cars seem to be increasingly demanding in terms of the parameters they need to run. If the ECU doesn’t receive the correct sequence of 1s and 0s, then the motor won’t fire. But this wasn’t always the case. Things used to be rather simple.

Fuel, air, spark, a bit of suspension, a seat and a few wheels to roll and one to steer.

Really, there’s not a whole lot more a hot rod needs to be an exciting driver.

I’d like to end my Motorama and Mayhem coverage with this heavily-customized 1948 Ford. Earlier in this post I mentioned patina, paint and stories – this car has all of those things.

It was originally built in the 1960s and regularly shown for a few years, and during this time – almost unbelievably – doubled as a daily driver. The signboard even states that the ‘Street Kandy’ paint was blended in a way to better endure harsh temperature changes.

The pictures presented with the car are of it in its prime; the bottom few show it in the snow. As I said, it was driven, at least until it was stuffed in a barn to be rediscovered decades later.

Could you imagine one of the many cars we’ve featured on Speedhunters surviving for a second kick at the can 57 years from today? A post much like this could be all the new owner has to piece together the vehicle’s past. As I writer I can only hope that one day my words can be used to put together the history of a once-legendary vehicle. That’s the real motivation to keep the camera clicking. Until next year, Motorama Custom Car & Motorsports Expo. 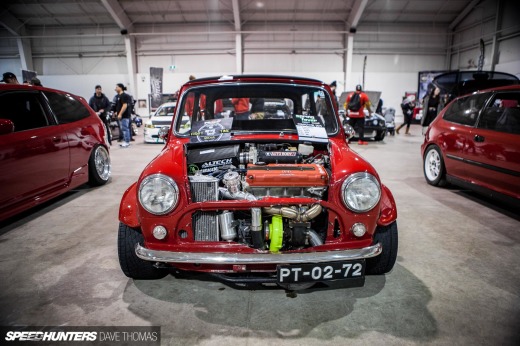 Thanks for all the great photos.
The Chevy-powered bare Deuce chassis looks very nicely done. Sometimes less is more.

Always love a good hot rod show. We are coming into Graffiti season here in Modesto, CA. There will be multiple shows throughout June and the hot rods just take over the streets for awhile. It's amazing.
Speaking of patina and fresh paint.. which side of this show will your truck be in next year? It's a bit of a blend of both cultures.

Hmmm probably not Mayhem because while I've pulled a lot from this era my motor and suspension are fairly modern in comparison.

Some great customs, and a few wild death traps to boot. Love the custom paint work.

Check out this Gasser paint job. It was done on a show called Muscle Car, which was part of the Power Nation.

Thank you for sharing this view of Motorama.

Some great customs, and a few death traps to boot. Hot rods and muscle cars were my introduction to cars, so this brings back a lot of memories. Thank you Dave!