When I first saw Takumi-san’s yellow FD3S Mazda RX-7 on Instagram, I wasn’t sure how I felt. I was drawn in by the bright colour and the huge rear wing, and excited by the muscular, Dodge Viper-esque front end. But I was also confused by the Mazda RX-8-esque rear arches. I couldn’t decide whether a car I lust after for its aesthetics had been beefed-up or butchered.

There was only one way to settle my anxiety – I invited Takumi-san out for a fun drive in the mountains where I could see the car in person.

This is the picturesque Lake Miyagase, about an hour’s drive from my place. It’s the largest artificial lake in the Kanto region and was created by damming the Nakatsugawa River.

There’s a ring road around Lake Miyagase, and although the road surface is not the best and there are corrugations on many of the corners, it’s still pretty nice for a Sunday drive. Hence why the main lookout point – which has a big information centre and restaurant – is a great place for meeting up with friends and doing some car-spotting.

The best time to visit is in autumn when the foliage is ablaze with scarlets, clarets, ambers and gold hues. But, despite the freezing temperatures, wintery silvers, terracotta and auburn colours are equally beautiful. Aside from the driving aspect, it’s great to just be able to escape the urbanised sprawl of the great Kanto Plain, which is expanding the Tokyo megatropolis out into Kanagawa.

Now that the rebuilt engine in Project GC8 is running smoothly, I’m going to make more of an effort to get out and explore places like this. Not only for the joy of driving, but also to get some serenity and recharge my batteries.

Up here in the mountains, you can find true quiet, interrupted only by wildlife – more on this in a moment – and the sweet sounds of modified cars like Takumi-san’s.

His FD3S is a bit of a mongrel, with bits from here and there. The wide-body kit is from Panspeed, the aero bonnet is from Scoot, and the rear bumper and tail light surrounds are from RE Amemiya.

The internet says the Panspeed kit makes the FD RX-7 look a bit like a Dodge Viper, and that was my first thought too. The way the fenders swell into the boat-like front end and the various angry vents and grills scream American muscle. I love the way the front fenders flow into the side skirts and into the rear quarter panels.

The rear, I’m not so sure about though. It also adds width to each side (around 50mm), but unlike the front doesn’t flow into the Mazda’s factory lines. It incorporates a boxy vented section which does let air flow through, but also does a fantastic job of collecting stones.

Walking around the car, there are a few details that Takumi-san has customised himself. He’s fitted his own LEDs into both the headlights and the M&M Honda rear brake light box, and created custom stems for the JGTC NSX-style side mirrors. Takumi-san also designed the stays for the Esprit 052 1,800mm adjustable GT wing.

The wheels are gorgeous BBS RI-As in a 18×10.5-inch fitment at all four corners, wrapped in Dunlop Direzza ZIII semi-slicks.

Even though the exterior looks pretty wild, Takumi-san tells me there’s no immediate plans to go crazy with the mechanical side of things. For now, the FD3S’s original 13B twin-turbo rotary engine remains stock, save for a GReddy intake elbow, Blitz blow-off valve, stainless exhaust system and an A’PEXi Power FC engine management system. But that’s still 300+PS in a car that doesn’t weigh a whole lot.

With Panspeed coilover suspension and a low seating position, it was a pretty wild drive around the twisties.

The idyllic surroundings were a treat, but they weren’t the only reason I had coaxed Takumi-san out into the mountains. I had another motive – monkeys. Even over the rasp of the FD3S and the burble of my GC8, I could hear them rummaging through the forest along the roadside.

From an out-of-the-way parking area, you can walk down a closed road and along a forgotten area of the lake where silence washes over you, until you reach a tunnel.

Walking through the tunnel you immediately enter a Japanese monkey kingdom.

There’s a different kind of traffic here, troops of monkeys playing, jumping and climbing without a care in the world.

My first encounter with Japan’s fury little primates was back in 2015 when I tracked deep into the mountains of Nagano to visit the snow monkeys. They spend their winters soaking in the hot springs, and are an absolute must-see for any animal lover.

These monkeys at Lake Miyagase are much wilder than the snow monkeys – who are so used to flocks of tourists that you can get right up close – so you do need to keep your distance.

Good company, fun driving roads, a wide-body Mazda RX-7 and wild monkeys all on the same shoot – this is why I love living in Japan!

Appropriately, the final shot should be some monkeys peeking over the rotary.....hahahaha

Thank you for the great article, Toby

Just shows you how beautiful the original stock FD is, and how hard it is to maintain its looks let alone improve them. Lots of work in this project and I appreciate whats involved in making the changes. But it is a real challenge to create a modified FD that carries on from the original organic shape.

That's exactly what I was trying to say, in a round about way. You've summed it up perfectly!

Great feature! Some great shots and I loved the variety in topics with you somehow managing to relate monkeys to FDs, lol. Personally I like the RE-Amemiya tail light covers and think they would flow much better with the car but I still love the car. Couldn't help but notice all the bikes at the parking area too 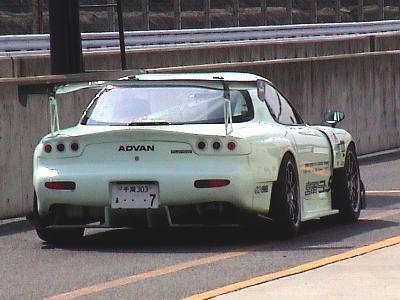 Love me some rotary power, though I always find it sad to se the pop-ups go haha.
I really enjoyed seeing some scenery and wildlife as well, makes you feel the atmosphere, so keep that up Toby!

The FD RX-7's design is timeless. Even today it still looks elegant!

One of my favorite articles! Amazing photos and writing, well done!

This article is wonderful. As much about a rad yellow car as it is about a trip to the mountains to find both beautiful tranquil landscape and wildlife. It's great!
Also glad to hear your GC8 is running smooth!

It’s all about balancing your monkeys with your bananas

Man that kit on the RX7 looks so good!
It makes the car look newer for today's standards

I think less Viper and more Banshee from the GTA series when I look at the front.

This car ain't great, it ain't brown like me innit.

Someone buy my GRMN iQ

but I'm pretty sure those are Ferrari F430 taillights!

or maybe I'm completely wrong and those are Lotus Elise taillights! haha

Takumi !!! He is driving wrong car or maybe is real name is Takahashi...LOL