Like many countries around the world, South Africa was, for a long time, denied some of Japan’s most iconic performance cars. Government sanctions effectively banned them. But thanks to the efforts of people like Himal Paul, what was once a JDM dream for South Africans can now be a reality.

I recently caught up with the man behind Rospa Imports, a company at the forefront of bringing JDM performance cars into South Africa legally. Arriving at Himal’s house, where some of his stock is kept, I was greeted by a pretty impressive sight.

Before meeting Himal, I assumed that to make a business out of importing some of the most sought after cars from Japan, he must have always been a big JDM guy. Surprisingly though, that’s not the case. Yes, cars have always been a big part of Himal’s life, but it was by complete chance that he had his first encounter with a Japanese domestic market car – an FD3S Mazda RX-7.

Himal was meeting the Mazda’s seller for another reason, but was intrigued by the car’s look and unique twin-turbo rotary engine. He couldn’t afford the RX-7 at the time, and by the time he could, it was long gone. But Himal didn’t stay JDM-car-less for long.

Despite still longing for an FD3S, a Mitsubishi Lancer Evolution IV caught his eye and with cash burning a hole in his pocket he got the deal done. Unfortunately for Himal, what he didn’t realise when purchasing the Evo, was that it was registered with Lesotho (a neighbouring country) plates, and therefore was actually illegal to use in South Africa. By this time though he had been driving the Mitsubishi for two years, so he simply sold it on and set his sights on finding a legitimate JDM car locally. That was easier said than done, though.

It was at this point that Himal figured out the best way to get his hands on used Japanese domestic market cars like RX-7s and GT-Rs, was to go direct to the source – Japan. He also figured that there was a real business opportunity here.

Himal did his research, secured a supplier in Japan, started advertising his new venture locally, and ended up purchasing two cars – an R34 GT-R for his first client, and an R33 Skyline GT-R for himself.

As soon as the cars landed in South Africa, Himal was inundated with requests for other JDM machines. The Skylines had been brought into the country in a legal but unofficial kind of way, so he knew he’d have to formalise the importation and local registration process moving forward. Once that arduous aspect was worked through, Rospa Imports was in business.

Himal wasted little time getting himself over to Japan to soak up the car culture firsthand. He visited auction houses, dealerships and even a few tuners, returning to South Africa with a real understanding of the Japanese side of the industry. He also now knew how he wanted to structure his business.

While some cars would be purchased for inventory, he envisaged that the bulk of the vehicles passing through Rospa Imports would be to order. This not only entailed Himal sitting down with clients in South Africa and looking at upcoming auction stock online, but also travelling to Japan on a very regular basis to check out cars in person. This then grew to offering modifying services that were undertaken in Japan prior to vehicles being exported.

Taking this one step even further, Himal started taking clients with him to Japan, allowing pre-purchase test drives and an opportunity to soak up the culture. So far this has included motorsport – F1 at Suzuka, D1 Grand Prix and plenty of grassroots drift and circuit racing events – shop visits and of course Daikoku PA. One vehicle was even bought directly from Kato-san at Liberty Walk; a detail that Himal only revealed to his client when they arrived at LBW’s HQ outside Nagoya to pick up the keys from the man himself ahead of a post-purchase road trip.

While the car’s at Himal’s house were amazing, we headed over to a warehouse where a few other vehicles he has imported are stored.

This stunning BNR34 Skyline GT-R VspecII Nür has travelled only 30,000km, and it shows.

You can never go wrong with RAYS Volk Racing TE37SL wheels – especially when they’re attached to a mint VspecII. This is another car that was road-tripped around Japan by its South African owner before being exported.

Since starting Rospa Imports, Himal’s main focus has been Japanese cars, but more recently he’s branched out into Euros, especially BMWs. These have so far included E30 M3s, an E36 GT, E36 GT2, an Alpina C2 and more.

He also managed to beat Volkswagen South Africa to the punch when he brought the first Mk8 Golf R into the country last year for a local tuner. It caused quite a stir, as VW SA thought it was illegally imported, but it’s just here temporarily on a Carnet De Passage.

Sadly, not all cars are able to be imported for legal road use in South Africa. To be eligible, the model must be deemed ‘collectible’, but what is and what isn’t is somewhat subjective. A good example is the JZA80 Mk4 Supra. This model used to be on the collectible list, but for whatever reason it’s now not. Some say that Toyota South Africa complained to the government that Supra imports were affecting the sale of new Toyota 86s, and the result of that was the A80 being blacklisted.

Other popular performance models unable to be registered in South Africa include S15 Silvias and Toyota Altezzas. Of course, they can be imported for track use – and Rospa does do this – but it’s a pretty limited market.

Himal obviously benefits financially from this business, otherwise he wouldn’t have been able to make a living. But at the end of the day, he genuinely loves being able to bring some of Japan’s performance car icons into South Africa and make those JDM dreams come true for a growing number of local enthusiasts.

Wow that's a pretty cool collection and nice house too!
They go together so well!

I'm DONE with SH. I used to really love looking at all the stories and cars from all over the world but it seems like just about EVERY story is about Japanese cars. I'm not a huge fan of JDM. I don't dislike Japanese cars just don't understand why they dominate this site. Been into German cars for over 20 years. So GDM is a slouch compared to JDM.? Stop it! Porsche is the greatest marque of all time! You should rename this site JDM Speedhunters. It was fun but I'm finished. Take care.

1. announcing you're "leaving" a free blog is a bit odd behavior.
2. there are any number of other sites to view modded Porsche's, if that is your thing. It's borderline saturated at this point. The JDM stuff was once saturated too...and now, SH and a couple others are the last standing.
3. There's no way you've spent considerable time here as noted by others.
4. There isn't a single blog out there, anywhere, that covers the sheer amount or diverse range of cars/events in the world. Why? They have the budget to do so, and the staff available. But, if it's so overwhelming that you can't stand to be here, why not start "David's GDM Bestest Car Blog"? Surely you can run SH out of business if the coverage is so severely lacking? Glass half empty? Or glass half full?

You sure you follow this site?
January is JDM month...hence the massive amount of JDM goodness this past 4 weeks.

Otherwise, there is a stack of Non-JDM stuff coming through on the regular.

you do realise that since day ONE Speedhunters set out to showcase Japanese cars & culture???
Seeya!

That's kind of like walking into McDonald's and complaining there are too many burgers on the menu. You do realise this is free content beautifully photographed and told, right? You also realise you don't have to click on the article, right? I don't like drift stuff, so I don't read it. I for one am grateful there aren't pop up banners, modals, and subscription requests distracting me every two seconds.

Life is too short to be this disgruntled David. Hang in there buddy, I'm sure some German stuff will come along soon.

Some epic cars and quite a cool story to get to where he is today. Having my GTR in Cape Town would be an absolute dream

Still JDM cars and my ex-wife is Japanese had been together and still friends for over 20+ plus years. The cars are an added bonus in my life the culture takes more presence in my life. 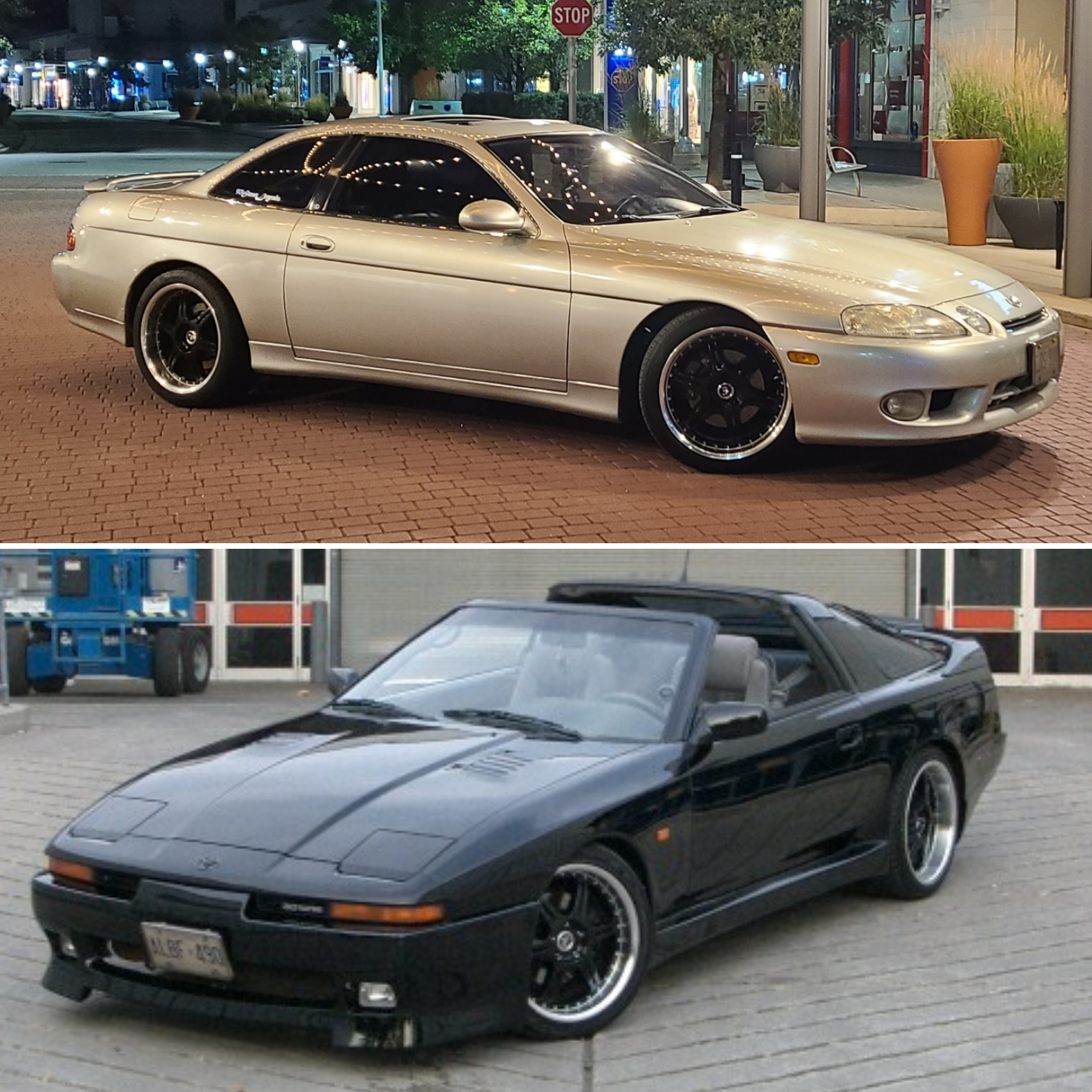 "actually illegal to use in South Africa. By this time though he had been driving the Mitsubishi for two years"

No offense to the owner, but how do you not realize this sooner? In the US you have to register the car and get it insured. If the plate's not correct then they'll tell you immediately. If it's wrong they'll impound your car, or worse, crush it . Also, why not just register it in South Africa? Was it because it was never federalized in your country?

It can come true

....until their prices skyrocketed once again...

Great read Stefan! I enjoyed it and learned from it, it was a great house but the cars were even better. I agree with your argument saying that these cars are becoming rare, and high value. it was entertaining and hearing a relatable side from the car culture was refreshing.