This time last year, most Japanese car enthusiasts were sulking at the fact that Covid had cancelled the 2021 Tokyo Auto Salon. It left a bit of a void, as for longer than anyone can really remember, TAS is how we’ve kicked off the year.

As disappointing as it was, soon enough everyone just got on with things. Whatever cars and products were bring prepared for a Tokyo Auto Salon debut were either soft-launched online, or put back under the knife.

And this extra year to play with was exactly what some needed.

Many of the people I caught up with on Thursday night at the Makuhari Messe during the final hours of TAS set up shared the same sentiment. At this point I’d barely seen a fraction of what’s on show this year, but overall it seemed that the extra 12 months came in handy for a lot of companies.

It not only gave Nissan a chance to hit enthusiasts with the first unveil of the final version of the massively anticipated all-new Z, but chase that up by showing for the first time at a public venue the Super GT version of the car. That’s right, the GT-R is no more in GT500 – all hail the Z!

It sort of feels like 2004 all over again, when the (VQ30-powered) R34 GT cars were eclipsed by the Z33s for a few years while Carlos Ghosn was busy saving Nissan and making sure Mizuno-san had enough time and budget to make the R35 a reality.

I wonder if a GT-R will once again replace the Z in Super GT a few years down the line?

On the subject of race cars, Toyota last week told the world that it would present a GT3 race concept, and here it is. Well, on Thursday night the car was still covered up of course, but it will have been unveiled by the time you read this.

Behind are two GRMN versions of the GR Yaris, but again still under wraps. I actually managed to see them uncovered while I was doing an Instagram livestream, and they look laden with carbon fiber and lots of other upgraded goodies. They’re not actual competition cars, but more ‘rally-inspired’ builds, one dressed for tarmac and the other for gravel. We’ll definitely go into more detail on all three cars over the coming days.

I was pretty pumped to see this crazy creation by Racing Factory Yamamoto. Underneath those pumped arches – and what remains of the Nissan Figaro donor body – is a custom-built tube-frame chassis.

This is not a styling exercise, this is an exceptionally well built race car. I only needed one glance to realize that it’s been meticulously planned and executed.

Power? That comes from a Honda S2000 engine! It’s totally crazy, so we’ll definitely have to shoot a full feature soon.

Over at the Hashimoto Corporation booth, things were still coming together. I pored over this Guards Red 964 running KW suspension, and thought about how cool it would be to have Project 964 on show in this same space sometime in the future. Let’s pencil it in for 2032, it might almost be done by then!

In case you missed the memo, 2022 is the year of Gazoo Racing, the new 86, the Yaris, a few LC 300 Land Cruisers, and of course the A90 Supra which continues to generate interest.

Now that the latest-model M3s and M4s have been flowing into Japan for a year or so, we are beginning to see the first JDM-tuned examples.

I really need to check out what Studie has been doing with this new platform.

Another trend I quickly noticed is Lexus LM face/rear swaps on Toyota Alphards. Since Lexus does not (yet) sell the Lexus version of the Alphard/Vellfire in Japan (why, nobody seems to know…) the tuning industry has done its thing. And this was my favorite by a mile – the Yokohama Wheel demo vehicle built with Artisan Spirits and running the new Oni 2 three-spoke wheels.

Out of all the LC 300s I saw, Blitz seem to have done it the best. A simple lift kit and off-road-ish wheel/tire package has elevated the look of what is currently the most sought after new vehicle in Japan. If you order a Koenigsegg or a Pagani, you might get it quicker than a new Land Cruiser. Potential buyers are being quoted a four-year wait now, which is completely ridiculous.

I didn’t want to get too close to the Varis cars as they were still being polished up, but there looked like a lot of new carbon coolness.

RAYS too has plenty of new wheel designs, including the Volk Racing 21A. Yes, please!

The GT-R world keeps thundering on, and by ‘GT-R’ I mean the RB26-powered cars, not the R35. HKS was hiding a few nice surprises with two display engines, but what caught my eye was this unsuspecting black R34 at the Crewch booth.

The 700hp, fully-built 2.8L RB has been mated to the dual-clutch transaxle transmission from the R35, which you can see here, poking through the floor. To make it all work, a MoTeC is linked up to the R35 ECU and apparently it all works smoothly, paddle shifters included. It’s basically what Nagata-san at Top Secret did with his R32 years back.

Crewch are also displaying a pristine and totally OEM KPGC10 Kenmeri GT-R – the real deal, not a replica. These cars will soon reach the US$1 million mark.

Not too far away was Miura’s lineup, one we will touch on with more detail over the course of the weekend.

And it was cool to see NATS at TAS again. Their crazy students have been busy creating their usual Frankenstein builds.

Kansai Service was busy putting together another tantalising lineup of demo cars.

I was also very happy to see Lotus continuing to acknowledge the importance of the Japanese market and the massive number of fans they have here. For TAS, they sent over one of their pre-production Emiras, and I have to say it looks stunning. I’d love to take one for a quick night drive/shoot around Tokyo.

On the far side of exhibition center was yet another hall filled to the brim with cars.

This is where BH Auction were displaying a couple of the cars that they are auctioning off this year, both from the Taisan collection – the Group A R32 GT-R and the F40 LM. Do I hear some opening bids?

Do you remember the Daddy Motor Works GR Yaris-powered AE86 I went to check out last year? Well, it’s done, and just in the nick of time.

Oto-san has really outdone himself, but I also need to acknowledge that his Yaris was sitting next to a true legend. I featured the Spoon Sports NSX-R GT 11 years ago, and it looks as good now as it did then. Perhaps even better.

I hope you’re as happy as we are that the Tokyo Auto Salon is back. As Toby and I explore more of it over the weekend, I’m sure we will find plenty of gems to share with you guys, so make sure you check back soon for lots more.

The Tokyo Auto Salon on Speedhunters 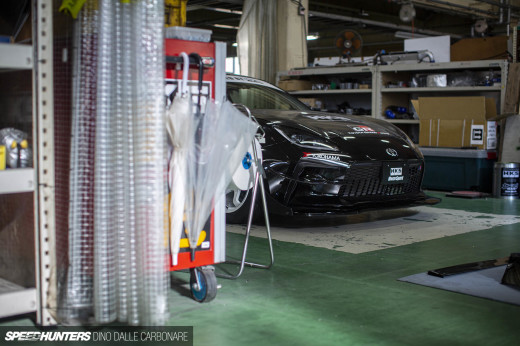 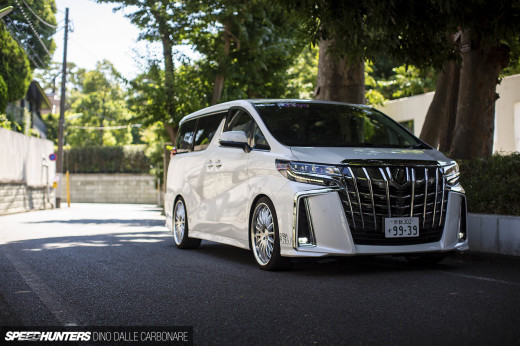 Big Big love for that new Nissan Z Super GT in prototype/testing black and big checker carbon !
Oh and i will take that Blitz LC please love it !

New Z is too dope! This car will bring great things to the industry

I want to see that Super GT Z too!

Wowwww so much to take in!! I would love a follow up on that GR Yaris powered 86 if possible. Looking forward to more!

Keith check it out in my second post from TAS

Also that red Figaro is absolutely wild! Love it lol

can someone explain the wheel arch shape on the super gt cars? i dont understand the need for the size

They run lower when on track.

That LC 300 Land Cruiser is awesome! I had no idea the wait was that crazy...

I noticed a thing about LC300s at TAS. All the lifted ones had positive camber. Looks like nobody is looking at fixing geometry once adding 3-5 inches of lift

Hold the phone, is that the Volk Racing GT-C deep dish wheel i see there ? Wow, that wheel went out of production years ago, didnt it? How cool to see that it´s back. I am rather interested to see where the GT3 concept it headed, as GT3 cars must be based on road going cars. Also, how awesome is Toyota´s lineup of sports cars ? Incredible to see how much Toyota is currently doing for the enthusiasts. Looking at you, Honda !

No, that's the new Volk 21C. Design does look similar to the GT-C. Probably inspired by it.

More of the red Celica pleeaase ! !

Thanks for the coverage. Loving the figaro and what appears to be a Honda Stepvan next to it, although some of the body looks like it is a Frankenstein build with newer panels, maybe a current Suzuki kei van?!

Looking again at the swage lines I guess it’s a current Honda N-VAN with a stepvan front end. Lovely.

More coverage of the Kei trucks/vans/cars and of the off-roaders please.