SHARE GT-R vs Supra (& More) In The TAS Car Park

In reality, it’s minivans or kei cars of course, but for the sake of this story, let’s dive back into our fantasy land where performance always trumps practicality.

In this case, without a shadow of doubt the most abundant high performance vehicles I spotted over the two days I walked the aisles of the Makuhari Messe car park was the Supra and the GT-R. I’ll let you decide which is king and which is queen.

Note; I wasn’t sure what my story angle would be when shooting this and my first TAS 2022 car park post, so after the 5th Supra spotting I stopped photographing them. But I counted over 10 MK4 and just as many A90 as I did my rounds.

The GT-R, both in Skyline and R35 form, was another car I got tired of snapping (not a bad problem to have, I know). Given their values, I began wondering why there were so many of them knocking around a carpark with family cars and grocery-getters…

Aside from the obvious – this is the TAS carpark, and people just love driving these things – I think it’s pretty safe to say that the risk of damage to your ride is much lower in Japan than elsewhere. For a country where most people have a garden the size of a single bed, parking spaces tend to be pretty big, and usually have double wide lines between each space, meaning that door dings are somewhat rare. And the Japanese are quite cautious drivers too; I’ve only seen two accidents over the past two years of daily driving.

Of course, it wasn’t all GT-Rs and Supras, there were plenty of other Japanese performance icons parked up too.

Something else I noticed was that the majority of cars were in really great condition, and mostly just lightly tuned.

There also wasn’t an abundance of crazy wide body kits, vinyl wraps, outrageous wings or wheel spacers as thick as a can of spam, as we’ve seen in the past. I’m not sure if this means that people’s tastes are changing, or the owners of those sorts of cars simply stayed away or brought their daily drivers along instead this year.

Regardless, I hope you’ve enjoyed the great outdoors at Tokyo Auto Salon 2022. Stay tuned for my next post – Japan’s biggest tuning show through the eyes of a TAS first-timer.

In response to your question about why tuning is getting more conservative, my theory is that performance car tuning captured a generation of young people in late 90s/early 2000s. As they've grown older, styles have become more conservative.

I tend to agree!

I'm starting to feel as if stock is the new modified and a lot of owners of these Japanese sports cars are starting to want to have them closer to stock form. Even I'm feeling this myself, that I'm more interested in keeping my WRX STI stock instead of modifying it. Maybe times are changing and/or owners are just maturing.
Also maybe people are getting tired of the same boy racer look on most of these cars.
Anyways just my thoughts haha

Those are Mazdaspeed MS-02 wheels, made by Rays, very desirable.

Thank you! I'll add them to my list of rare wheels I'll probably never find haha

Awesome to see the C34 Stagea featured in one of your shots Toby! Its a shame that you don't see too many of the M35 Stageas around in these sorts of meets. Awesome shot none the less!

I tend to agree with Lee and Tyler that tuning seems to be becoming more conservative, maybe its because as the generation that got to play NFSU and NFSU2 and the whole host of games in that genre got the wild and out there style out of our system on the games, and now that we are in the "adult money" phase of life, we just want something simple.

For me, I currently own a 2002 NM35 Stagea, and will be keeping it relatively stock body, just a nice wheel and tyre combo, and then focus my money on the engine, some more power and reliability.

And lucky to find it parked with a family member!

Yup: being attention thirsty is dead, even tho it was never a "new thing". Finally the internet mimics society again and flattens out all nails that stick out because it's all been done now. It's high time for cars to be what they always were as this new infrastructure starts to kick out the status chasers and wannabes and etc garbage/souless sheeple. As with books or archery or whatever ancient world-ruling tech becomes obsolete, what's left is the nerds and passionate to enjoy basically anything outside of museums and re-trending-"vintage" for bargain prices. Currently, we gotta weather this swan song storm as sheeple pretend to lament the passing of the ICE age, "rebel" like petulant b1t3hs, drive up prices by hoarding and being greedy like pokemon cards as they "secretly" daily a crossover-suv hybrid or BEV anyways and love every second of it. Our time will return, but with empty c-roads and uncompromised sport cars made from the best the future has to offer. See you there with a central-seated, future-engined, Stratos-Dino-LeMans mashup made from carbon, super alloys, and super fabrics. In manual. And I don't care to "race", but to simply drive... If you're real about this, drive w me too.

I’d suggest a few things. Firstly, it hit a saturation point long ago, and became watered down. While the movies, the magazines, and more, made it far more accessible, it also attracted people who were only in it because it was a new “scene”. Secondly, and as the original generation of people who were into this stuff in the early to mid 90s gets older, many tend to gravitate towards higher end cars, which aren’t modded. Third, the types of cars that made the hobby take hold, became progressively more expensive to buy in the first place, leaving less money to mod, and thus less demand to do so. Lastly, and I think most importantly, is the rise of the fake parts. As brands that poured r&d and manufacturing costs into products get consistently ripped off, their market share erodes, leaving less to continue development.this also directly relates to #1.

It’s great though to see the staple Japanese and euro brands re-embracing some of the cars that got us here, and now beginning new or reintroduced parts.

Quite a few, check the third last pic

Might be Japan but the owner of that Supra an't taking any chances! 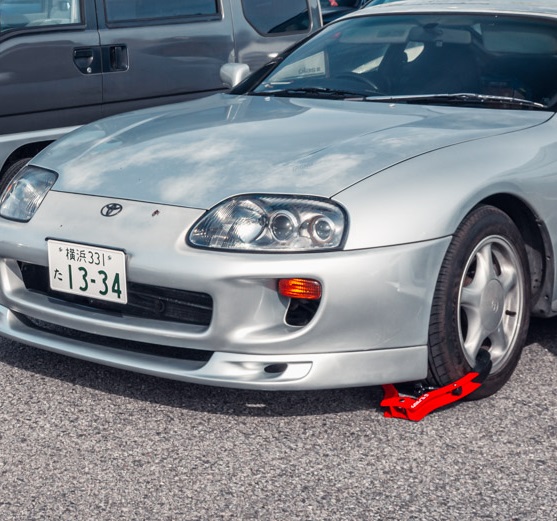 I’ve been waiting for someone to spot that!

I can tell you first hand that "conservative" tuning is basically "broke af" tuning. I have a house, two businesses, and four children for whose future I am growing a property portfolio. All my cars are in the shed and the only one running and regod is a dead stock 180 that I bought back when I was much younger.

Believe you me I would love to resurrect the Evo or GTR, but I just cannot justify the cost when I think about one or two of my kids having to miss out on opportunities just because daddy wanted to race again.

Another theory of why tuning is getting more conservative: Effects of the bubble economy bust is still felt to this day. Wild ideas can't happen without all that surplus cashflow. Think about all the wild and crazy things you did when you had a cheat code for unlimited cash in Grand Theft Auto or Sims and the like...

I'll be the billionth person to say this, but the there is no comparison between the R35 and the A90. No contest. The R35 is God tier, along with the other Skyline chassis. The A90 is a glorified 86 with a nice inline-6. It certainly doesn't compare to the Mk4.
/rant