According to Google, I’m currently sat 7,944 kilometres away from Las Vegas. That’s 4,936 miles for those of you not fluent in metric. Why am I writing about an event in Nevada from distinctly not Nevada? Covid restrictions, of course. Simply, I couldn’t travel trans-Atlantic for the 2021 SEMA Show.

Curiously, I can fly out to the United States next week, but I don’t think Uncle Joe got my message that this week would have been much better for me. So much for honouring his Irish heritage…

In all honesty, I am genuinely saddened not to be in attendance this year. My last visit to SEMA was in 2017, where I charged a $35 bowl of room service breakfast cereal to Ben Chandler’s tab before jumping on a flight back home.

Instead, several of us are offering international support to our US-based contributors, both new and old. For my opening contribution to our SEMA coverage this year, I’ve been paired up with the suspiciously Irish-looking Trevor Yale Ryan. The man is only a green top hat away from being caricatured on a cereal box, but denies any Irish ancestry. I remain skeptical of his claims.

However, the ‘not’ Irish TYR has a sharp eye for a good car and knows how to mix things up.

While we (that’s you and I, reader) are going to have to experience SEMA vicariously this year through Trevor’s lens, he has provided some extra detail and insight that might not be available from the photographs alone.

As you might have guessed from the opening images, this post will focus heavily on the show car side of things, and in particular on cars equipped with Air Lift Performance suspension.

While our favourite Michigan-based brand didn’t have a booth this year, their products have become ubiquitous with this part of SEMA and beyond.

I know that show cars aren’t for everyone, but here’s how I see it: Show cars should be appreciated for what they are, rather than being criticised for what they’re not. For me, these cars exist to showcase limitless creative freedom while regularly serving as prime examples of world-class workmanship. That’s where and how I extract my joy from these cars.

It helps that they’re quite easy on the eye to boot. Take Mush Alkarkhi‘s LTO-equipped E30 BMW as an example.

While most will be familiar with Khyzyl Saleem’s renders turned to reality at this point, it makes them no less impressive, especially when builders go all-in to create complete builds.

There will be more on this car in a future feature, but for now you can enjoy this turbo S52-swapped E30 with an estimated 800hp parked up on the Las Vegas Convention Center’s questionably patterned carpet. I say questionable, but I would love that on my living room floor.

The wheels in particular have an interesting story which involves scanning the original faces in order to recreate them in completely custom sizes and offsets. I’m also curious if the colour-coded dressing in the engine bay is carbon-Kevlar or carbon fibre with yellow/gold fabric. I digress… onto the next one.

A more contemporary BMW example this time, with John Lau‘s BMW M2. This is a wild-looking car that sort of looks like it shouldn’t exist in reality.

The kit is a carbon fibre Darwin Pro wide-body product that was fully moulded to the car before being painted a Ferrari shade called Avio Metallic, but with extra flake and 13 layers of clear-coat.

With standards higher than ever before at SEMA (or perhaps builders just made the most of the year off between the last event), it’s not surprising to find a very non-stock interior in place. The carbon Recaro Podiums are the first set in the United States, and while they dominate the inside of the BMW, they suit the overall theme of the car. I’m not sure they would work as well in say a relatively stock car, but paired with the rose gold half-cage, they’re right at home.

I will always appreciate cars being able to run decent tyre setups courtesy of air suspension. This is what it has always been about for me, the best of both worlds.

Performance has been addressed too, with an estimated 600hp available. However, there’s talk of a built motor being next on the cards.

Let’s break away from Bavaria for a bit and go right to the US West Coast with this Mustang Mach-e California Route 1 created by Tjin Edition.

Okay, the name is a bit of a mouthful, but it’s interesting to see what can be done with these all-electric platforms.

22×9.5-inch Vossen ML-R1s are fitted with 265/35 Falken Ziex S/TZ05 tyres, with the bodywork being brought down to earth by Air Lift Performance struts.

Lifestyle and how cars are actually used seems to have been a theme on the Ford booth, as this teal-coloured (actual) Mustang demonstrates.

It would be a neat car to go surfing in, but seeing as I’m allergic to the sea I’ll just settle for burnouts in the car park instead.

The last car I’ll cover in (some) detail before assaulting your eyes with a gallery of awesome is Aaron Stehly‘s Mk1 Golf, as found on the Wavetrac stand.

The car is due a feature soon in a prominent magazine, so we won’t try to steal their thunder by scooping them, but I’m all about this sort of build.

It’s typical Volkswagen, which is not to say it’s any less impressive. The standards set within the scene have always been so high, and this adheres to them and then some.

The project started as a bare shell some 11 years ago and was only finished for SEMA this year with the help of some friends.

Inside and out this Golf is glorious, and it’s a car I would have loved to have pored over in person. Sublime.

I know we like to joke about #bluetoothdriveshafts and some of the other negatives of SEMA, but the good far outweighs the bad and cars like this are a reason why the event is held in such high regard around the world.

As for the rest of the cars in this post? We could probably go into thousands of words on each of them, but a deadline is a deadline and I’m sure the team would like this to be wrapped up before SEMA 2022 comes around. It doesn’t mean they’re worthy of any less praise, and believe you me, I’ll be studying each one just as hard as the cars above.

There’s a lot to digest there, and we’ve included even more of Trevor’s hard work in a bonus gallery below. That big ol’ turbo Country Squire caught my attention, as did the Polaris Slingshot with a Corvette-esque exoskeleton and LS3 swap. I wouldn’t be averse to that last pick-up truck either.

Even from 7,944 kilometres away, I’m still feeling the effects of the 2021 SEMA Show. Not the heat or exhaustion, but that overwhelmed-ness that comes over you as you’re exposed to car after car after car. I think I need a bowl of cereal to wind down. Ben, can I borrow your credit card?

Battery electric cars in general tend to look like full-size versions of Transportation Design presentation models, missing all the little details that make cars "real" to us like grilles and turn signals and such, and because of this they give off this Uncanny Valley vibe with their overly clean lines and antiseptic surface geometry, kind of like the android in the sci-fi movie with the rubber skin and the unblinking eyes.

They trip all of our subconcious bullshit detectors.

If it's any consolation, it was the greatest bowl of Rice Krispies I've ever had.

It's a frunk, and it's been called that probably well before you were born. Ask the Porschefiles.

Ye're both wrong. Everybody knows it's a froot (front boot)

I imagine there were many people out there cringing, yelling, flat out pissed off at ford for making a mustang mach 1 electric.

Saw that E30 at Princeton airport 3 years ago. Love that MKI Golf! Was in Vegas 2016. Got there the day show closed. Whole bunch of muscle cars(the real ones, not these stupid "retro" ones) stormed down Las Vegas Blvd and everybody stopped. It was crazy! Here's pic of that E30 I took at Princeton show. 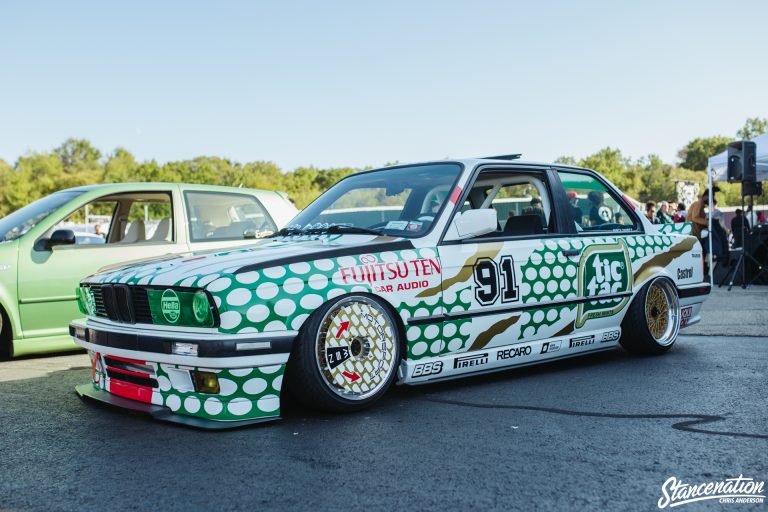 I laughed out loud at charging a $35 bowl of cereal to Ben's hotel tab!

paddy, you remain the best writer on staff by a wide margin. keep it up.

Thanks mate, but if you saw the absolute drivel I submit you would realise that Brad is the real unsung hero around these parts!

I would never had guessed that was a Slingshot, the 4 wheels threw me completely. Pretty damn awesome.

I thought it was a Vette kart of some sort at first. Odd, but brilliant.

The problem that draws hate isn't show cars or air suspension, it's increasing peer pressure killing off individualism.
Most cars you see around the community are in the direction of broken axle looks (super low/excessive camber), too narrow tires, maybe a wrap and probably a broken-sounding exhaust because apparently loud -> Good

We need more of that Maverick that was glimpsed in a recent story! So cool looking.