SHARE Salvage To Savage: When This Baby Hits 88mph…

…You’re gonna see some serious sh*t. That’s how it feels at SEMA anyway, regardless of your speed.

When I first saw Tim Moceri’s DeLorean DMC-12 I honestly wasn’t all that taken with it, though. To me, DeLoreans have always seemed wild enough on their own, so why bother with cutting one up?

And yet, I found myself returning to this car over and over again throughout the show to grab a couple more pictures. Each time I did, I liked it more and more.

After chatting with Tim and the Salvage To Savage team and learning that the car was previously finished in red and had been T-boned, the project just made sense. By now I was fully sold and wanted to learn more.

As Brandon touched on in his first gallery from the Toyo Treadpass, the car began as a render by Khyzyl Saleem. As you can see from The Kyza’s post here, the build was actually executed to a pretty complete level based on the concept. Even the blade-style headlights and active grid taillights were carried over.

Under the rear louvers, you’ll be glad to see that the car’s original (and wimpy) 2.85-liter V6 that was developed collaboratively by Peugeot, Renault, and Volvo is long gone. In its place is a 5.2-liter GM LS V8 fed by twin Garrett turbochargers that hang below the rear bumper, true to Khyzyl’s vision. Vibrant Performance components and materials were utilized throughout, and the engine runs off a Haltech ECU.

Some of the fit and finish isn’t quite to ‘show’ standard, whatever that means to you, but I just don’t care on a car like this that was essentially saved after taking extensive damage.

Tim says that eventually the wide-body kit will be remade in carbon fiber, and more refinement can be done at this point if he so desires. The modified KW suspension in the car will also be reworked in the future to incorporate an Air Lift Performance air-ride setup for the best of both worlds.

To me, this is a completely out-of-the-box take on a classic with a cult following. It certainly won’t be to everyone’s tastes, but it definitely won me over by the time I left the show.

The 2021 SEMA Show on Speedhunters

Doc Brown also modified his DeLorean, I don't see why anyone can complain about this one.

Look, if you're gonna put big fenders on a DeLorean, you gotta go whole hog and do those big rear exhausts. 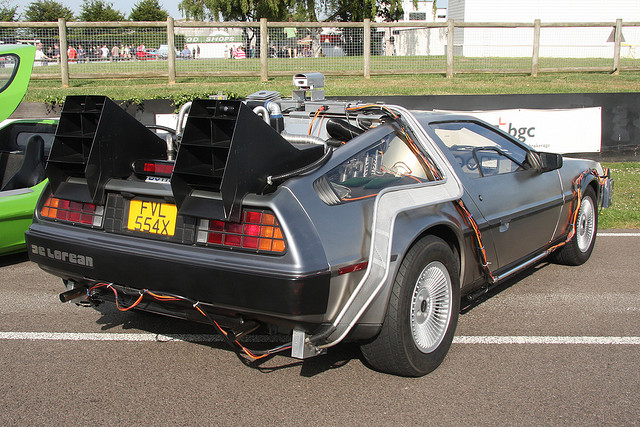 I truly appreciate this piece of kit,only thing i would change is to close the gap between the intercooler and that opening in the frontspoiler
Perhaps make an opening in that hood as well to let the air out there is plenty of room to do so

That's the radiator, it has the intercoolers mounted in the engine bay which I believe are fed by intakes in front of the rear fender flares

I'm being torn apart by this creation. It is eye-catching and intriguing, however this thing is more sculpture with wheels rather a car. Which is very sad since I believe that every car deep in it's soul really wants to be driven.
It is upsetting to see a turbo inlet functioning as a vacuum cleaner for all the road debris being shot behind the tear wheels... Or is this the new sustainable way to reduce pollution?

The execution on this screams "I needed SEMA 2022". Interior especially has some nice but poor choices, and just poor choices, along with some of the most slapped on exterior pieces that would make a plastichrome vent addict cringe. Someone introduce these cool guys to clay or 3d printers.

Hope to see more of these thematic builds finished for '22! Even in this shape, it's a sight for sore eyes.

Love this build. And I recommend wathcing the build series on YT. I really like these guys.

Them turbos hanging so low to the ground.... One curb or speed bump. This is just an eye peace. 88MPH my a**. Cant see it going more then 5. Great fabrication and the design is somewhat ok. But the interior and all in all actually usability is making me meh...

Such a perfect one. I think DeLorean, being a very well-designed and awfully engineered vehicle, begs for modifications. The only thing I wouldn't do is a turbo hanging in a couple of inches over the ground.

Totally agree, amazing build other than turbo location, and I actually like the non-cf construction of the guards as it's so very 80s. Why not ditch turbos altogether and have a high revving ls7 style build? LS' sound mint in a mid engine application as you can fit an 8-1 and substantially increase the pitch

Seeing an exhaust that has had hours of welding put into it to look cool being right next to an turbo that is connected to nothing is why so many people hate SEMA 'builds'. Things are built to look good and not actually be practical.

What's the point of SEMA builds, to show off your welding skills? Who cares if what it's attached to doesn't work.

Yes, a big part of SEMA is showing a shop or individuals fabricating skills. It's difficult to find that level of exposure anywhere else.

But they are connected, the pressure tube runs up through the pontoon to the intercoolers. Watch the build video

He is referring to the photos above where they are not.

Those are Ticon mufflers, not Vibrant as stated was used throughout… those must be daytime run LEDs, what output wattage are the LED drivers rated for? don’t see them getting much visibility at night.

Very cool idea but overall comes off very disjointed. Body is fine, forward lighting though cool, makes little sense and a similar result may have been achieved with actual functionality intact (something similar to hyundai's pixel lighting). Interior is the biggest offender and looks tossed together with whatever Status parts were available and does not show any creative link between the exterior at all. While Status makes nice parts, none of them go with this style exterior.

It’s definitely slapped together, but the wide body and headlight do look pretty horn. I suppose if we consider it a ‘work in progress’, it has the potential to be finished well. The interior I think would be a million times better just being all black without the pinky red highlights. I like the visual ideas of the turbos hanging out, but maybe moving them to a central area like you see on those Lambos might end up being more functional

The car used to be red...
Wasn't the rule of thumb that any painted DeLorean had been crashed and they painted it to hide the changed pattern in the metal?