SHARE When Discretion Is King: A Cosworth-Powered Mk2 Escort

As you might expect, there’s no shortage of Ford’s famous Escort on Irish shores. In fact, you could probably dedicate an entire website to them. Although having Escorthunters.com in your web history may raise an eyebrow or two.

There are a lot of Ford Escorts in Ireland, and in particular the second generation Mk2. A reasonable person would assume that this is almost entirely down to the car’s rallying heritage, and they would be correct.

I love the Mk2, and I also love the Mk1. I think they’re wonderful cars and I would love to have one. My only teeny, tiny issue with them is that, provided that they’re not stock, 99% of them in Ireland follow the same formula. You could bet your house that they will have at least wide arches, Cibie spotlights and either a SOHC Pinto or C20XE ‘Red Top’.

You see, a lot of owners are trying to relive the Escort’s glory days of rallying in the late ’70s and early ’80s. They want to try and get a taste of what Vatanen, Waldegård, and Mikkola et al. experienced, and there’s nothing wrong with that in the slightest. Who wouldn’t want a tribute to Vatanen’s ‘Black Beauty’ in their garage?

The only problem (if you can even call it that) is when everyone is chasing the same thing, the cars ultimately all start to look and feel the same. It becomes hard to feel excited when faced with another rally replica, regardless of how good the car is.

The owner and builder of this particular Mk2 Escort is slightly different in that he doesn’t need to try to chase the experience of being a rally driver, because he actually is one. Eric Calnan has been piloting his Peugeot 106 GTI regularly on Irish rallying stages since 2013, and the 106 is the reason he decided to finally start building the Escort in October 2019, a car which he picked up way back in November 2009.

On the 2019 West Cork Rally, Eric ‘glanced’ a tree with his 106. This wouldn’t be an issue at normal/sane speeds, but the 106 was on the rev limiter in 5th gear, at an estimated 118mph (190km/h). Naturally enough, Eric continued on and won his class by eight seconds, but when his brakes failed two stages later, he decided that was probably a good time to call it quits for the day with his now narrow-body rally car.

It was also time, he figured, to start his Mk2 project.

“The car actually only came from CAB [Cork City's main Ford dealer since 1925] around the corner when it was new, although it was built in Germany,” Eric told me as we started to take a look around his car in Cork City’s harbour district.

There’s a strong connection between Ford Motor Company and Cork, with Henry Ford’s father originally coming from the Irish county and Henry himself opening Ford’s plant there himself in 1917. The plant closed in 1984, but the area is still fondly associated with the auto manufacturer. “Ford is a Cork company, it just has an American branch,” one former worker told The Irish Times in 2017.

It felt fitting then to be shooting Eric’s car around these parts, although I don’t think either of us were too concerned with the past. Eric certainly wasn’t, as this Mk2 is very much his own car.

There’s undoubtedly a motorsport influence here, but it’s kept just below the surface. The uncorrupted standard body lines are an absolute treat when almost everyone else has cut their panels to fit forest flares or tarmac-specification rally arches. The English rear axle had to be narrowed 18mm either side to accommodate the 13×8-inch Minilites under the stock bodywork.

The exterior features subtle touches of carbon fibre on the bumpers and rear spoiler, with two LED spotlights neatly integrated beneath the front grill. Eric doesn’t like the usual large spotlights on the front of Escorts, but still wanted the benefit of extra illumination after hours.

The real joy of this car is only discovered when you start looking beneath its skin.

Within the confines of a carefully smoothed and crafted engine bay sits an early example of Ford’s renowned 2.0-litre turbocharged YB Cosworth.

With what Eric describes as being “enough” power, the Garrett T3-equipped YB has been built for usability and reliability. “The car only has 175-wide rear tyres, and it spins them easily in 4th gear, so it probably doesn’t need any more power.” Rare words indeed for a rally driver.

All of this is managed by a MaxxECU Mini and monitored via an AiM MXP Strada digital dash.

The real party trick is the discreet red, green, blue and black buttons located within the factory ashtray. In order, they control anti-lag, high/low boost and virtual fuel tank trip with the black button being the first stage of three-stage launch control (the other two stages being the clutch switch and vehicle speed).

Naturally, the original factory driveline wouldn’t hold much hope against the YB’s significant torque increase, so Eric has followed the path of using something a little bit different to make everything work. The gearbox is a 6-speed manual from a Mazda RX-8, using a Ford Sierra clutch with Mazda slave and master cylinders. It’s bolted to the engine with an RX-8 adapter plate, while the prop is a carbon fibre RX-8 item.

The aforementioned narrowed English axle has been strengthened with bars and fitted with a 3J plate differential turning a pair of two-piece driveshafts.

The Mk2 has absolutely been built for driving. Having only completed the car a few weeks before our shoot, Eric’s first trip took him around the famous Ring of Kerry and a collection of some of Ireland’s most famous rally stages.

With Eric’s intention to use the car as often as possible, there’s also been the clever installation of a Bluetooth amplifier powering two hidden speakers which connects to his phone for long journeys.

Further to this, Eric has chosen a pair of Peugeot 106 GTI front seats both for their support and comfort. The traditional choice of Recaro ‘Fishnets’ sat too high for his taste.

All in all, it’s a pretty well balanced interior. There’s still some carpeting to be done, but Eric reckons that would keep the car off the road for the rest of the summer at the upholsterers, so it’s a detail that can wait until the winter.

Disguised behind the Minilite wheels are 4-piston Wilwood Dynalite calipers which are plenty capable of reliably hauling the Escort’s paltry 900-odd kilograms (1,984lbs) of weight to a stop.

A fuel cell with remote filler, fuel pumps and a full-sized spare wheel are located in the boot, along with the filler neck for the relocated washer bottle.

What we have here then is a Mk2 which both conforms to the Mk2 ethos, but in a roundabout sort of way. It’s a subtle enough looking street car, but possesses a level of performance that would humble most other cars on the road here.

I can’t imagine a time where there won’t be love the for the Mk2 in Ireland, such is its icon status. Even mid-shoot, there was a constant stream of polite comments and inquiries from passersby.

Some of this is likely due to the car’s disarming exterior, which might suggest it is one sort of thing, while in reality, it’s the complete opposite.

As Eric performed a contemporary interpretation of the Irish Goodbye and headed for home, I was left to re-evaluate everything I thought made a Mk2, a Mk2. I just hope more people realise that even for a car with such a well-proven recipe, you can always add a little bit more spice to the mix.

The Ford Escort on Speedhunters 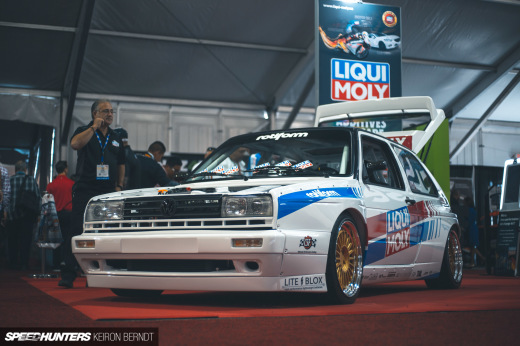 Much as I love Escorts I find myself constantly seeing the wheels as too small in proportion and the nose up stance all wrong. They were always fun to drive and we drifted everywhere in them long before drifting was officially a thing though

That's bloody lovely that is.

Apart from the tyres. Right size wheel but it looks under tyred. Old escorts always look a bit odd to me with low-pros.

Mk 1 & 2 Escorts are always lovely but I'd like to see some more rubber on this one, just a personal preference. Thanks for the article, please do feature more classic European cars; Opels, Fords, Vauxhalls etc. Not counting the BMWs, which there is enough coverage of.

Beautiful car but someone forgot to put back the "wing/door" mirrors.

There’s just something about a stock bodied car with obscene amounts of detail thrown in the mix that does it for me.

So refreshing to see a MK2 built like this on the emerald isle. Proper street style.

Ultimate Mk2 in my eyes right there

Awesome piece of work and the whole feature was a real treat. Thank you.

Good to see an Escort without cut-fender, add-on fender flares, oversize tyres, etc.
There is no need for sticker bombing to immitates race car.

All in all, this Escort has it all that are needed, required and what matters. Great car!

Maybe one day mine can mirror this engine wise.

Hi Paddy , can you confirm if those wheels are watanabes or mini lites ?
The article says minis but they look like watts to me - keen for a set if there’s an identical watts alternative without the difficult to get factor !

13x8 offset 0 or even -5. Would be the specs i believe, many shorten the axle to get it to fit under stock arches.

Zoomed in on a pic and indeed they’re mini lites. Must be the offset / colour combo that makes them look so good

Lots of people saying the tyres are too small couldn't be any more wrong! MK2 with 175/50/13 is the ultimate combo. No other choice allowed.

I see I'm not the first person to say this, but the wheels always seem to look too small and the arches not high enough on these things. Having said that, this is awesome - I feel like you can tell it's been built by a serious racing driver, because there's no old-school stuff just because its old-school cool. it's kept the period-correct elements precisely where they should be kept, and used modern technology from disparate sources where it can make the biggest difference. Coil-on-plug ignition from Honda, Mazda driveline bits, Peugeot seats, digital dash, Bluetooth audio, LED lighting and comprehensive engine and launch control management. Love it.

I have always been a fan of clean factory lines, and this build has been executed perfectly. Amazing shots Paddy