It doesn’t particularly bode well for a project update when you have to seek out the previous installment to catch yourself up. Needless to say, Project Habu is very different to my previous GTI.

Project GTI started as a basic unmodified car, which I slowly built up over time to my ideal spec. With Habu, I’ve started with something which was already more potent from factory, along with having already been evolved by its previous owner.

Before I took ownership last October, the Golf R Estate was already running around 385hp courtesy of APR Stage 2 software, a Milltek 3-inch turbo-back exhaust, APR cold air intake and what I think is a RacingLine front-mount intercooler. There is also RacingLine 4-piston front brakes and some small cosmetic changes.

The main changes I made prior to this update included fitting my 18-inch RAYS Volk Racing TE37 Sagas, adding a RacingLine carbon rear strut brace, a P3 gauge, changing the APR intake for an Eventuri intake, and replacing the Milltek down-pipe for a Scorpion one with a 200-cell sports catalyst. Power is hopefully a hair closer to 400hp at this point, along with a healthy 525Nm (approximately 390ft-lbs) of torque.

The lack of Project Habu updates since purchase haven’t been because of a lack of things I want to do, despite how impressed I’ve been with the car. Rather, I just haven’t had the opportunity to really explore the R’s capabilities in order to figure out what I really need to change.

While the car has served as a more than capable workhorse over the last few months, these particular situations don’t seem to really exert much in the way of pressure on Habu. I haven’t really learned much driving from shoot to shoot, save for how bloody practical it is.

While it might not be very Speedhunters to be talking about practicality, Habu has made the world of difference to my working life. The convenience of being able to comfortably fit everything I need for a job inside, along with having it all easily accessible (which is the important part), has been a revelation.

That I can jump in the car after a long, hard, cold day and switch on the heated seats, set the dynamic dampers to comfort, fire up Apple CarPlay and just coast home with minimum fuss is something I really appreciate.

Another reason why there hasn’t been as many updates as you might have expected based on Project GTI’s saga, is that I’ve spent a lot more time in other cars. These have ranged from full electric vehicles to some of the best performing production cars you can buy from a showroom today.

Aside from the novelty of lording about in a new M car, as an example, these experiences of other cars have proved invaluable in figuring out what I really want from Project Habu. Over the first six months of 2021, I’ve learned what I’m willing to sacrifice from a compliance standpoint, and how much performance is actually enough.

Much like Project GTI, this is one car that must do all things. The difference here is that I feel Habu is capable of doing a lot more things and to a much higher standard than the GTI.

If you’re wondering about the name, it does indeed share its moniker with another vehicle which itself was quite fast, stealthy and carried cameras…

One of the points I raised in the previous update was that I was investigating ways of making the car more involving to drive. Nearly all VW production cars come from the factory with a huge amount of performance capability in reserve. The downside is that they can feel quite neutral, but it’s relatively easy to realise this potential.

Following one or two quick blasts across the Wicklow Mountains, I decided I wanted the car to rotate easier, and fitting a better compound brake pads would endure my driving style for longer.

In order to address the vehicle’s turn-in, I had the rear factory sway bar replaced with a 25mm H&R bar, and increased the front track width by about 10mm total across the axle.

For the brakes, we upgraded the front pads from RacingLine’s street compound to their middle-of-the-range fast road compound.

The difference the rear bar in particular made has been utterly immense. Its effect could be felt immediately after fitting, making the R much more eager to change direction, which in turn has brought the steering feel to life.

The brakes continue to work from cold, aren’t particularly noisey and stand up to much more torture than previously. All in all, these few small upgrades have made a considerable difference to the car.

Upgrading the factory Discover 6.3-inch screen to the larger 8-inch Discover Pro screen was an opportunistic one when I spotted the larger screen on eBay Germany one afternoon.

In a Mk7 Golf, all the technical bits for the entertainment system are in the glovebox, so this was just a case of swapping the displays (and the correctly-sized trim surround), which took around 15 minutes all told. I always felt the original display was just a bit too small considering the rest of the features it relays, so this upgrade was time and money well spent.

I was recently able to sneak some (wet) laps in at Mondello Park while covering a private test day, which was my first proper taste of the car on track. The inordinate amount of liquid falling from the sky was certainly a major limitation, but I came away absolutely delighted with how Habu behaved despite the conditions.

In essence, it drives like a good FWD car on track (which is a good thing in my book), but without the traction limitations. You need to be precise with it, but it’s ruthlessly quick in, through and out of corners.

Its only shortcoming was my discovery that it still has factory brake fluid, which boiled after a couple of laps and resulted in an unexpectedly long brake pedal and a bit of a moment coming under the bridge towards turn one at 170km/h. It was a good day to wear my brown underpants.

Otherwise, the car has been both remarkable and unremarkable at the same time. It can be so incredibly docile one moment, and an absolutely whaling banshee of a thing the next.

It can be fast, it can be slow, it can be frugal and it can be quite fond of a tipple, as fellow Irish Speedhunter Cian Don would say.

Still, the more I drive it, the more I learn and the more I love it. I honestly have no idea what I could ever replace it with – not that the thought of replacing it pops up very often.

It’s not without its faults, however. The standard seats aren’t great (from both a holding and aesthetic perspective), the steering wheel is too thin, the Piano Black interior trim is a pain, and the rear lights are hilariously basic compared to the non-estate R’s LED tails.

Some of those things I can deal with; others currently either don’t bother me enough to do anything about them or cost as much to sort as a good week at the Nürburgring.

I mean, I can’t even see the taillights from the driver’s seat anyway, right?

Habu, AKA Project R, on Speedhunters

Project R: The First Steps Are The Most Important

It doesn't matter how much you modify your car,you cannot escape Corona Chan's loving embrace!

I'd use 'mountain biker' loosely these days, haven't been out nearly as often as I would have liked so far this year. Hills seem a lot steeper than they used to as well, for some reason...

The Golf R Estate just makes such a nice all-round vehicle
This is a really cool project!

It's reading articles like this that has me thinking about condensing my fleet from 5 vehicles to possibly 2 or 3. Having 1 vehicle that can I can live with as an 'appliance' but still ticks boxes of being an enjoyable choice to hope in at any given moment, while also being capable to carry out a the mundane tasks I would need it to do so with like hauling lumber or garbage.

I'd love to have multiple options, but it's not really feasible here for my current situation. I would love something older and much more analog to provide balance in the future.

Looking brill. A suggestion for boiling brake fluid would be RS3 Brake ducts. for around £40 are said to drop max temps by up to 40C on track. I have these on my GTI and a good cheap little mod.

Good shout, I ran the same on my GTI and they did make a difference. Probably just better fluid & those should solve that particular issue.

Paddy, does the estate not get the same seats/wheel as the standard R? I have US MK6 R and the seats + steering wheel are really good in my likely limited experience compared to what you've seen. Is the rest of the car that good and you're just digging for something wrong with it?

MK6 seats & wheel are slightly different to the MK7, and I actually prefer the MK6's.

They're not -awful- in the MK7 by any means, but I just think they could be better / trying to justify a pair of Recaro CSs to myself!

There is something to be said about a nice car that just works. I made a similar trade earlier this year (though much lower performance than your 400hp super estate), and I seldom miss what I gave up. Of course, as other commenters have pointed out, having more than one steed in the stable helps this considerably.

I thinking the author meant, "wailing banshee of a thing," not "whaling banshee."

I don't know what I mean most of the time, TBH.

What type of mount are you using in pic #5 @paddymcgrath?

I 'think' it's a Gecko mount, or something along those lines.

Love the write-up and I couldn't agree more on your summary of what the Golf R handles like. I am curious to the size of those Volk wheels and the spacers that you are running on the car to clear the big brakes and get that great fitment?

The screen swap is genius!

VWs remain as Lego for adults, couldn't have been any easier.

I recently purchased a MK7.5 Wagon (Estate) in the hope that it would be one car to do it all, and so far it hasn't disappointed. Interested to know what's been done to lower the car, springs on oem shocks, or coilovers? Glad you seem to be enjoying it Paddy, hope to see some more updates in the future.

It's on factory dynamic dampers with H&R springs. They lower it nicely, but are a bit harsh so other options are being looked at...

Reading and learning about your Estate here makes me want to get one myself, however I don't have enough money at the moment nor can I find a pre-facelift R Estate, on post-facelift models. Perhaps the pre-facelift R Estate wasn't sold in Australia. But anyway, would it be possible to get this image in it's original size? I'm trying to make a couple different wallpapers out of it but the 1080 x 1920p isn't the best resolution for this hahaha. 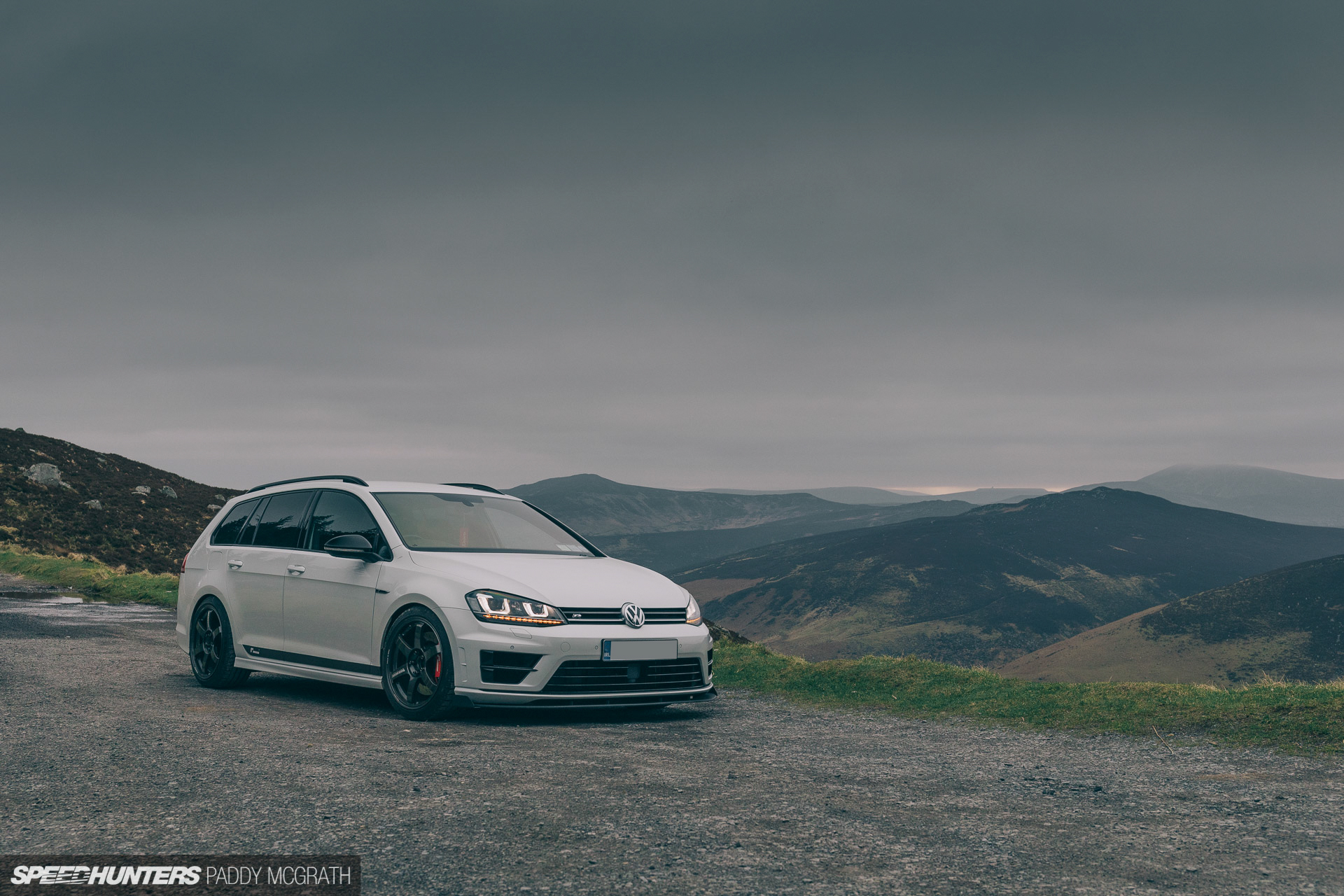 Sure thing, mail me on the e-mail provided above.