Every single one of your senses is being assaulted at once.

Thick dense smoke surrounds you, limiting your vision and blocking the sunlight. The acrid smell of molten rubber lines your nostrils and almost certainly your lungs. Meanwhile, an unholy V8 symphony blasts your eardrums from somewhere amongst the swirling carnage below.

This is no Mad Max-esque dystopian future. Welcome to Australia, 2021.

While Max and his Interceptor were nowhere to be found at Sydney Dragway last month, I’m sure he was there in spirit. Or more appropriately, up in smoke.

Australia has had a fairly easy time with this whole COVID situation when compared to most other countries, but life here has not been without its sacrifices or casualties. Like elsewhere, our events calendar has been left a little lean.

Headlining the hit-list on Australia’s car culture calendar is of course Summernats, but for the first time since its inception in 1987, this iconic event could not go ahead in its normal form.

In a bid to salvage the train wreck left by the pandemic, organisers were forced to rethink the festival and try to craft something fun around the myriad of regulations and restrictions in place.

Sure, it was never going to be a true Summernats, but after living through 2020, who could be mad at any form of tyre-blowing event to usher in a new year?

The end result: Summernats Slam, a stripped-back, three-day event held at Sydney Dragway, fully compliant with the 18 billion government requirements to try and keep punters safe from themselves and each other across the weekend.

Don’t worry though, we still know how to party.

Police even hovered above at times across the weekend to let the crowd know they were serious and were monitoring the attendees. I’m not overstating it when I say reminders to mask up and distance interrupted the commentary and event radio every minute, so I can’t imagine the tightrope the team behind the Slam had to walk to get one of Australia’s very first sizeable events in the Covid era across the line.

Perhaps I’ve already forgotten what a real event should feel like, but I appreciated the vibe – even with the crowd limited in size by pre-purchased tickets, interstate entrants almost an impossibility, and hell, at the time, half of Sydney ordered to lockdown. Summernats Slam had sun, steel, smoke, and most importantly, other people. Mad!

Typically, Summernats is the highlight of the Burnout Masters calendar. Yes, burnouts are a legitimate motorsport competition down under.

Rather than rehashing my opinion from the boring side of the fence, I thought it might be more fun to have an entrant talk us through what slaying a set of tyres in front of thousands of people feels like. Husband and wife duo, Brad and Brit Kilby, who steer one of my favourite skid pigs, Hammertime, were happy to share their experience with us, including how they got mixed up in the Mad Max lifestyle.

Love it or hate it, this LS-powered Daihatsu Feroza is an unlikely hero that stands out among the Holdens and Fords. It’s a tyre-frying mini monster truck that’d blend in seamlessly on the set of Fury Road, or the Transcontinental Highway.

Brad holds his eldest brother responsible for his entry into the burnout world after he brought him along to skid competitions as a young boy. Then, as a late teen, Brad took a girl along to the Kandos Street Machine show. It must made a decent impression, as the pair have never missed one since, even now with their young family in tow.

Hammertime joined the family in late 2015. It wasn’t quite the beast you see today, but it was already packing a 5.0-litre V8 and a decent transmission. Not bad for $800, right?

After a quick coat of black paint and a tail shaft loop, it was sent out to skid with the best at Kandos in 2016 and 2017.

Inspired by their eldest son and a desire to be different, the baby monster truck you see today was completed in April 2017. A fresh Feroza body was mounted to a heavily modified 1999 Nissan Patrol chassis. Untold hours of work went in while 560mm was lopped off the wheelbase to help the jigsaw fit together.

Keeping engine temps as low as possible is supercritical during burnouts; not only are you hanging off the rev limiter, you’re also sitting stationary, and often submerged in smoke on 40°C+ (104°F+) asphalt. The boys at South Coast Radiators fabricated the mother of all radiators to help Brit and Brad keep their cool.

The rest of the build was carried out at home in the Kilby’s garage.

And as for the name, Hammertime? Well, obviously MC Hammer was involved. Britt suggested the name on the way home from picking the little truck up. The kids laughed and the rest is history.

Welcome To The Thunderdome

Green light! Green light! Drop it, punch it, and leave it all on the pad. Nothing in the world exists outside of you, your ride, and the energy from the crowd. It’s one hell of a rush.

Brit tells me each skid, without a mechanical issue, is better than the last. Experience slowly replaces nerves. Starts are the tricky part, but as time passes this usually gets easier too, giving the driver a little more capacity to take in the spectacle of a wild crowd from the best seat in the venue. The mighty little Feroza won the Slam’s Best V8 Burnout.

Popping the eighth set of tyres off the rear end and burning through another 20 litres of methanol together, the couple agreed that their main run was unreal. Tyres off, rods in – they couldn’t be happier. 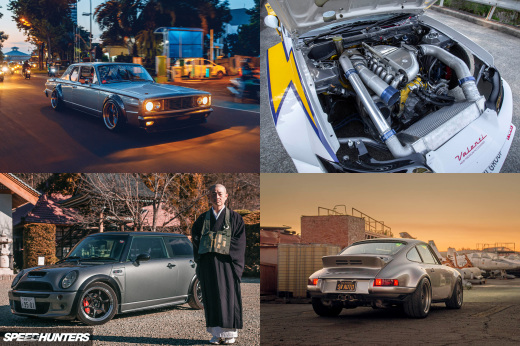 Revisiting Some Of Our Favorite Features Of 2021

So good to see some Summernats action, even if the full event couldn't go ahead. Just wish I wasn't stuck in Queensland as it all went down!

To an outsider, this looks like the most Bogan thing ever! Bet it's a proper laugh though.

It's Bogan Mecca. Can confirm it from the inside as well as outside. But yes, it's a heap of fun and something that everybody needs to experience at least once.

I went to the dragstrip at Hidden Valley in Darwin, NT back in 2015. The burnout contest was nuts! People built purpose-built burnout machines. Also, don't stand on the front row, chances are you will be hit by a piece of rubber and when the tire lets go it is really loud.

So as I look at the event I didn’t many (Any?) masks or much distancing…good to know why we can’t have events these days.

We'd had 3 or 4 cases in the month prior, most of which were overseas or in the quarantine areas. Until some dude on the Northern Beaches decided to lick all the door handles in his local pub and caught it as our first local case in a good while. True story, look it up. #Straya!

In Australia, corona virus is almost non-existent. The only new cases we get are from overseas travelers.

Apparently the flu is almost non existent here in Australia too. My local GP says he isn't seeing anyone coming in with the flu either. People washing their hands and not coughing and sneezing on others has done wonders.
I have been watching the amount of SUV's and dual cab utes on the roads increasing almost daily and have been wondering what will happen to the car scene here in Australia in future years. The manufacturers are not producing many cars that are actually fun to drive (the awd Yaris and a few others are the exception).
It appears the love for the actual drive is being lost. People would rather an auto (changing gears manually is so tedious) have all the safety gear so they don't have to pay attention to what they and others are doing on the road. All the while they can play with the touch screen while driving through traffic instead. All these "advancements" are creating a disconnect between the art (and fun) of driving (and driving safely and attentively).
Then I read an article about a Feroza winning a burnout competition at the Summernats. Maybe all is not lost

Looks like a blast, great to see things getting back to normal. Can't wait to take my kids to some drag racing here in SoCal as things open up.

I guess it ain't over for the SkidPigs until you see (lots) of smoke at your rear end. Seeing fire is a bonus.

Fire is like entering the bonus stage between normal levels. :p

Naaaaah, they're fine; not even a virus can withstand that amount of tyre smoke.
I'm really surprised they were able to organize the event, even on a very small scale, while F1 was obliged to postpone (maybe cancel) the Australian GP.

Two very different events. Mainly the cost and where the audience/competition has to trek over from.

F1 is a completely different thing, moving the date isn’t just due to spectators it’s about the restricted travel into the country and mandatory quarantine for all participants and team members.
It’s too risky planning it because of that international concern, easier to postpone till later in the season

Nice HQ Ute! I had one many many moons ago. I sold it for $650 and shudder to think what they sell for now.

Each year when reading about Summernats I'd think "this is just batshit crazy"(in a good way), but also I'd get sick with the ole' burnouts and smokes by the end of the story and think what else is new, but time after time I kept coming back, it just never gets old!

Hell yeah this is why I love Australia!

And not a single photo with JLBens,s LOL.
Need to get you on the Summernats podcast man...