Unless you’ve taken residence in some sort of subterranean community, you’ll at least somewhat familiar with import tuning culture.

The influence of the Japanese way of modifying cars has permeated nearly every automotive sub genre, but 30 years ago, especially in America, this wasn’t exactly the case.

Mazdas, Nissans, and Hondas were viewed by many as disposable vehicles, and second fiddle to the ‘superior’ vehicles produced on American soil. As a result, respect while driving an import was incredibly hard to come by.

I’m am too young to really remember this time, but Junior Asprer knows what it was like first hand. In the Honda community, his passport is stamped triple OG. He’s considered a pioneer that imported JDM parts into America long before the term JDM became commonplace and shoshinsha badges popped up everywhere.

Junior first made his name known racing in the streets before trying out the show circuit with his 1988 Honda Civic. The little Honda was fitted with nearly every part from the Mugen catalog designed for the EF chassis.

Again, this was long before Mugen became a brand knocked off and slapped on bright yellow seat belt covers sold at mall kiosks. Had Junior kept even a fraction of the parts he had on that Civic, he’d be able to sell them for a very handsome profit today.

But back then, Junior had no idea that ’80s and ’90s-era Mugen parts would become so desirable in the future. He also had a new vision for the Civic.

Ahead Of The Curve

After receiving a few show accolades, Junior’s focus shifted toward making drag racing history. It was the middle of the 1990s at this point, and front-wheel drive cars were still a novelty at the drag strip. No serious drag racers could even considered a platform where the ‘wrong’ wheels were driven.

Breaking into 11-second ETs with a turbo single cam four cylinder quickly left people wondering who Junior and his Redline racing team were. Still, earning attention, but not quite yet respect outside the import world, Redline took the bar they had set themselves and pushed it even higher.

The once show-ready EF was sliced, diced, and draped over a NHRA-spec chassis. A few Mugen parts were maintained, but the original FWD layout was not. Furthermore, power now came from a 3.2L Honda V6.

Unfortunately, with over US$80K spent and countless hours devoted, industry hurdles began to derail the project. Out of patience, and capital, the Civic was sold before completion. Shortly afterwards, Team Redline members moved onto new ventures, both automotive and non.

As the dust began to settle, Junior used this as a cue to fade to black with little fanfare. He became somewhat of a myth as the years grew between his last build and the present.

To rekindle his love for wrenching, Junior switched mostly from working on cars to building Harley-Davidson motorcycles. The bike community provided a welcome escape from the thoughts of ‘what if’ that were left after the bittersweet ending with the EF.

But, as they say, old habits die hard.

Prior to Junior taking ownership of this first generation CR-X, it belong to his friend Calvin, and he had consulted Junior ahead of purchasing the car for a blessing of sorts. Junior agreed it was a worthwhile starting point for any build, going as far as to say if he were to get back into the scene he’d love to do it with this car.

Realizing the car deserved better, Calvin called Junior to make an offer and things progressed quickly from that point on.

When Keiron sent through these photos, I have to admit that I geeked out more than a little bit. A first generation CR-X itself is rare these days, but one wearing a complete 12-piece Mugen Aeroline kit is Sasquatch-without-a-wrist-watch levels of rare.

Junior regards this as perhaps the most complete street-driven example of such a beast in the entire United States.

Yes, other examples in the States wear this kit, but Junior’s is not only authentic, it has every optional accessory right down to the incredibly rare locking gas cap.

Care has also been taken to update the corner and tail lights to the Japanese market items that the kit was designed for. The stock mirrors also looked out of place, so they were swap to Mugen N1 pieces.

Overall inspiration for the build was drawn from a very similar CR-X that existed at one point in Japan, and that car wore a very particular set of flat-faced wheels. Made by Fortran, these ASSO model wheels are incredibly period correct, and different.

But, Junior was also very much a fan of the more common, but still hard to come by Mugen CF-48 wheels. Luckily, cars have two sides that are not easily viewed at the same time.

Both wheels are 15 inches tall and six inches wide, so there are no performance detriments to the car’s visual duality. Suspension came care of Heeltoe Auto and their Medieval Pro Damper kit and torsion bars. Energy Suspension bushings have been used throughout to replace any worn factory items.

As a whole this car is more resto-mod than it is show car. It’s meant to be well kept, but also well driven.

As a result the engine bay is clean, which helps with maintenance, but nothing has been deleted, tucked, or shaved. The motor even appears, largely, factory.

However, hidden in plain sight is a balanced and blueprinted long block, complete with forged pistons, ARP hardware, and all new gaskets. The oil cap is a Mugen piece, as is the exhaust.

The upturned exhaust is so era-correct that it almost hurts. Almost.

E-Qz With The Alpine Deck

If you ever rode in an ’80s Honda – and bonus points if you did so in the ’80s – then you’ll already know what the interiors were like. Comfortable, but just a little coarse; somewhat like a room full of corduroy.

The interior of this car is in as good shape as the exterior.

Modifications inside are slight, but no less fitting. Junior buckles into a Mugen S1 seat while holding onto a Mugen SW-36 wheel and kicking Mugen pedals.

Just ahead of the Mugen Formula shift knob, overpowering the sound of the 1.5L motor is an Alpine cassette deck and matching speakers. This marks the only time I’ve mentioned a tape deck in my tenure as a writer.

As much joy as the CR-X has brought him to drive, the main thing it’s done for Junior is reignite his passion for cars. Now, he can look back at the past and look at it for what it was: a learning experience filled with great times.

These days Junior is less interested in making a name for imports, and more interested in simply enjoying the journey. All pioneers deserve to ride off into the sunset, and I don’t think any could have picked a better steed. 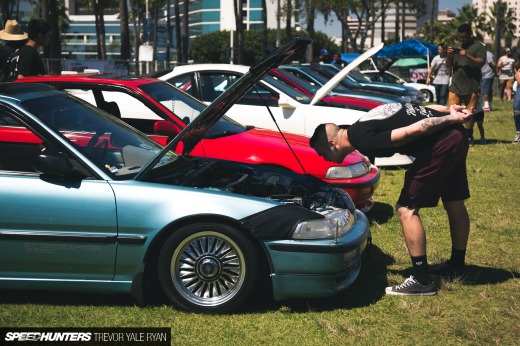 ’90s Dreaming With Honda At JCCS

What a car... Still have a boxed Tamiya Honda 'Ballade Sports Mugen' CR-X Pro (with optional roof scoop no less) from way back in '86. It will get built - one day. I bought it as my first company car was a 2nd gen CRX in silver but I couldn't track down a kit of it at the time. Fond memories.

Those are awesome model kits by Tamiya.

Check out @garageHEART124 on insta, they built a very cool looking 1/24 Mugen Pro.

It's not for me but I can respect the build and the desire to make it period correct.

My first thought upon seeing the teaser image was the exact same as Stickydigits: the Tamiya Ballade Mugen CR-X Pro sitting on the shelf since... well, forever. I love this tiny car with the big, boxy flares. Great article with stunning pictures. Gotta love the monochrome atmosphere in these shots. Well done!

Meanwhile, I'll post a picture of a Tamiya narrow body CR-X for you to enjoy, built many moons ago. 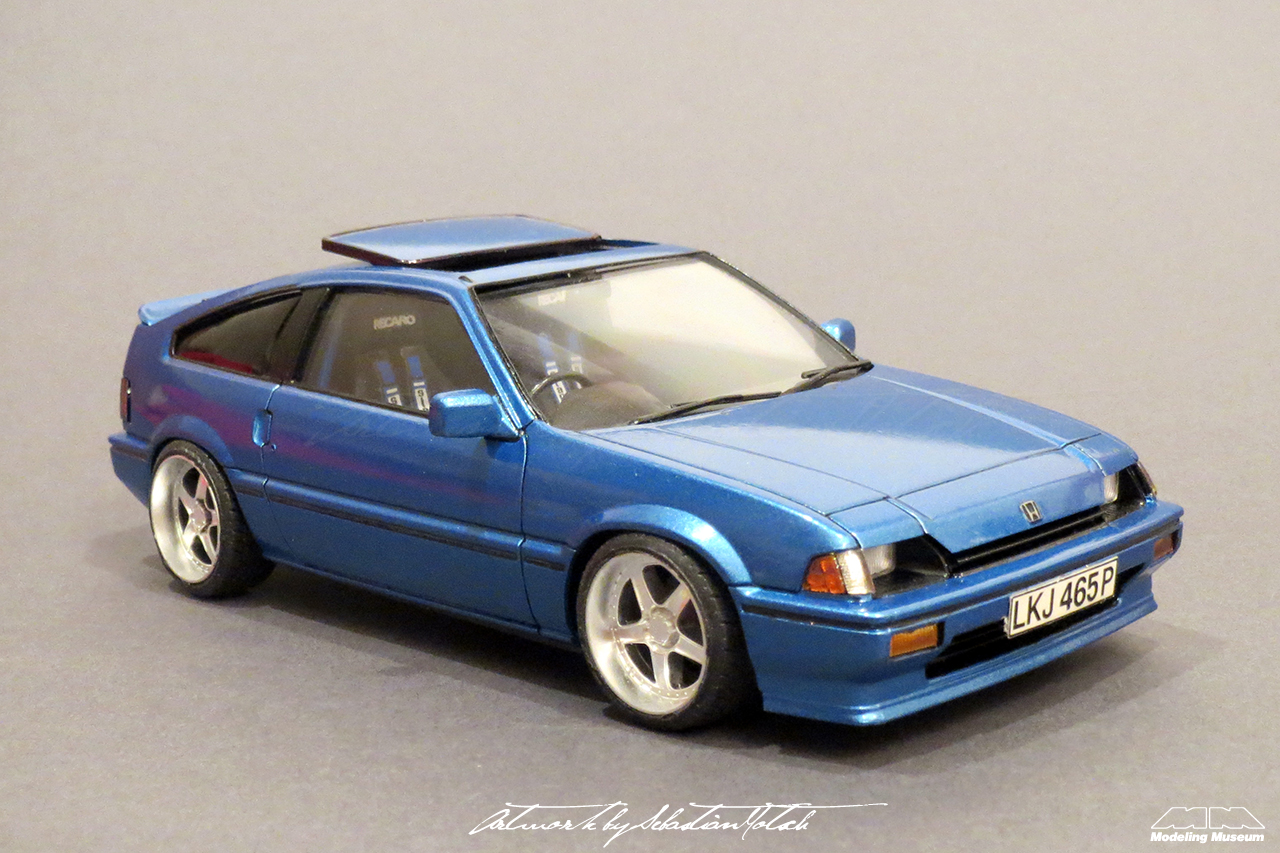 For some reason this CRX is giving me Akira vibes

I think it's the (excellent) colour palette and treatment Keiron has gone for with these shots that accentuates that vibe.

You blokes have absolutely outdone yourself with this feature. I'm not a period-correct adherent myself, but this is glorious. Perfect photos from Keiron and lovely prose from Dave.

Junior's name is well known in the drag racing industry. And this CRX is properly done! Love it!

Well written and brilliant pics. One of my favorite articles on this site.

I remember reading about Junoir in my Super Street magazines back in the day. Great to see the OG’s coming out of hibernation.

I had a late 1991 CR-X and in June of 1997 at 19 years old it was stolen from Circuit City where i worked, 24 hours later I got a call from the police from a city 30 miles away telling me they found my car. I went to the junk yard that next morning to look at it and there was almost nothing left to it. I was heartbroken, 23 years later I still think of that car and want it back. Seeing this car really makes me think back to those great times I had with that car hanging out in the roadshow all night working on our cars.
This is an amazing looking car, period correct and just a cool looking fun to drive car!!!

I went to high school (Daniel Murphy Catholic High School) with Junior and remember his love of Honda Civics back then. After high school, it was cool to see his cars progress in the likes of Sport Compact and Import Tuner magazines. And then like the import scene, he faded.....kinda always wondered what happened to West Coast pioneers like he and Adam Saruwatari..

Outstanding photos.
Fantastic and captivating words.
The car? What a stunning piece of everything that is great about the 80s and the japonese car scene.